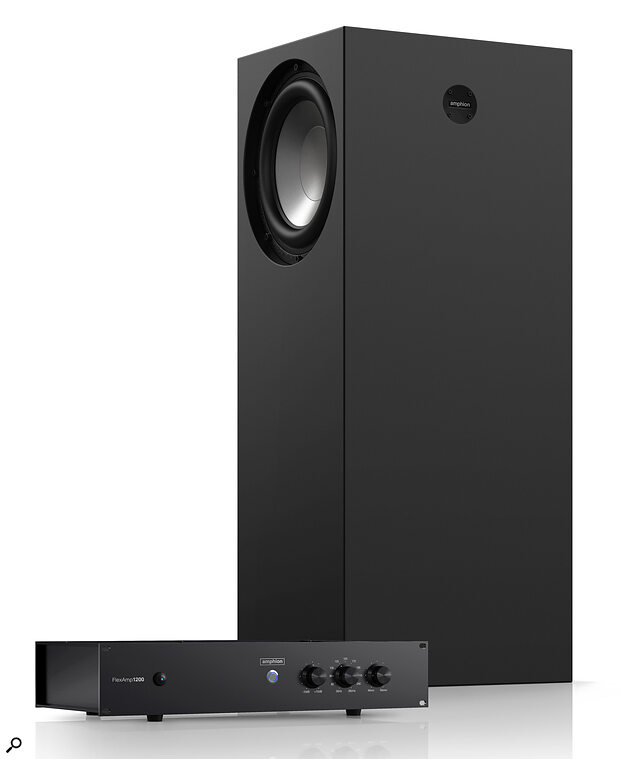 Finnish speaker designers Amphion have been growing a steady and devoted list of users over the last four or five years, with their distinctive, minimalist‑looking speakers becoming increasingly visible in professional studios. Originally a hi‑fi company, they now produce a range of studio monitors that are somewhat unusual these days in that they are all passive (the vast majority of new studio monitor releases are active or powered designs). SOS reviewer Phil Ward heard plenty to like when he reviewed their One15 and One18 models back in 2017, and if you’re interested in some of the technical background to their designs that review is well worth a read: www.soundonsound.com/reviews/amphion-one15-one18.

For review here we have their FlexBase25, which Amphion describe as a “stereo bass‑extension and management system”. The core concept of this system is Amphion’s belief that even very low frequencies need to be reproduced in stereo to be truly accurate. This goes against the common perception that, because low frequencies are non‑directional, subwoofers don’t necessarily need to reproduce the left and right channels separately. The FlexBase25 System is Amphion’s solution to what they see as a shortcoming with traditional mono subwoofers, which they say can create more problems than they solve. This intrigued me as, although I haven’t auditioned a huge range of subwoofers, the ones I have tried have always, to me, sounded slightly disconnected from the music, and whilst they can provide useful information when mixing, it’s not entirely obvious how that often ‘fragmented’ low‑frequency rumble relates to real‑world listening!

The FlexBase25 system consists of a single stereo speaker cabinet that houses two opposite‑facing 10‑inch drivers in a sealed‑box design, plus a separate rack to handle amplification and signal processing. The cabinet needs to be placed on the centre line between your main speakers, with the drivers pointing perpendicular to the listening position. Its dimensions are a substantial 840 x 342 x 321 mm, and it weighs in at 45kg. The FlexBase25 is capable of putting out a maximum 117dB SPL, and has a low‑end extension down to 20Hz (‑3dB).

The cabinet has just one input: a single Speakon connector positioned at the rear of the cabinet. This is intended for connection to the FlexAmp 1200, an essential part of the system that provides 2x700W RMS at 4Ω of output power in a 2U rack. The output from your interface or mixer goes to the FlexAmp’s input, where it is then distributed to the main speakers.

Typical subs might have a few different crossover options, but the FlexBase25 has a very flexible set of controls. Three main dials on the front of the amplifier rack allow control over the crossover frequency (which can be set anywhere between 35 and 260 Hz), the overall level of the FlexBase in your system, and how far between mono and fully stereo you want your lower frequencies to be. There’s a small bypass switch on the front, as well as a jack input on the rear for an external footswitch. The main inputs and outputs are on XLR, with connection to the FlexBase25 cabinet via Speakon as mentioned. Lastly, there are also XLR connections to accommodate a separate LFE channel if required.

The FlexAmp 1200 provides the FlexBase cabinet with the necessary amplification, and also provides control over the crossover frequency and stereo width of sub‑bass reproduction.Photo: Press pic

The FlexBase25 system arrived at my studio in a large wooden crate, which drew some inquisitive looks from the courier. It’s definitely a two‑person job to get the speaker cabinet into position, and it became obvious it was not going to be entirely straightforward to get it up and running in my control room. Due to the smallish size of my room, I have to have my mixing desk and monitors fairly close to the wall. I also have my speakers positioned on a custom‑made shelf that covers the small gap between the back of the console and said wall. To get the FlexBase25 system up and running I made just enough space behind the console so that the cabinet could sit between the speakers but below the desk. I knew this wasn’t ideal, but my thinking was that I could use it as a conventional mono sub to start with, while I sought some guidance from Amphion about how best to use it in my studio.

It actually sounded great used in this basic way, but Amphion founder and CEO Anssi Hyvönen was quick to reply to my email and recommended that to truly get the most out of the stereo system in setup, the cabinet would need to be raised so that at least the tops of the drivers were above the height of the console. This wasn’t an impossible suggestion, and Anssi recommended paving slabs as a way of getting the extra height. In order to properly assess the full potential of the system, however, I thought it best to move it to a separate mix room at my studio that has no console and plenty of room to play with.

I’d been using the FlexBase25 as a mono sub under my desk for a few days initially, and even in this limited capacity, it sounded better than any other sub I’ve encountered. I was supplied a pair of Amphion’s One18 speakers for the review and I was very impressed with how integrated the extra low frequencies felt when using the FlexBase25 at a modest volume. Before I moved the system out to try it in the second room, I also auditioned it with my ATC SCM20ASL speakers, and it did an equally impressive job of adding the lower octave to kick drums and bass in a natural‑sounding way.

The results were quite stunning, and I sat for around an hour just listening to reference tracks with a grin on my face.

On moving the system to my other room, and without a console in the way, I was able to set the crossover at a higher frequency and dial in the full stereo option. The results were quite stunning, and I sat for around an hour just listening to reference tracks with a grin on my face. In simple terms, it doesn’t sound like a subwoofer. When used in full stereo mode you get the full weight of bass frequencies, but in a way that feels like your main speakers have been supercharged. Suddenly it feels like you are listening to a complete picture, such that when the FlexBase25 is bypassed it can feel quite deflating!

After a little playing around I had a mix job to get on with, so I settled on a crossover point of 175Hz, and set the system to full stereo. I was very intrigued to see how the mix I was working on would translate outside of the studio, as some previous attempts at interrogating a sub have led me down a path of ‘undercooking’ the bass on some mixes. Impressively, the very first mix I did using the FlexBase25 and One18s required no adjustment with bass levels whatsoever. Using the volume control on the FlexAmp 1200 I tended to find setting the level to around the halfway point to provide the most accurate results when doing critical listening, but it was also great fun to be able to crank it up and make the room shake a bit when clients were present.

The FlexBase25 is an impressively versatile system that can effortlessly perform the job of a conventional subwoofer — although it would be an expensive option in this capacity. When set up correctly, however, it provides a stunning full‑range extension to a smaller speaker system. The amplifier controls offer plenty of flexibility, allowing you to adjust your monitoring according to your needs: from subtle, tight bass extension when mixing to room‑shaking fun when tracking bass or ‘vibing’ in a writing session. My only advice to existing Amphion users would be to only try this system out if you have the means to pay for it, as you’re not going to want to give it back!

The FlexBase25 system gives users of smaller monitoring systems the option to super‑charge their monitoring setup. With the ability to set the crossover point from 35 to 260 Hz and sweep between mono and full stereo, you can easily find the right settings for your system.