Finnish company Amphion may be little-known, but they are certainly no strangers to the principles of good speaker design.

Perhaps because of our homegrown speaker design traditions, we in the UK seem to have a slight blind spot for smaller European speaker manufacturers. So Amphion may well never have blipped on your nearfield monitor radar, and if that’s the case, the first thing to know is that they hail from Finland and have a 17-year history, primarily in hi-fi speakers. And without wishing to peddle any casual cultural stereotypes, the clean, precise and economical look that typifies Amphion monitors strikes me as quintessentially Scandinavian.

Not one but two Amphion products are the subject of this review: the company’s second- and third-smallest nearfield monitors, namely the One15 and One18. Both are fundamentally conventional, passive, two-way compact monitors comprising a bass/mid driver and a tweeter mounted on the front face of a rectilinear, textured-paint-finished MDF enclosure. Along with there being something that looks intuitively right about their proportions and generally understated style, a dose of visual interest is provided by the classy, Corian-moulded and white-finished tweeter horn. I wonder if the choice of white for the horn is a nod to the Yamaha NS10?

The only obvious difference between the One15 and One18 is scale. While the One15 incorporates a 150mm aluminium-cone bass/mid driver in an eight-litre enclosure, the One18’s bass/mid driver is a 180mm unit and its enclosure is a significantly larger 15 litres. The bass/mid drivers are very high-quality aluminium-diaphragm units manufactured by Norwegian specialists SEAS. A common element of the One18 and One15 is the high-frequency driver: a 25mm titanium-dome unit mounted at the throat of the previously mentioned and gently curved horn. The horn itself extends to almost the full width of the enclosure and will have a significant influence on the high-frequency driver’s dispersion. 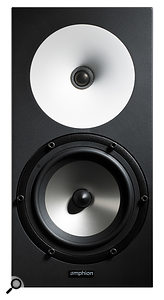 Another common element of both speakers is the way they are constructed. I wrote about a nearfield monitor a few months ago that I criticised for its cost-saving and somewhat less-than-satisfactory build quality. The Amphion speakers are at the opposite end of the scale. There’s evidence throughout of their component budget having been spent on the bits that matter, and great attention to the small details — and with speakers, it’s often attention to detail that makes the difference.

In the context of the contemporary nearfield monitor market, perhaps the most significant aspect of the One15s and One18s is that they are passive, and so require an external power amp. The vast majority of competing monitors are, of course, active, and thus come with their own power amplification. Perhaps it’s only the enduring presence of the NS10 in studios that makes passive nearfield monitors a viable commercial proposition, as without the Yamaha, studios probably wouldn’t still have stereo power amplifiers available.

Despite the apparently overwhelming arguments in favour of active speakers — namely the benefits of active filters over passive filters, and the benefits of dedicated power amplification for each driver — in my opinion, things are not really so simple. For example, in active speakers, the input stages, filtering, amplification and sometimes also D-A conversion are usually bolted to the rear panel: really the last place you’d want to mount sensitive electronics. I also firmly believe that the seat of genuine quality in a monitor is to be found in fundamental electro-acoustics and not in electronics. Yes, you can employ sophisticated DSP within an active speaker to equalise the performance shortcomings of a driver, but you’d be much better off fixing the driver itself, or using a better one, which are your only options if you’re designing a passive speaker. Even passive filter circuits, if properly (and expensively) engineered, are really not the unmitigated disaster they’re often portrayed as. So, in reality, the only down side of the One15s and One18s being passive is that any budget for their purchase needs to include a power amplifier, and it needs to be a good one if the whole exercise is not to be a waste of money. So no, that old 1970s Technics hi-fi amp that your auntie left behind probably won’t do. Amphion have themselves recently introduced a range of power amplifiers designed to work with their own passive monitors, which would seem like a reasonable place to start.

While the Amphion monitors look relatively conventional from the front, turn them around and there’s a surprise on the rear panel because, along with the expected 4mm socket and binding-post input connections, there is what appears to be another driver. On each model the size of the extra ‘driver’ matches that of the unit’s bass/mid driver: 150mm on the One15 and 180mm on the One18. Appearances can be deceptive, however, because the extra driver is in fact a passive radiator, which means it’s time for another short digression.

A passive radiator typically has the appearance of a driver because most often that’s just what it is, except without the voice-coil and magnet (the ‘motor’). It’s a driver diaphragm and suspension mounted in a chassis. The role it plays is to extend the low-frequency response of a speaker in the same way that a reflex port does: through a resonance tuned to the frequency where the natural response of the driver in the enclosure rolls off. The tuning frequency can be chosen by adjusting the size, suspension compliance and/or moving mass of the radiator, just as the tuning frequency of a reflex port is chosen by varying its length and diameter. The choice of tuning frequency, which partly defines what speaker engineers describe as the system’s low-frequency ‘alignment’, fundamentally influences the compromise between the low-frequency bandwidth extension provided by the resonance and the ‘harm’ it does to the speaker’s time-domain response. All other things being equal (of course, all 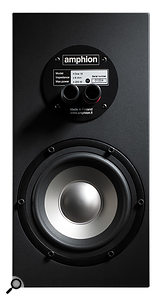 Being passive speakers, the only inputs are the 4mm sockets and binding posts. Below these you can see the passive radiator: essentially a cone without the motor, which in these models is the same size as the front-facing woofer. other things never really are equal: there are too many variables 0for that), the lower the resonance, the less it will contribute to bandwidth extension, but the less it will increase the system’s low-frequency latency (speaker designers call it ‘group delay’ but ‘latency’ is a term probably better understood in these pages).

So, being analogous to a reflex port, a passive-radiator-equipped speaker potentially has the same time-domain delay and overhang issues. However, the good news is that passive radiators are generally free of the distortion and compression issues that arise with reflex ports when the airflow through them becomes turbulent, which can happen at surprisingly low volume levels, especially if a port isn’t designed with a careful eye on aerodynamics (it surprises me still that there are monitors out there with no flaring on the ends of the port). Passive radiators also typically don’t let quite so much mid-range energy escape from inside the enclosure as reflex ports do.

Such thoughtful electro-acoustic engineering is, to my mind, an example of the kind of thing sometimes forgotten when the seductive call of over-sophisticated active speakers is heard. I suspect there’s perhaps one more benefit of this approach. The relatively narrow dispersion at the low end of the high-frequency driver’s bandwidth (without a horn, the dispersion would be significantly wider) means that diffracted radiation from the sharp edges of the enclosure is reduced.

On setting up the Amphions for listening, the first thing to consider is the rear-facing passive radiator. Both the One15 and One18 have relatively deep enclosures, so if you’re planning to mount them on wall brackets or shelves, these will have to be deep so that the passive radiators have some room to breath. A huge distance isn’t necessary (10cm or so is enough), but it needs to be factored in. The shelves or brackets, or a console meter bridge for that matter, also need to be sturdy, because neither Amphion model is particularly light.

I began listening with the One15s, positioned on my usual, and suitably sturdy, monitor shelves on either side of the workstation. First impressions were very positive and never really changed. Over the last year or so I’ve been using a hi-fi speaker, the KEF LS50 (with its reflex ports closed and sometimes with a subwoofer) for monitoring duties, and it’s a speaker I’ve grown to appreciate for, among other things, its great ability to resolve details combined with an uncannily neutral tonal balance (to my ears, anyway). It just gets on with the job. Suddenly swapping in a different monitor would normally lead to some head-scratching and aural re-calibration. This wasn’t the case with the Amphion One15s. They’re clearly different speakers, with a different character, but, like the LS50s, they do the fundamental job of communication really well. I instinctively felt I could trust them from the word go. It’s perhaps interesting that, although being completely different in terms of electro-acoustic format (the KEF has dual coincident drivers), both monitors major on carefully controlled dispersion.

At this point in a monitor review it would be conventional to describe some specific aural characteristics that the product displays, but the One15 doesn’t really have an obvious signature. It reminds me a little of classic BBC-style monitors of the 1970s and 1980s, the LS3/5A in particular: uncoloured and genuinely revealing of the fundamental quality of the input signal, especially through the mid-range. Despite its passive radiator, the One15 doesn’t sound overly ambitious with its low-frequency extension, so there’s no obvious time-domain problem. It helps, of course, that, being free of a reflex port, there are no chuffing noises or obvious non-linearity, or one-note bass effect when the volume is increased.

And the One18? It delivers more of the same, almost literally. It offers a more muscular presentation than the One15, with more low-frequency bandwidth (although, interestingly, the published low-frequency bandwidth specifications of the two monitors differ by only 1Hz), and an obvious ability to play louder with a greater sense of ease. The One18 displays all the same fundamentally trustworthy and communicative qualities of the One15. If anything, however, I was slightly less taken with the One18 than the One15. The One18 seemed to have more of its own character and was perhaps a little less refined through the mid-range. I was also a little less convinced about the bass on the One18. Maybe the One15 simply suited my room a bit better than the One18? However, I’m talking about minor doubts; if I’d have been reviewing only the One18, or tried it first rather than second, I’d still be very impressed. On the whole, with the One18 or One15, and a good power amp, I don’t see what more you can ask of a compact nearfield monitor.

Both Amphion monitors demonstrate perfectly the benefits of thoughtful electro-acoustic engineering combined with attention to detail in design and manufacture.