If you want more storage, want it faster and want it smaller, Angelbird’s portable SSDs might be just the thing...

Like lofts, garages and garden sheds, no matter how big your hard drive is, you always manage to fill it. A little extra storage is, therefore, always welcome. However, for us media types — streaming lots of audio tracks, sample libraries or video footage — that extra storage needs to be large, fast and, preferably, portable. Solid-state drives (SSDs), while still more expensive than traditional hard drives, can offer all these features, and Austrian company Angelbird have a range of compact external SSDs aimed at media professionals. So, if you have a computer equipped with a suitable USB 3 port (fast enough to exploit the performance of the drive itself), is a little ’bird a solution to your storage needs?

The model we received for review was the Angelbird SSD2go Pocket, a 512GB, USB 3 SSD and with an asking price of £323.99$449.99. The company also make less expensive 128 and 256 GB models in the same range and there are other series available offering even greater storage.

Physically, the SSD2go Pocket measures 90 x 90 x 11 mm and weighs 90g. The aluminium case seems very robust and the design is intended to be resistant to the usual bumps and vibrations encountered in mobile use; I certainly wouldn’t have any qualms about travelling with it within my standard laptop case. Connected to a suitable USB 3 port, the stated performance is sustained read speeds of 450MB/s and write speeds of 390MB/s that, if delivered in practice, would certainly offer plenty of capacity for audio and video work. 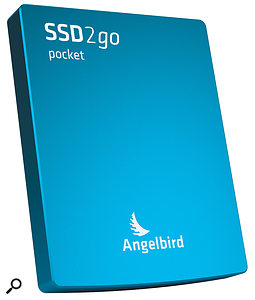 The review unit came in a rather fetching metallic blue, but, for this model, you can also choose between red, silver and black. It is supplied with a dedicated high-quality USB cable of around 30cm in length. There is also a five-year limited warranty. Angelbird have obviously got media professionals in their sights with these units as, alongside a time-limited trial of Parallels Desktop 10 for Mac, is a further time-limited, but fully functional, trial version of BitWig Studio music production software for Windows, OS X and Linux, and a number of audio production video tutorials from Pure Mix.

The SSD2go Pocket can be hot-plugged like any other USB-based drive (providing you follow the usual procedure for your particular OS). I did most of my testing using a USB 3-equipped iMac and had no issues mounting/unmounting the drive. It instantly became visible to my system and seemed very nifty when used for standard file transfers.

While I’m always a little cautious about the data generated by disk-speed benchmark software, testing the Angelbird via BlackMagic Desk Speed Test returned read and write speeds that averaged around 420MB/s and 360MB/s respectively. For comparison, the 3T 7200rpm SATA internal hard drive on the test system reported around 115MB/s in both directions, while a Thunderbolt 1-connected, six-disk RAID array (considerably more expensive and less portable than the SSD2go, although it does have much greater capacity also) gave figures of approximately 400 (read) and 520 MB/s (write). 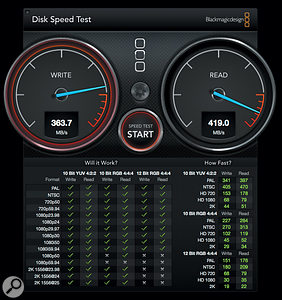 However many pinches of salt you take with your routine disk benchmark tests, the Angelbird’s performance is pretty impressive.This Thunderbolt drive could probably deliver somewhat faster performance if configured differently. It is, however, the drive that I use for all my audio and sample library streaming and its performance has never caused me any bottlenecks even when running quite busy projects. That the SSD2go Pocket gets very close in performance is, therefore, actually pretty impressive. Incidentally, brief speed tests of the SSD2go with a similarly USB 3-equipped Windows PC gave similar results.

Routine benchmarking is, of course, something different from the performance in a practical ‘real world’ situation. To explore this, I copied a few Kontakt-based sample libraries over to the SSD2go and then configured a Cubase project to run from the drive using a combination of both audio and MIDI tracks, with the latter running various Kontakt patches from the SSD2go. 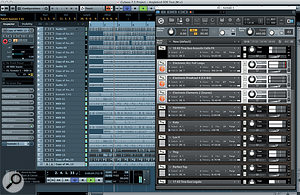 How busy do you like your DAW projects to be? The Angelbird seemed quite happy streaming all the audio and sample data required for my complex Cubase test project.While I appreciate this is a totally unscientific test, having set up a project featuring eight audio tracks and 16 MIDI tracks, I then simply set about duplicating these and offsetting them on the timeline. By the time I reached around 100 tracks in total, not only was the project making an unholy racket but I got bored with waiting for the disk to bottleneck me. It didn’t, but I did get the occasional CPU spike as my iMac tried to keep up. If you need to run a Hans Zimmer-esque mega-sample-library mock-up arrangement for your latest film score then perhaps the Angelbird will eventually run out of steam, but, for the rest of us in the real world, for typical music production projects, I suspect the performance of this compact SSD would be more than adequate and outstrip a standard internal SATA drive by some considerable margin.

If you are old enough to remember the early days of computer-based hard-disk audio recording and what passed for an adequate track-count performance, today’s generations of hard drives can seem like something of a minor miracle. Of course, we now also place far greater loads on our music production computers; more complex recording software, multiple virtual instruments, complex arrays of audio effects plug-ins and multi-gigabyte, multi-layered sample libraries. Any boost in performance is therefore welcome, wherever it might sit in the processing chain.

SSD technology, while still carrying something of a premium price per gigabyte of storage, is now getting to be mainstream. The Angelbird SSD2go Pocket will not be the cheapest 500GB of drive storage that you can currently buy, but it provides that storage in a very portable, seemingly robust and very stylish format. Whether you can justify the cost is, of course, a personal decision, but, used with a suitable USB 3-equipped computer, the Anglebird SSD2go Pocket also delivers very impressive levels of performance. If you need high performance in a mobile drive and can live within the 500GB capacity, this ’bird really can fly.

Excellent performance in a compact format, providing you can justify the price of entry.