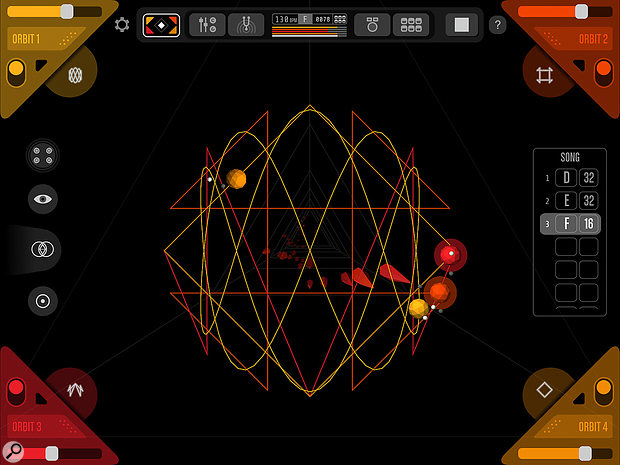 Note sequences can be generated by combining Tone Maps and Orbit patterns.

Let's not beat around the bush; Aphelian is fantastic. If you like making music on an iOS device and you're into electronic music, this is about as 'must buy' as it's likely to get. I'll get to what a 'Geometrical Sequencer' is in a minute, but first some background.

For those familiar with the iOS music app world, Aphelian comes from the creators behind the excellent, pioneering Oscilab, still hugely creative five years after first release, and sits somewhere between Figure or TriqTraq (conceptually more simple) and Korg's excellent Gadget (deep and very powerful) in the all-in-one EDM music production apps category. Indeed, given that Oscilab was last updated in 2017, Aphelian is perhaps best seen as its successor, although the original is still available in the App Store.

In terms of key features, what you get is four sequencer engines, each with its own fully-formed synth, a pattern-based drum machine, a compact mixing environment with a range of effects, the ability to construct multi-bar 'scenes' containing sounds/sequences for each of the five sound sources, scene sequencing to build a full song structure, real-time synth/sound modulation options, MIDI Out for each sound source (so you can drive external synths, rather than rely on the internal sounds, or record MIDI to a DAW/sequencer), plus support for IAA, Ableton Link and Audiobus. While all these connectivity options are great, if you want to keep everything in-house, the internal synths and drum machine come with a very good array of presets.

If you like making music on an iOS device and you're into electronic music, this is about as 'must buy' as it's likely to get.

The really wonderful bit, however, comes courtesy of that geometrical sequencer. This is a concept that's difficult to describe but incredibly easy to use and very creative. An X-Y grid with notes mapped across it is known as the Tone Map, and lots of different preset maps are provided. The user has the ability to define an 'orbit' for the 'planet' (note generator) across this map — again, lots of preset orbits are included — and influence that 'orbit' by choosing other orbits for two 'moons' that circulate the planet. You also get to define the positions along this orbit at which notes are generated, and the scale from which those notes can be drawn. Does this sound a bit bonkers? Well, maybe it does, but the result is an almost endless set of choices that can create really infectious note sequences. 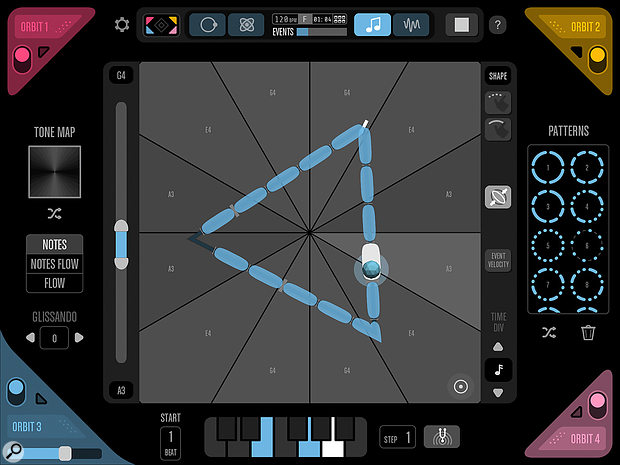 Aphelian's 'orbit' based sequencing in action.

Each of the four synths has an independent set of these orbit controls/configurations, and each scene can have different settings, use a different synth sound, and hold a different drum pattern. In addition, as well as being able to trigger scenes manually and in a song sequence, you get a live performance screen with four turntable-like controls which allow you to manipulate each of the synth sequences in real time. All these various tools can be accessed from the main menu strip along the top of the screen, and the central portion of the display tabs between different functions as required.

Mobile music-making may still be something of a niche activity, but iOS music app developers have created some genuinely unique tools that take full advantage of the options offered by a touchscreen. For me, that includes a few apps that are so good I could happily justify buying an iPad/iPhone just to use them. Apps like Patterning 2 and Troublemaker fit into that category and so did Oscilab. Aphelian is a shoo-in. It is both creative and inspiring and provides a genuinely different music-making experience. If pattern-based EDM is your thing, Aphelian is well worth exploring. It's easy to get started but has enough depth to keep you coming back. Musical magic in an app!