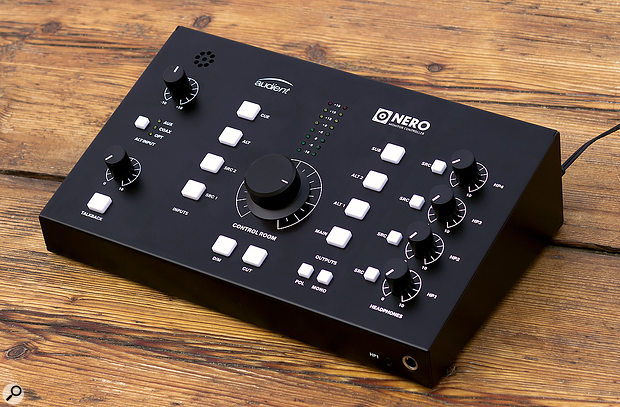 A console manufacturer should know a thing or two about how to make a good monitor controller...

Although most DAW software and audio interfaces incorporate some form of monitor controller functionality these days, I think there's something very comforting and convenient about a stand-alone analogue monitor controller within easy reach on the desktop! Not only is it guaranteed still to work if the computer has a meltdown, it also allows other replay sources easy access to the monitor speakers without having to fire up the computer.

Monitor controllers range from the ultra-simple low-cost models like the JBL NanoPatch+ or Palmer's Monicon, up to über-sophisticated devices like the Grace Design m905 or Cranesong Avocet IIA, and with countless alternatives in between those extremes. While some controllers are very simple passive designs, most employ active electronics — and, in general, I find the latter provide better consistency of performance in different installations, as well as far more functionality and versatility.

The dominant player in the mid-budget monitor controller market in recent times has probably been Drawmer, with an impressive range of affordable devices, all of which have well-judged feature sets including some facilities often omitted from competitors' products. However, the British console manufacturer Audient recently entered the same sector with its brand-new Nero monitor controller.

Audient's renowned experience in analogue console design and, more recently, with computer interfaces, provides the ideal background to produce a high-quality stand-alone monitor controller. Indeed, the company has made the ASP510 surround monitor controller for the professional market for a great many years, and the monitoring facilities built into its iD range of USB interfaces are also unusually well appointed.

Although the Nero is both intended and priced for typical home- and project-studio applications, designer Dave Dearden's pristine analogue circuitry means its technical performance is extremely good, and its configurability makes it a very competent and capable monitor controller that would be equally well suited to many professional installations, too.

Built into a compact, angled desktop unit, with a black-painted steel case and crisp white control legends, the Nero measures 255 x 75 x 155 mm (whd) and it weighs a solid 2kg — heavy enough to ensure the input and output cabling won't pull it off the desk!

From a technology point of view, the circuitry is fairly conventional for the most part, with lots of trusty NE5532 op-amps evident on the surface-mount circuit board, which covers the entire base of the unit. Most of the signal switching is performed by sealed relays (I counted 18 of them!), while Texas Instruments OPA1662 op-amps are employed as balanced line drivers for the speaker outputs, and the headphones are powered by Texas TPA6133A2 chips.

Unusually, rather than the traditional ganged potentiometer, the main speaker monitoring volume knob actually controls a stereo electronic stepped-attenuator chip, specifically chosen to ensure perfect channel matching at all level settings — so there can never be any wayward image shifts. On my bench tests (see below) I found the channel matching was within 0.1dB throughout the entire range, with completely inaudible 0.25dB steps, and a maximum attenuation of 105dB.

All of the clever configuration and operational functions built into the Nero are courtesy of a digital microcontroller (STM32), while the digital audio inputs are converted by an AKM AK4452 DAC. Again, my bench tests revealed that its AES17 dynamic range performance measured 112.2dB (A-wtd), putting it on a par with the Mytek Liberty DAC and the (discontinued) Grace m902.

The overall construction of the Nero is excellent, with all the rear-panel connectors being secured directly to the chassis metalwork. The only minor disappointment is the use of an external wall-wart power supply which connects with a non-latching coaxial plug, but it is a ground-free type so at least the monitor controller itself can't generate a ground loop. (See the box for all my bench test results.)

Nero's core monitoring functions comprise three balanced stereo inputs, all on quarter-inch TRS sockets (Src1, Src2, and Cue — the latter being intended for the artists' monitor mix feed), plus an 'Alternative' input with its own ±12dB trim control. This is not a single input, though, and the actual source can be selected from three further options: coax or optical S/PDIF digital inputs (supporting all standard sample rates up to 192kHz), or an unbalanced 'Auxiliary' source connected on either a 3.5mm or pair of RCA-phono sockets, with the former taking priority if both are connected simultaneously. Only one monitor input source can be selected at a time — there is no source mixing capability.

The signal amplitude of the selected monitoring source is shown on an eight-LED stereo bar-graph meter, with each LED lighting at precisely their marked levels between -18 and +18 dBu. The bar-graph LEDs are green below +9, and yellow above, with red for the top spot at +18dBu.

There are buttons to select summed-mono and left-channel polarity-reverse options — the combination of both providing the 'stereo difference' signal that I value very highly but which so many monitor controllers sadly omit.

A selected monitoring source can be routed to any of three separate sets of stereo loudspeakers (Main, Alt1, or Alt2), plus an additional mono output intended for a subwoofer, and the source and destination buttons are illuminated orange to indicate this monitor speaker source/destination routing mode.

Although there are no numerical marks around the volume knob, there are lines at the clock hour and half-hour positions. Placing the control at the nominal two-o'clock reference position provides a further 8dB of gain available at the maximum clockwise position. The Nero is a signal attenuator, with a minimum loss (with the volume control maxed out) of 6dB from balanced input to speaker output, so the maximum signal level available at the speaker outputs is +12dBu. With the volume control at the reference two-o'clock position there is an overall signal attenuation from balanced input to output of 14dB. This is a sensible gain structure for the vast majority of active speakers (and power amps).

As the subwoofer output is simply a summed-mono feed — there is no 'bass management' or low-pass filtering provided in the Nero — this output could be used for a dedicated full-range mono speaker, if required, although there are other means of achieving a mono output, too.

As you'd expect, all of the usual monitoring functions are provided. So alongside the large illuminated Cut (red) and Dim (green) buttons, there are also buttons to select summed-mono and left-channel polarity-reverse options — the combination of both providing the 'stereo difference' signal that I value very highly but which so many monitor controllers sadly omit. It's also nice to see the button labelled correctly as 'Pol(arity)' rather than 'phase'! To maintain headroom, the summed-mono button attenuates the output signal by 6dB.