In addition to these core monitor controller facilities, there are four separate headphone outputs, each with completely independent source selection and volume controls. HP1 is described as 'monitor grade' and outputs to the front of the unit for the engineer, on paralleled quarter-inch and 3.5mm sockets. The other three headphone outputs (HP2, HP3, HP4) are described as 'foldback grade' and presented on quarter-inch sockets on the rear panel for the artists.

Despite these 'monitor' and 'foldback' descriptions, all four headphone amplifiers are exactly the same, and these terms actually relate to their means of source selection. The artists phones on HP2, 3 and 4 use electronic switches for source selection, whereas HP1 uses relays, which Audient say provides a slightly cleaner and more transparent signal path, better suited to critical listening.

When selecting monitoring sources for any of the headphone outputs the source and destination buttons are illuminated in green (instead of orange), which helps to identify the unit's current operating mode.

For all headphone outputs, the minimum load impedance is specified as a very precise 12.8Ω, but since the lowest high-quality headphone impedance these days tends to be 32Ω, there's unlikely to be any problems in practice. The headphone amps seem to have plenty of volume available, although the actual level depends on the headphone impedance and sensitivity, obviously.

The Nero does have a built-in talkback mic on the top panel, but it also caters for an external one via the rear-panel XLR input and associated phantom power switch.

Finally, the Nero also has a talkback facility which appears on the headphone outputs. A mic is built into the unit, with a level control providing up to 44dB of gain. However, Audient have also provided an XLR input at the rear panel for an external mic, complete with switchable 48V phantom power — a very welcome feature. If you're going to have a remote mic it's also useful to have a remote footswitch to activate talkback, but the Nero omits that facility, sadly. The Dim function is activated automatically whenever talkback is engaged.

Usefully, the Talkback, Mono and Polarity buttons all work as either momentary or latching depending on how they're pressed. They latch on if pressed briefly, but have a momentary action if held, so deactivate immediately when released. This form of operation is employed quite widely these days, and is both intuitive and very effective.

The Nero is supplied with a simple single-page Quick-Start guide, but as the basic operation is entirely self-evident and straightforward this is more than sufficient to get users up and running very quickly. However, the Nero has quite a lot of hidden configurability and, while the Quick-Start hints at these options, it's well worth reading the full manual (a download from the Audient website) to appreciate the sophisticated options on offer.

For example, by default the HP1 headphone output always follows the monitor speaker's source selection, and it doesn't receive talkback. The other three headphones default to receiving the Cue input with talkback. However, these default settings can all be changed, if desired.

Likewise, although the factory default provides 15dB of attenuation when the Dim button is pressed, any desired amount between 15 and 30 dB can be dialled in simply by holding the Dim button until it flashes, and then adjusting the volume knob to the desired level. 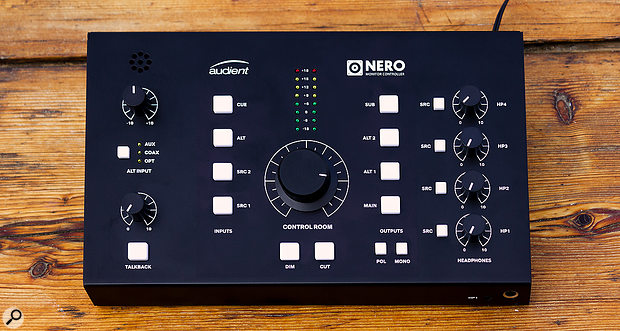 In a similar way, the two Alt speaker output levels can be trimmed individually over a ±15dB range relative to the Main output to enable level-matching between different speaker sets. Again, this is achieved by holding down the relevant output button until it flashes, then tweaking the Volume control.

Usefully, the subwoofer output can be linked to any of the main speaker selectors, so that it is activated automatically when a linked speaker destination is selected. The Sub button lights in this mode and can still be toggled off if required. Similarly, either of the Alt speaker outputs can be configured to provide a summed-mono signal automatically. I initially thought it odd that the mono button doesn't automatically illuminate in this condition but it is that way by design since, even if the control room is listening to a mono speaker, it may be required to listen in stereo on the engineer's headphones and then maybe mono that feed independently. In any case, the user will obviously know that the Alt2 selector (or whatever) is feeding a mono speaker anyway!

Lastly, another thoughtful provision allows the current source selection to be stored as the default power-up condition for the main monitor source. And if you lose track of all the customisations, a full factory reset can be recalled by holding down the Dim and Cut buttons for three seconds while powering up the unit.

Probably the closest alternatives are the Drawmer MC and CMC models, although none provide four independent headphone outputs.

Overall, the Nero performs very well and my test bench measurements confirmed Audient's published specifications. In line with most of Audient's products, the nominal signal levels conform to EBU standards, with a maximum level of +18dBu accepted at the balanced inputs, and a 0dBu input signal lights the zero mark on the bar-graph meters. The unbalanced inputs are specified with a nominal -10dBV input level and can handle up to +27dBu because of the presence of an input attenuator.

Common mode rejection for the balanced inputs measured around 60dB at 50Hz and 1kHz, and 53dB at 80kHz, which is excellent. Crosstalk at 10kHz measured between different inputs is around -99dB, which is extremely good, and between left-right channels of any particular input it measured -111dB. The signal-noise ratio measured 103dB (ref +4dBu), the output Cut attenuation achieved an excellent -102dB, and the THD+N figure was 0.0015 percent for a 0dBu input, rising to 0.008 percent at +18dBu.

The frequency response is ruler flat for analogue sources from 10Hz to over 80kHz, with a -3dB point at 4Hz. With a 192kHz digital input, the response measures -3dB at 4Hz and 70kHz, while a 96kHz sample rate gave a -3dB point around 45kHz. It appears that the D-A is configured with minimum-phase reconstruction filtering.

On the D-A side of things, the digital/analogue alignment provides +16dBu for a 0dBFS input, which is, technically, non-standard. However, in the context of a monitoring source this isn't a problem, and actually ensures there's sufficient headroom to cope with inter-sample peaks. On the review model, both digital inputs were absolute-polarity inverted, but I'm told this has been corrected on current production units.

This elegantly designed and well-engineered monitor controller offers some clever configurability and an excellent feature set, which includes the ability to listen to the stereo difference signal!