API invented the 500-series modular format and we check out their latest addition, the 535-LA line amplifier.

The 500-series modular format was invented by console manufacturers API, and the latest addition to the company’s own 500-series range is the API 535-LA line amplifier. Primarily a unit to attenuate or boost the gain of line-level signals, the 535-LA offers users a small slice of API’s revered console sound and is, they say, a much-requested addition to their range. What’s on offer here is essentially the part of their large-format consoles which deals with driving long, balanced, line-level signals, and is often referred to as the ‘booster’ card or section. Despite not being as eye-catching as some other 500-series releases, the 535-LA does offer a few features that might extend its use beyond that of an input/output utility device. I suspect, like me, many people will be interested to see if it can impart any useful character to our audio signals. 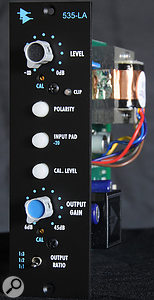 Looking at the controls from top to bottom, we have a level-trim knob, which govern’s the level at the unit’s balanced input. This works rather like a fader, with 0dB (unity gain) in the fully clockwise position and minus infinity when fully anticlockwise. Below this is a small clip LED, which is shared by the input and output amp stages: if either stage is being overdriven, the light is illuminated. Next up is a standard polarity invert switch, followed by an input pad offering a further 20dB of input attenuation. The next button activates a calibration setting, which bypasses the input and outputs controls. This can be adjusted via small calibration trimmers below the input and output gain knobs, and would be useful in establishing a unity gain reference, whilst also ensuring consistency if, say, using two units in stereo. Lastly are the output controls which offer a range from +6dB to +45dB.

In terms of internal circuitry, the 535-LA utilises the company’s discreet 2510 and 2520 op-amps, which, along with API’s propriety transformers, should ensure the unit imparts some API ‘flavour’.

The 535-LA could be useful in any situation where you might want to have additional control over your line-level signal: as an input level control for keyboards, for example, or for other hardware instruments, or running any line-level signals — including entire mixes — out to other outboard equipment or A-D converters. I experimented with running various signals from a mix I was working on through the 535-LA, and you have a great range of level controls that could indeed be useful in a number of scenarios. I’m a fan of the API ‘sound’ and the unit certainly imparts a very subtle but pleasing tone to your signal, particularly if you drive the output transformer a little. I especially noticed the sound when I ran transient-heavy material through the unit, and it added a small but noticeable amount of extra ‘body’ to a male vocal.

Many potential users will be interested in whether this device can be used to add real transformer saturation to a signal. Being honest, I don’t think that’s what it is intended to do: running the signal a bit hotter and straight back into my DAW, I had to use an external attenuation device after the 535 in order to really drive that output transformer. Of course, this might not be necessary if you were using the unit as a first port of call before going onto another outboard device. But in any case, I didn’t find the effect of really driving this device to be that pleasing!

So if the 535-LA is not a device for heavy coloration, what is it for? Really, it’s primary application is in any situation when your line-level signals might need some extra control; the unit is capable of either boosting or attenuating in a very controlled way and has some useful features. You should think about the 535-LA very much as a comprehensive, high-quality utility device, that will impart some subtle warmth and body along the way. If you have need of such a device and can justify the outlay, the 535-LA is well worth consideration.