Currently in the running for 2012's Dullest App Name award, Yamaha's 'Synth Arp & Drum Pad' consists of synths, arpeggiators and drum pads! Since it's also a bit of a mouthful, we'll opt for 'SADP' instead — even at the risk of a smirk or two. 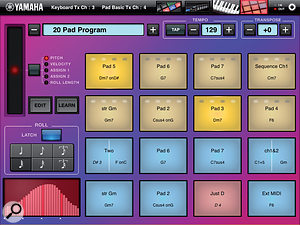 Synth Arp & Drum Pad's main interface is based on 16 MPC-style pads to which hits, chords or loops can be assigned. 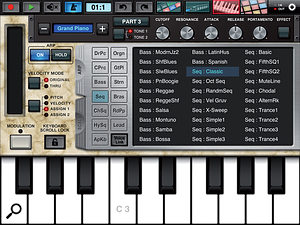 Synth Arp & Drum Pad's arpeggiator offers 342 different and well-labelled patterns,On the surface, this is yet another app aimed at simplifying the music-making process. But with 16 parts and a choice of 61 varied patches, including seven drum kits, pianos and guitars, it's no sonic slouch. Each part is tweakable, courtesy of a resonant filter and a basic envelope, and there are separate sends to three of the best effects I've encountered on an iPad. Surprisingly usable reverbs are augmented by a chorus/flanger, plus a variation effect with a generous list of choices such as delay, rotary speaker, distortion, and yet more reverb.

The 'Arp' component consists of 342 arpeggiator patterns, named according to their intended purpose. For example, 'Seq: Trance 1', 'DrPc: Funk' and 'Bass: Ibiza'. Activate 'Voice Link' and you're even saved the bother of choosing a suitable patch to arpeggiate. Equally effort-reducing is the scale function that reprograms the keyboard and eliminates any chance of wrong notes, even when played manually! Enabling 'touch control' causes parameters such as filter cutoff and resonance to become additional controls on the X/Y plane of the keyboard. Further nuances include velocity sensitivity, its five levels breathing life into synth parts and percussion alike. And if your fingers aren't busy enough, a ribbon controller stacks up yet more possibilities, all of which are recordable into your songs. There's storage capacity for five of those, each with a maximum of 32 measures.

There's a second and arguably more interesting side to SADP: Pad Programs. There are 64 of these to populate as you see fit, and each stores definitions for 16 MPC-style pads. A pad can trigger drum hits or chords of up to five notes and — even better — you can divide individual pads into two, putting different notes on each half. If you get bored of hits, any pad can be switched into sequence mode to play the stored notes as short looping sequences in a selection of musical intervals. You can graphically edit the note velocities and mute individual bars to create gaps, making this a tool with huge potential for musical interaction. There's still more, in the form of a roll function to repeat notes, with the ribbon on hand once again to dynamically vary the roll speed, bend the pitch, and so on

Synth Arp & Drum Pad is a far deeper app than it first appears to be. Even its MIDI I/O is superior to most, featuring not only MIDI clock sync and note transmission, but also a virtual MIDI port for triggering internal iPad synths (with mixed success, I found). It doesn't have everything, though. A mixer for its 16 parts would have been welcome, as would an export option for finished songs. Sometimes the keyboard responded sluggishly, too, and with no song editing provided, you'll be glad of the undo facility to quickly erase duff takes. Finally, as with Yamaha's TNRi app, battery power is gobbled up greedily, but I guess you don't get all those parts and effects for nothing. However, for the quality of its sounds, those versatile pads and attention to detail, SADP should spread some happiness, especially at the introductory price. Paul Nagle

DAW Remote HD is a particularly elegant iPad control surface that can connect with your computer via Wi-Fi or an iPad MIDI adaptor. It supports all the common DAWs with the Mackie Protocol, except Pro Tools, which it supports with HUI. It works smoothly, providing you follow the setup instructions, and it is easy to establish a connection and switch between computers via the Setting button at the top right of the screen. The screen Layout is customised for each of the DAWs supported: Pro Tools, Cubase, FL Studio, Live, Logic Pro, Digital Performer, Sonar and Studio One. You can also choose a Mackie Control Universal layout or a large generic Transport window. The latter allows more adventurous users to create their own custom control panels using a drag-and-drop system, so you could use this screen as a starting point and then add buttons of your choice. Note, however, that this does not work with Pro Tools. 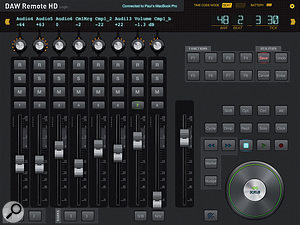 DAW Remote HD controlling Logic Pro. My first test was with Logic Pro, the layout for which is organised across three pages. The first two are set out more or less in the style of a Mackie Control, but showing fewer buttons at a time, so you can actually read them. You get the eight faders plus master panel on the left, a switchable jog/scrub wheel that works smoothly, zoom/track select buttons and transport section. Bank and Track buttons allow you to navigate to higher numbered channels. Plug-ins and EQ can be accessed via the rotary controls, Mackie-style, but, in reality, mouse control is generally easier for these.

Each channel has the expected Record, Solo and Mute buttons. Above the transport controls are sections for cycle/drop, mixer views, automation and rotary encoder functions, although when you switch to the second page, the buttons at the top of the section change to function keys and utilities. The third page is the one that really appeals to me, as it houses a large version of the transport section, with a master fader, a few buttons relating to cycle modes and markers, a big Save button with Undo alongside it, and Bank/Channel buttons. There are also eight record arm buttons that relate to the currently selected bank.

Switching to Cubase brings up a similar main page, but now the big transport controls are on the second page, with transport and large function buttons on the third page. Again, I found setting up no problem, and the same went for Studio One: set the DAW to look for a Mackie Control with Wi-Fi MIDI selected as its MIDI ports, and off you go. DAW Remote HD also works fine with Pro Tools operating as a HUI surface, but this time there's only one page containing the transport, faders and key control buttons.

Of all the control apps I've tried, this is my favourite so far. It works reliably, it gives you big transport controls when you want them, and the jog/shuttle wheel works perfectly, as do the zoom buttons. It's also insanely cheap for what it offers. Paul White

When it arrived on the market in 2004, the Jazzmutant Lemur (reviewed in Sound On Sound March 2007) was revolutionary: a multi-touch screen (over two years in advance of the iPhone) bundled with a software system that allowed users to construct or customise their own sophisticated control interfaces. Its only major down side was the hefty two-grand price tag. With the arrival of Apple's (much cheaper) iPad, the Lemur became an endangered species, and Jazzmutant ceased production of the hardware in 2010. 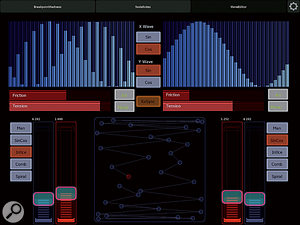 Lemur allows you to design some pretty sophisticated control set-ups.

Configuring controllers in the Lemur Editor software.While the iPhone and iPad have supported generic multi-touch control apps for a while (Hexler's TouchOSC and the open-source Mrmr being a couple of well-known examples), nothing has quite rivalled the sophistication of the Lemur, but now Liine, makers of the Griid control app for Ableton Live, have licensed the Lemur code from Jazzmutant and ported it to iOS devices, granting the platform a whole new lease of life.

Lemur is still relatively expensive: it costs £34.99$49.99 (TouchOSC is only £2.99$4.99), a pretty hefty sum for an iOS app, although a bargain compared to dedicated hardware controllers. So what does Lemur deliver that its rivals do not?

Firstly, Lemur supports a 'physics model' for its controls: its interface 'objects' can have mass, velocity and friction, allowing for smooth, damped control changes over time, or wild, continuous modulation as on-screen controls bounce back and forth. Secondly, Lemur supports a sophisticated scripting system: controls can modify other controls, allowing the app to do things autonomously: the bundled example templates include a game of Pong, and rudimentary sequencing systems are possible within Lemur itself. Thirdly, there are some esoteric but powerful interface objects such as MultiBall (a two-dimensional, multi-point pad with integral ADSR envelope support), RingArea (a snap‑to‑origin, trackball-like object) and Breakpoint, a multi-point ADSR editor. Lastly, the Lemur app supports legacy Lemur templates, so owners of the original hardware don't have to lose their investment of time and effort.

Lemur's on-screen controls transmit either OSC messages or MIDI. Core MIDI is supported, so a standard MIDI interface (connected via the Apple Camera Connection Kit) should work, as should an iOS device such as the iConnect MIDI. (Check Liine's online forum, though: some interfaces work better than others.) Otherwise, OSC or MIDI are transmitted over Wi-Fi, so you'll need to set up a network to whatever computer is running your audio software. For MIDI, the computer needs to run the free Lemur Daemon to convert between network messages and 'real' MIDI and route it to and from application(s). In fact, Lemur can transmit to several 'targets', so different on-screen objects could control different applications, or even software on multiple computers. The control system is bi-directional, so software can also update or modify a running Lemur template.

To create or alter a Lemur template, you need to run the free Lemur Editor, which lets you lay out controls graphically and edit their properties. The editor connects directly to an attached iOS device, allowing edits to take effect immediately. If you've used MaxMSP, or even some kind of MacDraw-like drawing application, you'll be able to find your way around, but the program is a bit weird, to say the least, with non-standard and slightly awkward menus and windows. While laying out templates is pretty easy, you'll need deeper technical knowledge if you want to get into the scripting side of things.

If you don't want to edit your own templates, the Liine web site offers a huge range of pre-built ones donated by Lemur users, mostly aimed at DAW control or instrument programming.

In use, Lemur looks good (it supports Retina displays) and responds well. My only minor niggle with the controls is that, for me, anyway, rotary knobs don't work well on a touchscreen.

Latency over Wi-Fi is acceptable but noticeable: you wouldn't want to use Lemur for a keyboard solo, but it's absolutely fine for controllers. (Liine recommend hardware MIDI for lowest latency.) Dedicated ad hoc networks are best for Wi-Fi; longer-distance wireless makes latency much worse, or even causes messages to be dropped.

For me, personally, a touchscreen will never completely replace a box of physical controls, but for power and versatility, Lemur is very hard to beat. Nick Rothwell