Making Music On The Move
By Hugh Robjohns & Paul Nagle

One of the more innovative products of recent years, Yamaha's Tenori-On was a hand-held sequencer with a built-in tone generator. Its magnesium body and matrix of white LED buttons made it instantly recognisable, but those futuristic good looks came with a hefty price tag, and even the less ambitious plastic version wasn't cheap. Neither is the app incarnation. 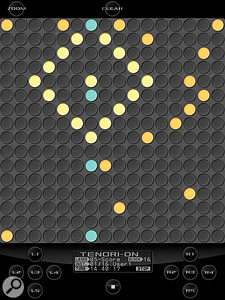 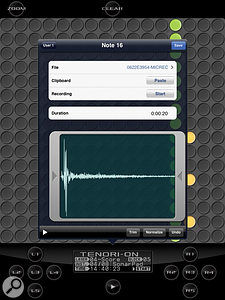 TNR-i allows you to sample via your iOS device's built-in microphone.Fully expecting cost to remain an issue, it took me just 10 minutes to forget all about it. The TNR-i faithfully reproduces practically every Tenori-On nuance, and in some cases beats the original for usability. With customisations of colour and animation possible, plus an easily-accessed menu system, I doubt you'll pine for the hardware version's tiny interface. Using Apple's VGA adaptor, you can even view the 16x16 matrix on an external monitor. True, an app can't hope to reproduce the tactile experience of LED buttons, the jog wheel and other switches, but it is nevertheless an excellent translation to the iOS platform. For a full appreciation of the Tenori‑On, check out my review from 2008 (/sos/feb08/articles/yamahatenorion.htm).

The functionality is all here, from the 16 layers of sequencers to the 32-voice polyphonic AWM2 sounds. As before, there are 253 presets plus three user voices. Each user voice comprises 16 samples of up to five seconds' duration, made either by pasting in audio from the clipboard or sampling via the internal microphone. I spent a happy hour or so recording Korg Monotrons, whistling, hitting stuff — all the usual tricks — before sequencing the results. With careful trimming and normalisation, those three voices can go a surprisingly long way.

If you checked out the earlier review, you'll know that the layers each trigger a synth sound, user voice or drum kit and incorporate novel techniques for creating looping tunes and rhythms. These include polyphonic step sequencing, random‑playback, virtual bouncing balls and more. All the layers together form a 'block', and there are 16 of these to populate. Song performance involves leaping from block to block, very much like Spiderman, and while this leaping isn't quite as fast and predictable as with the hardware's buttons and jog wheel, it's still pretty painless. You soon adapt to copying or clearing layers and blocks rapidly as you jam along. Each layer has its own speed, level, and so on, and there are scales to ensure that the notes on the grid fit pleasingly together.

You can record complete performances to share with other Tenori users or capture them as audio files, taking live input from the mic as you go! Interestingly, you are free to replay these audio recordings alongside the TNR-i's operation, which can lead to rarefied levels of bleeping chaos. For more regular interaction, TNR-i will synchronise with other WIST-enabled apps or — yippee! — MIDI clock. The layers transmit notes on separate MIDI channels meaning, with a little ingenuity, that they can drive external synths.

TNR-i is fantastic! It's massively diverting, like the original, and generates ideas you'd never have otherwise. This version has an online community and multi-player options, plus file-sharing via Soundcloud. Sure, as apps go, it's pricey, and judging by my iPad battery status, fairly power-hungry, but I wouldn't let either of those things deny me the pleasure of playing with it! Paul Nagle

The Audio Engineer app is available for the iPhone, iPod Touch and iPad (iOS 4.3 or later), and provides a combination of useful audio-based calculators and illustrated microphone techniques. Developed by Jonathan Papert (a musician and instrument builder of Sydney, Australia), the technical side was guided by James Englund (a music producer with a studio called Crash Symphony Productions), in consultation with and inspired by Michael Stavrou (the author of the bestselling audio engineering book Mixing With Your Mind). 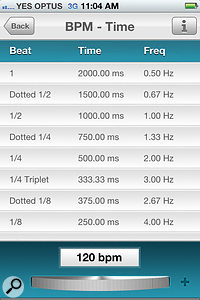 Audio Engineer's BPM/Time calculator. The Calculators section currently comprises seven modes, starting with a BPM Time Conversion calculator. A thumb-wheel graphic allows the tempo (in beats per minute) to be entered, while a table above instantly provides the corresponding time duration per musical bar, with all the usual divisions (half note, quarter note, quarter-note triplet, and so on), as well as the corresponding frequency rate. So, for example, a quarter note at 120bpm occurs every 500ms, and has a repetition rate of 2Hz. You could probably work that one out in your head, but could you do it for 136bpm? No, me neither, but the Audio Engineer app tells me the corresponding values are 441.18ms and 2.27Hz. This information is very handy for setting delays, compressor recovery times, effects modulation sweep rates and so on.

The next mode is Note Frequency conversion, which does what it says: you dial in a note on the thumb-wheel (in the range C0 to D10), and it tells you the equivalent frequency, as well as the acoustic wavelength of the note. This facility can be useful when working out the EQ centre frequency for removing or enhancing specific notes, or for identifying the resonant frequencies of an enclosed space.

The Sample Rate calculator works out the pitch and tempo change associated with a change of sample rate, so if you're going from 48kHz to 44.1kHz, for example, the tempo slows by 8.2bpm and the pitch falls by 1.46 semitones, which is important to know if you want to beat-match two CDs.

The Scale Frequency Chart is an expanded form of the Note Frequency conversion calculator, but focuses on providing the frequencies and wavelengths of all the notes employed in any specified key and scale type (major, melodic minor, harmonic minor and natural minor). Clearly, there is room to expand the scale-types listing here, but it's a useful feature nonetheless. The intention is to assist in identifying whether a particular EQ setting will cut or boost consonant or dissonant frequencies, based on the idea of 'harmonic mixing' from Stavrou's book.

The Distance/Time calculator provides a convenient way of finding out the propagation delay for sound over a set distance with a given air temperature. So it will take 1.43 seconds for sound to travel 500m in an ambient temperature of 28C, but 1.49s if the temperature falls to 5C. This is critical information for sync'ing those delay towers at a big outdoor gig, or for time-aligning close mics with a distant stereo array!

The Dynamics mode is intended to illustrate the concept of compression, and this is the only mode in which the graphics get in the way. There are three thumb-wheels for data entry, but the third one is lost off the bottom of the screen on an iPhone, because the 'transfer graph' is too large. The idea is that you set the ratio, and then as the input level and threshold are adjusted, the graph indicates the corresponding output level. It works well, and I can see myself using it as a training aid with students, but I think the display configuration could be improved.

The Room Modes calculator indicates the standing wave frequencies that form in an enclosed cuboid space. Thumb-wheels allow the width, length and height to be entered, and the results are displayed in either a graphical or tabulated form. The former makes it easy to see whether the modes are bunched up or well spaced, while the latter is better if you want to extract the data for further acoustical calculations of required absorption characteristics and so forth.

The other side of the Audio Engineer is the Reference Section, which provides illustrated guidance on microphone techniques. It starts off with some basic stereo arrays (A-B, Blumlein, M/S and X-Y), and this is useful as far as it goes, but is missing some critical detail and variations, and is plain wrong on a few occasions. There is no mention of ORTF or Jecklin Disc setups, for example, while the Blumlein description doesn't explain how the array should be aimed and contains some pretty blatant errors in explaining one application. The M/S description states that the Mid mic is an omni and fails to explain that other patterns can be used beneficially in some circumstances. It also fails to describe the correct orientation of the Sides mic, although it does give a good explanation of how to set up the appropriate decoding in a DAW. Similar simplifications and omissions apply to the X-Y technique descriptions too.

The Reference section continues with techniques, nicely illustrated with photographs, for miking acoustic guitars, guitar and bass amplifiers, drums and percussion, piano (bizarrely, only an M/S technique is described), harpsichord (with four radically different techniques), vocals (with some excellent old-school advice), saxophones, strings and, finally, mandolin and ukulele. The impression is that the information here comes from personal preferences and experience and it is far from comprehensive. Often, it's not particularly good at explaining what alternatives might be considered, or why one option might provide a better solution than another. It's a very good start, and the photographic illustrations of the described techniques are excellent, but again I feel a more rigorous approach would be beneficial if Audio Engineer is to serve as a truly useful reference tool for the student or inexperienced recording engineer.

Overall, then, the seven calculators are all well designed and provide a valuable and useful resource. The reference section is interesting, very well illustrated, and provides some useful advice, but it doesn't go anything like far enough in the variations and explanations offered, and in my more pedantic moments I'd debate the veracity and validity of some suggestions! Hugh Robjohns