Aphex's Exciter has been around in one guise or another for years, and when first launched, back in 1975, it was a truly revolutionary product that was only available to hire. Although the design has since been refined considerably (to learn more about the history of this device, check out Hugh Robjohns' review of the Aphex Model 204 in SOS February 2002: /sos/feb02/articles/aphexmodel.asp), it's the same basic process that lies at its heart: a duplicate signal is tapped off at the input, and this duplicate is then distorted to generate harmonics related to the input signal, before being filtered and blended back in with the input, with the user having control over the nature of the distortion and filtering, and over the wet/dry balance. The practical upshot is that the user is able to create harmonic interest in an otherwise flat-sounding signal, that they'd be unable to do with EQ (EQ can only boost what's there; the Exciter and other such enhancers add new frequency information). 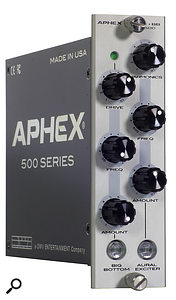 The latest incarnation of this classic design is the EX BB500, which crams the current Exciter circuitry — including that responsible for the famous 'big bottom' facility that was introduced in 1992's Type C Exciter — into API's increasingly popular 500-series format. 'Big Bottom' is the name Aphex gave to a second exciter that targeted the low frequencies in a signal.

The build quality of the EX BB500 seems decent, and there are some nice touches, such as the built-in screws (hands up if you've misplaced the screws when changing Lunchbox modules... yeah, I guessed as much!). As outboard processors go, this isn't exactly expensive — assuming you already own a 500-series rack — so I thought I'd line it up against a number of software audio enhancers to which I happened to have access and which aren't a million miles away in terms of price, to see what the hardware version, offered other than the obvious ability to keep a signal entirely in the analogue domain. I tested the EXBB on a range of sources alongside the following software: Waves' plug-in recreation of the original tube version of the Aphex Aural Exciter, Universal Audio's Precision Hz and Precision kHz, BBE's Harmonic Maximizer, and SPL's Vitalizer Mk II.

I've never used the original valve unit, but if Waves' model is anything to go by, the sound has changed considerably since those days — and to my ears for the better. On the mid-range/high frequencies, the hardware module was much smoother and more natural sounding; and of course the Big Bottom function doesn't appear on the Waves version, as it wasn't available on the original. The UA plug-ins are arguably the nearest thing to a model of the current Aphex circuitry, with the kHz variation emulating the basic Exciter and the Hz version the Big Bottom facility. The kHz gets pretty darned close, but I was unable to get anything like as good a result from the Precision Hz plug-in as I could from the hardware unit. The BBE Harmonic Maximizer — which I do tend to use quite a bit — came closest to giving me the same weight and smoothness at the bottom, though the SPL Vitalizer also did a sterling job. I have to say, though, that while relatively high-frequency enhancement — adding edge and snap to a snare or hi-hats, for example, or a little presence and definition to vocals in the midst of a busy chorus — worked well enough with most of the plug-ins, the Big Bottom feature was something I had to work much harder to emulate in software, no matter how good the tools. With the EX BB500 that just works — just as it does on previous Aphex designs.

So yes, I can still see a place for Aphex's now classic Exciter in hardware format in the studio. But while the 500-series form factor probably wouldn't be my first choice for live use (I'd want a stereo unit), these experiments did get me thinking how useful an Exciter could be in a venue or even bar/club installation, enabling you do add weight to the bottom end before filtering out the very low frequencies, to avoid stimulating room-resonance problems.

If you've not tried one of these processors yet — and I suspect there's a whole generation of young engineers that have never really felt the need to try an Exciter — I really do recommend that you give them a go, as they can be just what you need to add depth and sparkle to a flaccid recording. But do remember that you can have too much of a good thing, and that your ears quickly become accustomed to the added harmonics, because otherwise you'll find yourself well on the road to a brittle mix. Matt Houghton