Unhappy with what was commercially available, the Aphex boffins designed the Headpod for their own use - and they liked it so much they decided to release it. 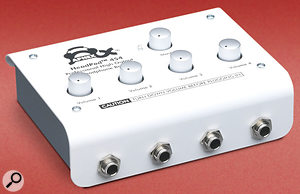 Headphone amplifiers: boring or what? Well, you'd better hope so, because if a headphone amp attracts your interest, it probably because it is doing something wrong. A good one, on the other hand, will soon be taken for granted and you'll forget all about it. There are dozens of headphone amps on the market (if you want an alternative to the model reviewed here you could try Samson's C Que 8, for example), but because headphones come in a wide range of impedances, driving them all at an adequate level with enough headroom to avoid clipping isn't as straightforward as you might think — which means that headphone amps don't all work as well as they should.

Aphex excel at bringing something new to the party, whether it is a mic preamp, an Aural Exciter or a headphone amp. The circuitry of the Headpod that's reviewed here was originally developed for internal use by Aphex because they weren't happy with what was on offer elsewhere —and, pleased with the result, they decided to turn it into a product. They're aiming the Headpod at a wide-ranging market, covering both pro and semi-pro users, and including computer-based recording, composing or editing, sound for picture work, location recording and broadcast.

This innocuous-looking headphone amplifier is ruggedly built from heavy steel and finished in an attractive white paint finish. It has four TRS stereo outputs, and two balanced TRS inputs that allow the unit to be fed from a mono or a stereo signal. There's also a separate TRS stereo input that can be fed from a headphone socket, with a slide switch to select between the two input types. All of the jack sockets are of the tough, metal variety, and the aforementioned circuitry, which is powered from an included mains adaptor, has been designed for very low distortion, a wide frequency response and bags of headroom.

Each of the inputs has a 20kΩ impedance if used balanced, or 10kΩ unbalanced. Input levels of up to +24dBu can be accommodated, where the frequency response is an impressive 10Hz-120kHz ±1dB. The signal-to-noise ratio is typically 100dB, with crosstalk below -80dB at 1kHz or -70db at 10kHz, and there's a typical THD-plus-noise figure of better than 0.001 percent when driving 100mW of power into 25Ω.

An overall level control acts on the input signal before it is split to the four independent stereo power amplifiers that feed the headphone outputs, so as to eliminate interaction. In total, there's a maximum available gain of 35dB — so it is advisable to turn the input right down when first powering up, to avoid a nasty (and very loud) surprise!

My first shock, on powering up this headphone amp, was the intensity of the white power LED — which is so bright that it prevents you from seeing the knob positions clearly if you're looking down on the unit... but on the plus side, at least you can use it as a surprisingly effective torch when working in the back of your rack (I'm not kidding!).

Physically there's little to criticise: the size makes it very convenient in most situations, and there's an optional mic-stand mount. Sonically, the Heapod is noticeably tighter and cleaner than my existing headphone amp, especially at high levels — and you can get a lot more volume than is good for you if you turn the wick up. I tried the Headpod with various headphone models, having a wide range of impedances, and it gave a good level for them all. The only thing I'd add is the ability to switch off one side of one output for singers who like to work with one phone off.

The Headpod is very quiet, and that being the case, I'm glad to say that (other than the integral searchlight) it is precisely as boring as I had hoped: it does exactly what it claims to do and it does it beautifully. In fact, I'm already taking it for granted!

This is a very good basic headphone amp, with four independent output channels, each with its own amplifier.