Notion music are known for their score editing software, and Progression Tab Editor is their first attempt at a touchscreen application, designed to let you edit guitar tablature and scores with relative ease. 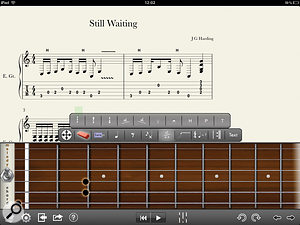 After only a few minutes with Progression, and with little experience of tablature, I'd already got some way through transcribing one of my own songs. The top-down fretboard view takes a while to get used to, though!On the title page you can make a new file, open a previous one, or download tabs from Guitar Pro Tabs or Ultimate Guitar. The software can open Notion, Guitar Pro and MusicXML files, so lots of the bases are covered.

Once you're in the score-editing screen, you'll notice a large fretboard at the bottom, which can be scrolled left or right to reveal all of the available notes. The fretboard is an easy way of entering notes, and can be switched between 'chords' and 'notes' mode. In notes mode, the transport will move along the score by the selected note length after each note is entered, while chord mode allows multiple notes to be entered before the user decides to move the transport.

The length of the note you enter is set using touch controls just above the fretboard. It includes every option you'll need for guitar playing, from standard note lengths to guitar-specific techniques.

Some parts of the editing Process are handled in quite an individual way: when deleting notes, you're given a circle with a cross in the middle (not unlike a gun sight), which you drag over the score element you wish to remove. You then tap to complete the deletion. It sounds odd, but it's actually very sensible in a cluttered environment such as a score, where you don't want to be accidentally removing things. The selection tool uses the standard iOS blue box with handles, and is activated by tapping 'select' in the tools section. Once you're done with your piece you can email the file itself, or a PDF of it, or simply save it to your iPad for future editing.

Both electric and acoustic guitar instruments are included with the app for playback, while a bass instrument can be downloaded for free. In-app purchases are also available for mandolin, banjo and classical guitar. Upon selecting an instrument to add to the score, you can choose to use either tab, traditional notation or both for that instrument, and can also change the tuning of each string. This is particularly useful, as many of us have one or two songs or compositions in different tunings.

Note entry does take a little getting used to, since unless you're a pedal steel guitar player you won't be used to looking directly down at a fretboard. You'll get used to it pretty quickly, though, and then things move rather swiftly.

You can, of course, play your score using the built-in instruments, although if you've downloaded tablature to the app from one of the popular tab web sites it may contain parts for which instruments are unavailable. It'd be nice if, in a future update, general MIDI sounds were available as a failsafe for such cases. I downloaded The Beatles 'A Day In The Life' and there was no way to play the orchestra with a simple string patch instead of a guitar.

Overall, Progression provides a reasonably efficient method of creating a tab score quickly and easily. The rather idiosyncratic note editing and entry method steepens the learning curve a little, but once you've grasped it, it's pretty easy for your average guitarist to start tabbing their pieces without too much musical knowledge. J G Harding 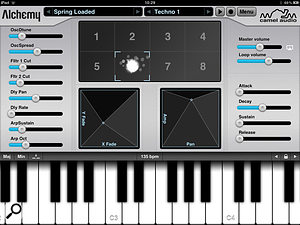 Alchemy Synth Mobile uses the iPad as a very efficient control surface, and can even be used as a controller for the synth's desktop version. 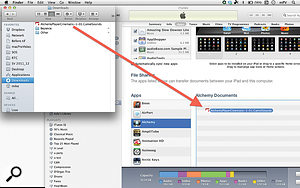 If you choose to upgrade to the Pro version of Alchemy, you can play desktop sound banks and patches with the iOS version by copying the files using iTunes, as shown here.amel Audio, originators of the CamelPhat and CamelSynth plug-ins, and developers of the truly awesome Camel Audio Alchemy synth plug-in for Mac and PC, have released Alchemy Synth Mobile for iOS devices. Before you switch off in anticipation of another 'synth for iOS' review, let me tell you that this one has enough features to warrant your attention, and maybe your cash.

First off, there's a free version, so you can try out the way Alchemy works on a touchscreen device without spending a penny. For free, you get 25 sounds and 25 loops. Each sound can be manipulated in real time by morphing between controllers using the X-Y pads, or choosing between the eight remix pads, which store a snapshot of all 16 performance control settings. In addition the free version also supports AudioCopy, so you can copy recordings made in Alchemy Mobile and paste them into your favourite iOS sequencer.

If you sign up for a Camel Audio account, you can download a further 25 sounds and loops for nothing. When you want to start spending money, six further sound libraries are available as in-app purchases at £2.99$4.99 a throw, and for that you get 50 sounds with 400 variations per library. I couldn't resist the DubStep library, which doesn't disappoint, but to get access to the much larger range of libraries available for Alchemy Desktop (which also have much more extensive and higher quality samples) you will need to buy the Pro version of the app.

The Pro upgrade costs £13.99$14.99. That's still relatively expensive in iOS app terms, but you gain a lot of functionality for your money. Firstly, for users who will only use the iOS app and not the desktop plug-in as well, you get 125 sounds and 50 loops, as well as the ability to layer synth parts by bouncing. You can export audio and MIDI files, save and load Projects, control Alchemy from other apps that support Virtual MIDI, and auto sync to external MIDI tempo. The keyboard also gains the ability to create pitch-bend by sliding your finger left and right. In fact it's 'touch sensitive' in both the free and Pro versions: just try tapping the key at different points along its length to hear how touch sensitivity is implemented.

The part where it gets exciting is if you use Alchemy Desktop too. The Pro version of the app allows you to use your iOS device as a remote control for the desktop version of Alchemy, whether that is the full, paid-for version of Alchemy or the free Alchemy Player.

I wasn't previously aware of Alchemy Player and the free 1GB sound library that comes with it, so the app is a great way for Camel Audio to publicise its availability. It turns out that controlling it with a touchscreen makes perfect sense, and it's well implemented. Connection between devices is handled by Bonjour networking, so it's very straightforward to set up.

Camel have made a great job of laying out the 16 performance controls, two X-Y pads and a keyboard, taking full advantage of the mobile version's potential for live performance. The layout is slick, as you can use multiple fingers to change more than one parameter at a time, unlike with mouse control!

Overall, Camel Audio should make quite an impact with this mobile app. They have obviously thought carefully about the opportunities offered by touchscreen devices and implemented them very effectively. The free version has enough functionality on its own to make it worth downloading, especially as it offers a tonic to all those synthesizer apps that don't make full use of the possibilities of a touchscreen device. Look out, though, as I guarantee that you'll be hooked in if you do download it. You'll soon want to upgrade to the Pro version of the app in order to use it as a remote control for the free Alchemy Player. It could get expensive if this leads you to purchase the full version of Alchemy for your Mac or PC, and subsequently buy more sounds, but you certainly won't regret it!

Martin Walker concluded his SOS April 2009 review of the desktop software by stating that "Alchemy is the easiest and most fun-to-use soft synth I've played for years, and the results are just so musical”, so I will add that the Alchemy Synth Mobile app is an excellent addition to the family. It adds creative opportunities that are well worth your time and money, and is a great synthesizer whether you intend to use it with the desktop version or not.Mike Watkinson