This 'two-in-one' kick-drum mic aims to offer all the benefits of multi-miking techniques, but without the risk of phase problems. 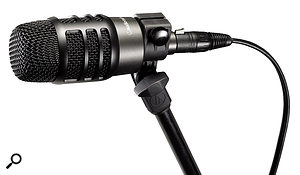 Getting a good kick-drum sound is often quite a challenge, and achieving the ideal balance between the attack of the beater and the ringing of the shell can be too much for one microphone. As a result, it is not unusual to see two different microphones being employed, typically a moving-coil mic to deliver a slightly dynamically compressed sound that accentuates the beater transient, and an electrostatic mic to capture the body resonances.

However, if these two microphones are not placed precisely, the small time-of-arrival differences of the wavefronts arriving at the two mics can cause unwanted coloration when their outputs are combined.

Audio-Technica came up with a very practical solution to the problem in the form of the AE2500 dual-element kick-drum microphone, which I reviewed in Sound On Sound in December 2003 (/sos/dec03/articles/atae2500.htm). This Artist Elite Series microphone incorporates separate dynamic and electret capsules, both carefully aligned within a shared microphone body to ensure phase coherence between the two individual outputs. I was so impressed with that mic's performance that I bought the review model and use it often.

The same basic design has now been made more affordable, in the form of the ATM250DE microphone, which is part of Audio-Technica's more cost-effective Artist Series. A word of warning, though: the ATM250DE should not be confused with the similarly named and styled ATM250 model in the same range. The latter is a single-capsule dynamic mic that is also intended for kick-drum applications (as well as other loud instruments). The two differ visually in that the DE version has a taller, more extended grille.

The ATM250DE is quite a solid little mic, weighing 320g and measuring 144 x 55mm. The black metal body is dwarfed by the large multi-layer black grille, but it is large enough to accommodate a pair of recessed slide switches on the rear, to provide an 80Hz high-pass filter and 10dB pre-attenuation for the electret capsule. 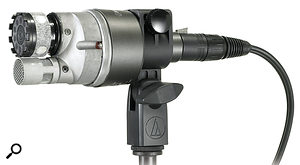 Here you can see the moving-coil capsule (top) and the electret capsule (bottom), arranged so that they pick up sound at the same time, thereby avoiding phase cancellations.

The ATM250DE represents a saving of about 40 percent compared with the price of the AE2500, and while the technical specifications are slightly inferior to those of the AE2500, there's not much in it. Getting picky, the electret capsule is about 2dB noisier, but the sensitivity is also a couple of decibels higher, which more or less cancels that out in typical applications! The actual sensitivities are 3.5mV/Pa for the electret and 2.2mV/Pa for the dynamic — meaning that the electret is about 4dB hotter than the dynamic in normal use, and 6dB quieter if the pad is switched in. The maximum sound pressure level that the electret can cope with is a very healthy 148dB SPL for one percent THD (158dB SPL if the pad is engaged), and the dynamic capsule will easily match that.

The polar responses of the two capsules are nominally cardioid for the electret and hypercardioid for the dynamic. The dynamic capsule's output certainly sounds rather tighter at the sides and rear compared to the electret's output. In terms of the frequency response, the dynamic element has been 'shaped' to suit kick drums, while the electret element is fairly neutral. Both elements show slight presence peaks around the 4kHz region, but whereas this amounts to about 5dB in the dynamic capsule, the electret's peak is a far more subtle 2dB. The bottom end of the dynamic also has a broad peak centred around 90Hz, with a 'hollowing' in the response between this and the upper peak, giving an overall 'smiley' shape to emphasise the thud and click of a typical kick drum. The electret capsule's LF response is slightly subdued below 200Hz, falling to about -5dB at 50Hz, although the slope can be increased dramatically to reduce unwanted subsonics, if required, with the built-in, switchable, 80Hz high-pass filter.

Naturally, the electret capsule requires phantom power and will accept anything from 11V to 52V on its own output cable (with a 3.5mA current demand). The microphone is supplied with a dedicated five-metre break-out cable, with a five-pin XLR at the microphone end, and two male three-pin XLRs presenting the individual outputs from the two elements (with clear 'Condenser' and 'Dynamic' labels). An isolating stand clamp is also supplied, complete with a 3/8-inch thread adaptor to suit European mic-stand threads.

While deriving two mic feeds from the kick drum might seem extravagant, the extra tonal flexibility often justifies the effort — and where it doesn't, it is quite permissible to connect only one output. The dynamic element's response is spectrally shaped, like most dedicated kick mics, to emphasise the thud and click of typical rock drum kits, while recessing the mid-range to leave space for other bass instruments, although the EQ curve isn't as heavy-handed as some designs. The electret output is noticeably more neutral, and suits jazz drum kits quite well.

However, the strength of this microphone is that you can easily blend the two capsule outputs to suit your own taste, without worrying about time-of-arrival cancellations. You can also process the two outputs separately, perhaps enhancing the smiley EQ on the dynamic and compressing the electret to bring out more shell resonances, for example. Recording the two microphone outputs separately provides greater flexibility during mixdown too.

Like its larger and more expensive AE2500 sibling, the ATM250DE is a more neutral and subtly tailored kick-drum mic than many, and that allows it to provide a far wider range of tonalities. So many dedicated kick-drum mics are 'one-trick ponies' that always produce the same sound regardless of the size or tuning of the actual kick drum. While that might be useful or convenient in some circumstances, I much prefer to capture what's actually there in the first place, and the ATM250DE allows that with considerable flexibility. Its inherent neutrality and very high SPL capability also makes this microphone ideally suited for use with other loud and dynamic sources, such as bass and electric guitar cabs, and brass instruments too.

Naturally, with two elements instead of one, the ATM250DE is more expensive than many single-element kick-drum microphones, but the price differential is offset by the extra versatility and convenience that this approach provides, and I think it is a trade-off worth making. If you are working with a wide variety of musical genres, the tonal flexibility and practical convenience afforded by the ATM250DE is very attractive and well worth considering.

The Audio-Technica AE2500 is the most obviously comparable dual-element microphone, but it costs substantially more.

A compact, dual-element kick-drum mic, providing the best attributes of both a moving-coil and a capacitor capsule with critically time-aligned diaphragms to avoid destructive interference. The output from each capsule is available separately, allowing them to be combined to suit the material and personal taste.