Fostex produce some popular location recording gear, including the recent DC R309 recorder, designed to sit under DSLR cameras, so perhaps it's no surprise that they've decided to release an interface for iPhone as well. Designed specifically for the iPhone 4, this model should work with the 4S as well, if you choose to upgrade. 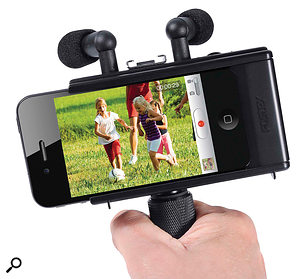 1: The AR4i can be used in either portrait or landscape orientation, allowing you to tailor the stereo field for various applications. 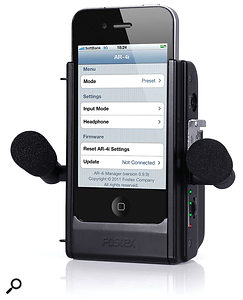 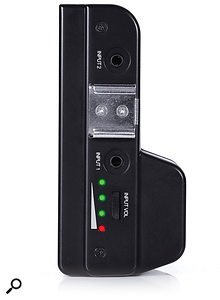 2: Four LEDs on the side of the AR4i provide convenient input level monitoring. This is especially good for checking signal from a distance, in a dark practice room or venue.It doesn't take more than a glance to see that the AR4i looks a little unusual, primarily due to its detachable mics, which can be mounted in various ways for different stereo fields and dual-mono configurations. Using input one and two for example, with the phone on its side (as in image 1), you could create a coincident stereo pair, or point the two mics in opposite directions for recording an interview. When using inputs one and three, as shown in picture 2 — with the AR4i upright and resembling some kind of robot boxer — the mics don't create a crossed stereo field, but instead can be rotated vertically, which might be useful for some very specific recording tasks.

The balanced mini-jack inputs allow connection of battery-powered condensers or dynamic mics using an XLR-to-3.5mm balanced jack cable, so with the right leads the AR4i can serve as a good recording interface for iPhones. The preamplification provided by the AR4i has a little more noise than I'm used to from typical interface preamps, but the unit is certainly a very compact and convenient way of getting two microphone signals into an iPhone.

The build quality of iOS-related products is often not quite what you'd expect, given their price tags, but the AR4i doesn't disappoint in this respect, combining a metal inner chassis with a plastic outer shell. The small headphone and input level thumbwheels are something of a necessary evil, given the compact size of the product. I have a bit of an issue with thumbwheels, since they can be easy to knock out of position, but I didn't find this a problem with the AR4i during my review time.

As with many such iPhone accessories, you'll have to remove your phone from any protective case you have before using the AR4i, but keeping your screen protector on should be OK. My protector was peeling off at the bottom, and the AR4i did peel it a little more, so be careful. The fit is snug, and though there's no click when the two devices meet, there's no real doubt about a connection being made either. The unit is designed so that the iPhone camera lens clears the top of the AR4i, allowing you to shoot video with improved sound and stability.

When it comes to keeping things steady, there are two tripod threads in the AR4i chassis, allowing you to hold the device in either horizontal or vertical positions using the knurled metal handle that's included in the package. There's also a hot-shoe mount on the top of the device for use when shooting video, which a llows you to attach a light or other accessory.

The included handle is a useful addition, and can help to reduce rolling-shutter effects and shaking when recording video, as well as handling noise when recording audio. I also found that, using the AR4i in landscape orientation, the bulge of the battery cover allows you to hold the iPhone in a similar manner to a compact camera. A sensibly designed carrying pouch is provided, which has a separate side compartment for carrying the included knurled handle, so that it won't scratch your precious new recorder.

Power is provided by two AAA cells, meaning that replacement batteries aren't hard to come by if you find you suddenly run out of power. You'll get about eight hours of recording out of your batteries, though higher levels of gain will reduce the running time. Sensibly, Fostex have included a mini-USB connector that functions as a DC power inlet. I do love the fact that USB is becoming popular as a power source, since USB adaptors are so easy to find.

The mics themselves sound pretty bright, and light on bass, which you'd expect from very small directional models. They each have a windjammer shield, which prevents light to moderate wind noise from being too much of a problem but won't cut out the wind noise from a gale. The recording quality itself is clean enough, though the noise floor of the recordings made in very quiet situations is noticeable compared to recordings made in louder environments.

The headphone amp seems relatively noisy, and more so when using sensitive IEMs. This noise modulates the audio signal somewhat, so I only really used the headphone amp for checking for practical errors and monitoring the microphone signal in real time.

Input level is indicated using four LEDs (three green and one red) next to the input level thumbwheel. Although most apps have input meters, there's something comforting about having physical metering to help you set the right amount of gain, and it's easy to see from across a room.

The AR4i is a useful piece of kit, and it works especially well for recording audio interviews, by allowing you to aim the two mics in opposite directions. The noise floor becomes less of an issue if you're recording music, and the fact that you can connect other microphones makes the AR4i very useful when combined with an app such as FiRe Studio. This is a handy little box! J G Harding

Mobile audio sequencers are still a relatively new thing, so there's still room in the game for pioneers and one-man bands. Blip Interactive consists of a single coder who produces Nanostudio, one of the most fun and comprehensive mobile sequencing packages around. 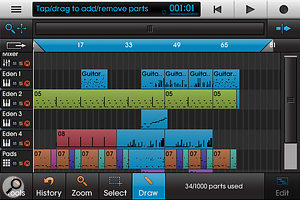 3: The main arrange screen of Nanostudio displays a lot of information in a tiny space, but doesn't feel at all cluttered. 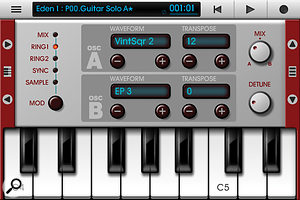 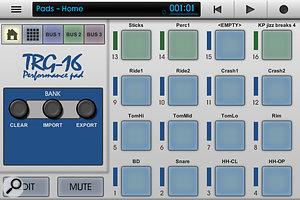 4: The Eden soft synth (top) is powerful and integrated with the sequencer, while TRG16 (bottom) allows the performance and sequencing of drum and sample parts.Unlike most apps on the App store, you can demo Nanostudio in full by downloading a free PC or Mac version from the Blip Interactive web site. This version is complete and is controlled intuitively with left and right clicks, in order to give you same functionality you have with a multi-touch screen. It runs in a small window, and project files load into both versions, so you can work on the mobile or on your computer

Nanostudio songs are made from multiple instances of two kinds of track: synth tracks using the versatile Eden synthesizer, and TRG16 drum-pad tracks, which can contain both drum samples and longer samples. All track types can be triggered by Core MIDI interfaces, and MIDI control can be configured quite precisely. Each track can also be sent to a mixer that allows inserts on every channel. Here you can choose from a compressor, three-band EQ, chorus, delay, flanger, waveshaper and reverb. You can also set up two send channels to route your instruments to.

The Eden synth itself is a full-featured dual-oscillator synth with 37 preset waveforms and the ability to play samples. There are four different ways of mixing the two oscillators together, and the synth includes a filter (with three modes, two slope types and an envelope), an LFO and a pair of X/Y controller pads. Eden is pretty comprehensive and powerful, capable of producing thundering bass and cutting highs. It also benefits from being part of a sequencing package rather than a stand-alone app, like most iOS synths. Although getting results out of Eden isn't as easy as using the sample-based instruments in FL Studio Mobile, for example, it's more satisfying and the results more original.

The TRG16's pads can be played live, as well as used for sequencing drum patterns. If you don't want to use one of the built-in drum kits, you can use the sample function of each pad to capture up to 95 seconds of audio using the microphone or a headset mic, or you can resample the main mix for a selected number of bars. Samples can be trimmed and normalised in the editor, as well as processed destructively using offline effects chains.

You can also send samples to Nanostudio over Wi-Fi, allowing you to create your own banks for sequencing on the go. Loopmasters have kindly donated some samples from their commercial packs too, which are pre-formatted for Nanostudio and can be found on the Blip Interactive web site.

The multi-touch control is great, and uses the screen real-estate very sensibly. Where items are too small to grab with two fingers, such as when extending note lengths in the piano-roll editor, another pair of controls appears away from the item in question, allowing you to alter the notes without obscuring the view.

I'd love to see a native iPad version of Nanostudio, as the current version is really only designed for iPhone and iPod Touch, and 'scaling' on the iPad is always rather fuzzy. Still, as it is, Nanostudio does a wonderful job of being a self-contained sequencer for a mobile device, and the fact that you can use custom samples opens up plenty of possibilities. If you're in the market for an iOS sequencer, give the excellent Nanaostudio a look. Since the versions for OS X and Windows are free, you've literally got nothing to lose. J G Harding