Making Music On The Move By Bill Lacey & Paul Nagle

MIDI Designer Pro is a unique app that allows its users to create custom MIDI control surfaces to interface with hardware and software synths and effects, as well as some DAW controls. Unlike dedicated programs that cater to specific applications, MIDI Designer Pro can be used to control almost anything you can think of that will react to a MIDI message of one kind or another. It can connect via Wi-Fi, CoreMIDI-compliant hardware such as the MIDI Mobilizer II and Alesis iO Dock, or via Virtual MIDI to supported apps on your iOS device. 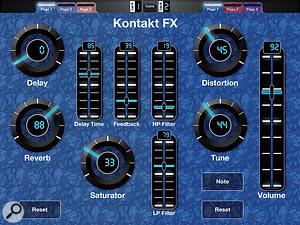 MIDI Designer Pro can send a variety of MIDI messages with minimal latency. These include Control Change (CC), Note On/Off, Pitch-bend, Aftertouch and SysEx. The app uses buttons, knobs, sliders, crossfaders, X-Y pads and accelerometer controls to send those messages. These controls can be added singly, or in groups of four and eight, and multiple banks and pages are available. Each can be resized, copied, dragged to any position on the screen, or can overlap another control. Buttons can be set to a momentary state or to toggle on and off. Designing your controller takes place within the app itself, and, as the web site proudly boasts, there's 'no scripting, ever', and overlay display makes it easy to see exactly what's happening. The option to save and share your creations rounds out the offering.

I do a lot of sound design in my post-production mixing, and use a Kontakt template with various whoosh, hits, foley, cymbal and percussion patches. I set up each of these to be controlled by MIDI Designer Pro, creating buttons and sliders to control tuning, distortion, volume, high- and low-pass filters, reverb and delay (with delay time and feedback controls). In MIDI Designer Pro, a button or slider is assigned to a MIDI CC number, along with a default value setting and the ability to define another control (typically a button) to be used to reset the control to its default position. In Kontakt, right-clicking on most controls prompts a 'Learn CC Automation' message. All that's then needed is to move the slider or button so the destination device can see which CC number to respond to. It takes very little time to set up these relationships. I have been using the control surface I designed daily in my mixing work, and it has brought a degree of spontaneity to sound-design work that previously required a lot more effort.

As a further test, I created a control surface for a Scarbee Rickenbacker Bass instrument, adding buttons to assign notes to particular strings, a slider to choose between neck and bridge pickups, and, finally, volume, tone and amplifier controls. I find that sample libraries that rely on keyswitches to change settings (such as articulations) are much easier to work with now that I can lay them out visually and name them appropriately, rather than having to remember which note and octave of the keyboard each is mapped to. MIDI Designer Pro takes working with these software instruments to an entirely new dimension, and makes them much easier to interact with.

As powerful as MIDI Designer Pro is, its success is dependent on the degree of MIDI control offered by the target device. While software instruments and effects offer flexible MIDI control, hardware devices are a little more challenging, and you'll often need to consult the documentation to see exactly what is controllable.

Ultimately, MIDI Designer Pro will only be as rewarding as your creative application of it and the degree of effort you're willing to put in. But that's not to say you need to be a programming geek to get a lot out of it. It has become an integral part of my setup, for mixing and sound design as well as for composition. Bill Lacey 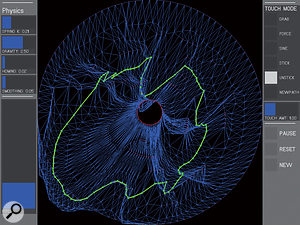 The Wablet's spring mesh comes alive, generating a scintillating, shimmering drone whose harmonic content shifts as the iPad is moved 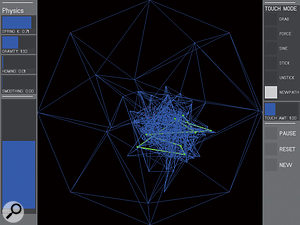 It's increasingly rare to discover musical apps that look or sound unique, but Rootnot's The Wablet easily ticks both those boxes. Its one-page interface opens onto a circular network of modelled springs ready to be plucked, stretched, wobbled and generally interfered with. I should say at the outset that this is not a regular musical instrument, at least at the moment. Instead, it's an elegant, interactive noise source that generates its complex tones by scanning a model of a physical vibrating system. Fortunately, you don't have to grasp any maths or physics to have fun poking at it and shaking it around!

Only a few controls are supplied, and these program the behaviour of the mesh of springs and determine how the system reacts to fingers, gravity, inertia and the position of the iPad. Increase gravity and you need a very steady hand to prevent the mesh falling drunkenly to the lowest point. If you increase springiness, the mesh bounces madly across the screen with more energy than a loved-up Slinky. The pitch of the resulting drone is set by the large blue pitch bar in the bottom left-hand corner. Smoothing and homing parameters can be used to gradually dampen the spring motion (and resulting harmonics) at any time.

The 'New' button selects meshes from half a dozen source shapes, each with characteristic tones and behaviour. One of the most dynamic and interesting of these has no visible springs; it's just a mad floating shape you can throw around the screen to generate sizzling, grungy, glitchy noises.

Due to its multi-touch nature, The Wablet can be grabbed in several places at once to create multiple vibrating or oscillating motions. Switch the touch mode to 'Force' and your fingers begin to act like repellent forces, casting the springs away as if by magnetism — or a force field. The 'Newpath' option is used to generate alternate scanning paths (shown as green lines on the blue mesh), and the more you draw in, the more buzzy harmonics are introduced. As I mentioned, you don't need to understand the physics, but if you are sufficiently interested, Rob Tubb's 'Scanned Synthesis' thesis, from which The Wablet is derived, is presented on his web site at www.rootnot.co.uk. There you can also obtain a Max For Live patch to send MIDI and other control info wirelessly to The Wablet. Core MIDI implementation is planned for the future, so it's possible that The Wablet will one day evolve into something more conventional and general-purpose, but for now it's a cheap and diverting source of drones, shimmering tones and rumbling metallic resonance. Even if strange noises aren't high on your agenda, I reckon it's worth the 69p99c for its realistic handling and good looks! Paul Nagle