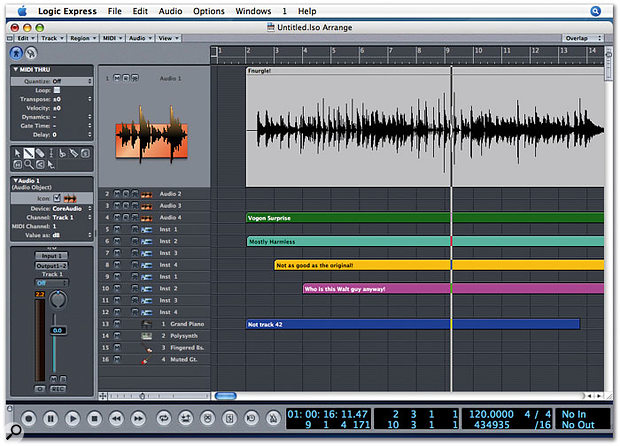 Buying the Express version of Apple's Logic will save you a cool £500 over the full-blown Pro edition — and you'll still get a mighty powerful sequencer...

Back in April 2005, Martin Walker wrote a very well reasoned article pointing out that many people don't really need the flagship versions of MIDI + Audio software packages. Most home-studio users could do pretty much everything they need using a 'light' version of their favoured program, saving themselves money and avoiding undue complexity at the same time. For that reason, I thought it was worth throwing the spotlight onto the light version of Apple's Logic, which offers particularly good value for money. 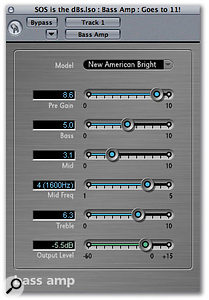 The light version of Logic Pro is, of course, Logic Express, and when you look at it a bit more closely, it isn't actually very light at all, despite being priced at under £200. Indeed, in many respects, Logic Express outperforms the original 'full fat' Logic 6 and includes many of the cutting-edge features of Logic Pro 7.1, as well as benefiting from recent additions to Garage Band. You get fewer bundled plug-ins than with Logic Pro and the software only offers around 10 times as many audio tracks than you're ever likely to need (255) rather than 30 times more than you'll ever need, but you can still run up to 64 software instrument tracks at a time, which is more than any current computer can reasonably support. As track count is largely a function of hardware and drive speed, the real-world maximum track count for Logic Express and Logic Pro is essentially the same. 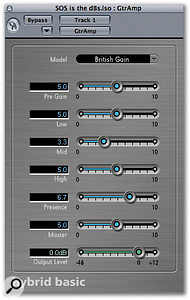 Apple have limited the I/O capability of Logic Express to 12 simultaneous inputs and outputs with a maximum sample rate of 96kHz, but again that's more than most project studio owners need. Similarly, the number of busses is restricted to eight, but these can be stereo, and as most people use them simply as effects returns, that shouldn't be too much of a limitation — I don't think I've ever used as many as eight yet. The surround option has also been dropped, as has distributed audio processing. Perhaps this last omission is a mistake, as keeping it in might just have enabled Apple to sell a few more computers to use as processing nodes, but I don't think many Express users will miss it. Audio files can be handled in WAV, SDII and AIFF formats, and MP3, AAC and Apple Lossless import and export is also supported, but more specialised formats, specifically AAF import/export, Broadcast Wave support and Final Cut Pro XML import/export, have been omitted. Quicktime movies can still be run in sync within Logic Express, though, so anyone wanting to experiment with sound for picture can do so very easily.

In order to keep the education market enthused, Apple have left in the whole of the very serious scoring section from Logic Pro. Garage Band songs can now be opened in Logic Express, and all the Apple Loop material developed for Garage Band works just fine in Express too. All the Logic Pro mix automation features are included, as is support for control surfaces, the only difference here being that Logic Express can only support one 'bank' of control surface — so, while you can use a Mackie Control plus expanders configured as a single control surface, you can't have one working as a mixer and another dedicated to controlling soft synths. With Logic Pro 7.1, full plug-in delay compensation was extended to the busses and outputs, so that's now been added to Express 7.1. This also works with third-party DSP-powered plug-ins such as those running on Universal Audio and TC Electronics cards.

As a Logic Pro user, I found Express instantly familiar and it's only after you've been working with it for a few minutes that you realise anything is different. The first thing I clocked was that the transport window didn't have all the layout and resize options offered by Pro and it couldn't be turned into a giant SMPTE display. In fact Express has no dealings with SMPTE at all, though it can sync to MTC and supports MIDI Machine Control. The second thing I noticed is that when I clicked to engage the channel EQ, it called up a more basic four-band equaliser with shelving high and low sections augmented by two swept mids. There's no spectrum analyser and no linear-phase EQ, either, but it's still a very good and flexible EQ section with a friendly graphical interface. One other difference is actually an improvement: in Logic Express, the track icon menu still appears as a matrix so you can see all the options at once. Logic Pro, by comparison, has switched to a seemingly endless list that is frustrating in the extreme to use. 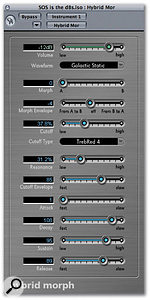 Although Logic Express lacks many of the 'big gun' plug-ins featured in Logic Pro, you can do a lot with the equivalents borrowed from Garage Band. These include guitar and bass amp modellers and the new Hybrid synths.

Another omission I found after wandering around the Environment is that there are no dedicated live input tracks for external synths as there are in Pro, and I could find no way to route external signals into the Aux channels. If you want to feed a live instrument into Logic Express, you need to route it via a track input set to 'record ready' mode.

The familiar Matrix, Arrange, Track Mixer and Environment pages are there along with Score, Event List, Transform and Hyper Edit. There's no Project Manager, but you can still save songs as Projects to keep everything in one folder, which is a great improvement to Logic 's workflow in my view. The most obvious missing items are the 'big gun' plug-ins that come with Logic Pro 7.1: the guitar and bass amps, Match EQ, Sculpture, Ultrabeat, EVB3, EVP88 and of course Space Designer and Pitch Correction, but you still get all those cute 'crop circle' analogue and FM synths, the ES1 monosynth and the EXS24P MkII sample player with a very decent sample library thrown in to boot. New samples can be added if they're in EXS24 format, but you can't create your own samples or import other sampler formats with this version.

On top of that there's the full set of Garage Band instruments, and if you haven't tried these yet, I think you'll be surprised at how good they are. Though simple on the outside, they use the engines of the Logic Pro plug-ins, and the tonewheel organ sounds every bit as good as its big brother while being a lot easier to use. Digital Stepper is also very versatile and the analogue synth models are as warm and fat as they should be. The Garage Band instrument set includes a sampled piano plus some perfectly acceptable drum kit sounds, and with v7.1, these are joined by two new Hybrid Synth plug-ins. In all there are now almost 40 effects plug-ins, with reverbs going all the way up to Platinumverb (the top of the tree before Space Designer came along) and nearly 20 software instruments. Guitar and bass players will also find modelling guitar and bass amps in there, and though they aren't as fancy as ones in Logic Pro 7.1, they work well and are easy to use. To complete the package you also get a vast library of Apple Loops (over 1000) so there's really nothing else you need to get started making some very high-quality music other than an audio interface and a MIDI keyboard. 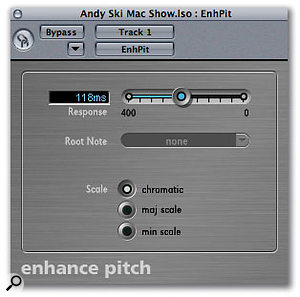 With the update to 7.1, there are further useful additions. Since pitch and time correction were introduced to Garage Band, Logic has been updated to maintain compatibility, so although there's less functionality than with Logic Pro 's Pitch Correction, you can still choose a musical scale, then correct your vocals to it using just a single slider. This is a great bonus and almost worth the cost of the entire Logic Express package if you're not a great singer. Similarly, audio timing can be improved using a single correction fader, though the quality of the results depends on the type of input source being 'quantised'. In a similar area, there's now a 'Follow Tempo for Recorded Audio' option that applies time and pitch-shift to the file when you change the song's tempo or key. Again the results depend on the type of audio and how far you try to move it from its original pitch or tempo, but used over a sensible range, the results are impressive.

Ease of use has also been improved, so as well as the original 'Wizard'-style function to help you set up new songs, there's now plug and play for audio interfaces. As soon as you connect and switch on an external audio interface while Logic Express 7.1 is running, a dialogue box appears and asks if you'd like to use the new device.

Another feature Logic users have been asking for for a long time is the ability to drag or copy plug-ins without having to visit the Audio Configurations window. Now you can do it in the Track Mixer or Arrange windows using a hand tool. Very welcome! The key command set has been increased, the Automation Curve Tool from Pro has put in an appearance and there's now dedicated support for the Korg Kontrol 49 and Micro Kontrol, the Frontier Design Group's seriously wonderful wireless Tranzport, Tascam US2400 and FW1082 controller/interfaces plus the JL Cooper CS32 and Fadermaster 4/100. 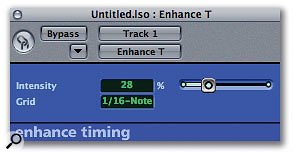 Pitch and timing correction are available in Logic Express, again thanks to Garage Band-style single-slider interfaces.

The plug-ins that Apple have tended to omit from Logic Express are, in the main, also the ones that take a lot of processing power, so if you're not using a G5 machine, Logic Express might be a good choice, especially if you don't need some of the more esoteric functions of Logic Pro or the ability to sync directly to SMPTE. The Track Freeze feature means that even older machines can be used successfully, as processor-intensive audio or instrument tracks can be temporarily frozen to conserve CPU overhead at the expense of only a little more hard drive activity. In many cases, what's been lost from the Pro portfolio has been replaced by the back door courtesy of Garage Band, so all the essentials are covered. Another good point is that Logic Express doesn't use a hardware dongle, which is a great benefit if you're using a laptop on the move. I won't go into how well the new v7.1 features work as that is covered in our overview of Logic Pro 7.1 in Logic Notes, but in the short time I've had the upgrade, I haven't found anything I don't like.

If there's a criticism, it is at the philosophical level, insomuch as Logic Express actually gives you too much, so beginners probably won't find it much easier to learn than Logic Pro — even the notorious (but simple once you get to know it) Environment window is there in all its glory. However, the up side to this is that when you eventually feel the need to move from Logic Express to Logic Pro, the learning curve is almost non-existent, and of course there's always the option of starting out with Garage Band and then working up to Logic Express when you're ready. Given its low price, great functionality and generous library of plug-ins, samples and loops, Logic Express is a fabulous bargain and, teamed with a Mac Mini, could form the basis of a very serious music studio at a seriously attractive price. In essence, you're paying less than a third of the price of Logic Pro and getting over 90 percent of the functionality.

If you feel Garage Band is too basic for you but you can't justify buying Logic Pro, Logic Express will get you most of the way there for surprisingly little money.