After decades of development, there are now countless digital audio formats — can this black box allow them all to talk to one other?

There's an old pro‑audio saying along the lines of, "We like standards; that's why we have so many of them!" and it's certainly true of digital audio connection formats. 'Universal format converters' have been around since there were more than two incompatible digital interfaces, but one of the most versatile, especially for live-sound installations, is the MVR‑64 Multiverter, made by Swiss manufacturers AppSys ProAudio. Introduced in 2016, it recently received a significant functional upgrade with the new v3.0 firmware.

This 1U rackmount box can handle 64 channels of audio in both directions at base sample rates, with support for double and quad rates too (transcoding 32 or 16 channels, respectively). The physical digital audio interfaces built into the hardware comprise ADAT, MADI, AES50 and Dante, and these are supported with word clock in and out (a 75Ω input termination can be enabled via an internal link), as well as USB, MIDI (also MIDI-over-MADI), and RS485 for (future) remote-control options. With the latest Firmware (3.3-beta5), the optical ADAT ports can be configured instead for stereo S/PDIF but, more importantly, an extension port is intended to allow connection of a variety of promised external interface boxes for lots of additional format-conversion options.

Naturally, any input format can be routed to any output format with just a two-sample latency, and full 64-channel input and output asynchronous sample-rate conversion (ASRC) is available as an option. This additional card was installed in the review unit, carrying an impressive collection of seven Analog Devices ADAU1445 programmable DSP chips to perform the ASRC functions. Sample-rate conversion can be allocated as desired between any physical input and the routing matrix, and between the matrix and any physical output.

Though what I've written thus far is an accurate overview of the Multiverter's core facilities, it belies the true flexibility of this product, particularly in respect of the MADI interfacing. For starters, MADI can be connected either via the familiar optical dual-SC format, or through the original standard AES10 BNC coaxial connectors. But it can also be hooked up through an RJ45 Ethernet connector, using the latest MADI-TP format (see 'MADI-TP' box later). The adjacent AES50 port, which is compatible with the Behringer/Midas stage box implementation (and, although not yet enabled in firmware, it is planned to also pass control data for their remote stage box preamps, etc.), is co-located for a reason too. Since the AES50 protocol is, at its core, basically another 'layer 1' (48-channel) MADI-over-Ethernet system, the Multiverter can be reconfigured to allow the MADI-TP and AES50 Ethernet sockets to both serve either as dual-AES 50 or dual-MADI-TP, where extras channels are required beyond the standard single port's provision. 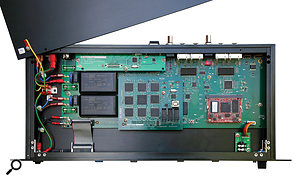 The review unit featured the optional 64-channel asynchronous sample-rate conversion board, seen here in the middle, with seven Analog Devices ICs.For the Dante interfacing, the usual Brooklyn II module is employed, with Primary and Secondary RJ45 Ethernet ports. These can also support the AES67 Audio-over-IP format, if required. The default arrangement configures the two ports for serial daisy-chaining of Dante equipment, but they can be re-arranged using the Dante Controller, to operate as a parallel-connected dual redundant network. The extension port is interesting in that it uses the physical HDMI connector — although it is not compatible with standard HDMI equipment. This can be used to link two Multiverters to provide a 128-channel router, or to connect a variety of planned external interfaces, which will be released during this year. These include a 1U rackmounting unit with 64x64 channels of AES3, a half-width rackmount 64-channel AVB interface, and a unit to provide native Waves SoundGrid connectivity.

As befits a professional, mission-critical product, the Multiverter MVR‑64 is equipped as standard with dual universal (90-240 V AC) IEC inlets for redundant mains powering, as well as a four-pin XLR for 9-24 V DC powering.

I mentioned the remote options above, but at the time of writing this is something of a work-in-progress. The Type-B (square) USB port cannot carry audio, and is currently only used for firmware updates. However, it is planned to cater for remote-control operation in the future. Similarly, the pair of five-pin DINs which carry MIDI in and out will also be usable for remote control purposes when enabled in a future firmware upgrade. The RS485 nine-pin D-sub connector is compatible with the Yamaha HeadAmp remote-control protocol. However, while all these potential remote control options are yet to be enabled, the Multiverter can now be controlled using a web-browser via the Ethernet (Dante) connection — of which more in a moment.

A glance at the rear panel is enough to see just how many different formats are catered for!

The Multiverter's front panel looks complicated, but is actually logical and straightforward. The Power on-off switch is at the left, with LEDs indicating the current power source (AC1, AC2, or DC), the most appropriate being selected automatically. Over at the right-hand side is a rotary encoder knob with a push action to activate a selected function, and a second button alongside which provides a 'back' or 'return' function.

The first control panel section recalls and stores the 12 user-preset routing configurations, and is provided with Recall and Store buttons along with an array of LEDs. Loading a preset simply involves pressing the Recall button, scrolling through the LEDs with the encoder knob to select the appropriate memory, and then pressing the encoder to load it. Two additional LEDs in the array indicate the Test-tone and Function modes. A test-tone is enabled in the same way as recalling a preset and, when active, generates a -20dBFS 1kHz tone which is dispatched from all of the currently active outputs (this mode is also indicated by the routing matrix LEDs turning yellow). The function mode is also accessed in the same way, and allows selection of a number of different system configuration options, including headphone gain, MADI channel modes, and word-clock rate options.

I/O routing is controlled by the next panel section which has a single button and a 7x7 grid of LEDs with the inputs on the rows and the outputs on the columns. The Set button assigns the encoder knob to change routing selections: rotating the knob scrolls along each row in turn, and pressing the encoder selects that crosspoint. Inputs are mapped directly to outputs in blocks of 64 channels (or however many channels are active in the selected source). Red LEDs indicate a routing connection is available but inactive (due to a missing source or clock signal). The LEDs turn green when a valid connection is active, and yellow if the test tone is replacing the audio sources.

Next up is the Clock section, again with a single Set button and 21 LEDs. The procedure is the same; press the Set button to assign the encoder and rotate to select the desired clock source, sample rate, S/MUX mode and sample–rate conversion (if installed). Any valid input source can be selected as the clock source, or the Multiverter can act as a clock master with sample rates from 32 to 192 kHz (although not all interfaces support the 32/64/128 kHz modes).

And finally, the last panel section is the headphone monitor, with a Set button and array of seven LEDs to select the input source. A quarter-inch headphone socket sits below a numerical display which shows either the volume setting or the selected source channel. The headphones can be configured for mono or stereo operation, selecting individual or pairs of channels respectively. A simple 'panel lock' mode is available to avoid accidental operation by holding the 'back' button while simultaneously pressing the encoder. It is released in the same way.

As I mentioned above, remote control is currently only possible via web and telnet connections, the former via the Ethernet/Dante to access a built-in web server from a standard web browser. Using this app, signal routing is delightfully straightforward and is based on the same kind of 'matrix' input/output grid arrangement as the front panel. However, not only can sources can be routed as complete blocks of (up to) 64 channels, it is possible to 'drill down' to access channels in smaller groups of eight channels, or even as individual channels. Obviously, only 64 sources can be routed through the Multiverter at any one time, but the routing flexibility here is impressive, with the added bonus that inputs can be routed to multiple output destinations simultaneously, if required. For programmers who prefer textual rather than graphical routing, an alternative 'List' view is also available.

Although the Multiverter MVR‑64 is still a work in progress as far as the firmware is concerned, and the additional interface option expansion boxes won't appear until later in the year, this is already a very powerful and effective router/format converter that is very well built, easy to use, and extraordinarily versatile. Products like this are not the most sexy or inspiring, but they serve a vital function in complex digital systems. The Multiverter MVR‑64 appears to have been designed to provide elegant connectivity solutions within live-sound installations as its primary market, but it will also prove itself valuable in other large multi-channel installations — particularly education, broadcast, studio and theatre — where a multiplicity of digital formats are present.

The Ferrofish Verto and RME Madi Router spring to mind as offering some of the MADI and ADAT conversion interfacing, but neither have the full complement of formats of the Multiverter, let alone the SRC option.

MADI-TP is an interface scheme that transmits both the input and output signals of a bidirectional MADI connection via two twisted pairs in a standard Ethernet cable, instead of via two coaxial cables or dual optical fibres. This is a 'layer 1' system so, although it uses standard physical Ethernet cables with RJ45 connectors, it is not LAN-router compatible and can't share a network with other data traffic. MADI-TP is an increasingly common fixture on large digital live-sound consoles as it is cheaper and more convenient that optical MADI connections, although currently different manufacturers seem to employ different wiring arrangements, and some send power over the spare pairs in the cable. Appsys offer an inline adapter box that reconfigures the MADI-TP port wiring to be compatible with Digico, Soundcraft and Studer MADI-TP systems.

This latest iteration of the Multiverter is a well-designed and very capable multi–channel digital format converter and signal router with ADAT, MADI, AES50 and Dante connectivity. A full I/O sample-rate converter option is also available if source-synchronisation is impossible or undesirable.