Making Music On The Move By Mark Wherry

The iPad has been a runaway success since its release in 2010, and arguably remains the most popular tablet amongst musicians and audio engineers thanks to the large number of related apps available on the App Store. It has also experienced perhaps the least consistent naming scheme of Apple's recent product lines. The original iPad was followed, sensibly enough, by the iPad 2; but Apple then reverted back to simply 'iPad' for the third- and fourth-generation models, referring to them each as "the new iPad”. Now, for the latest revision of the 9.7-inch iPad, Apple have baptised this fifth-generation model with the Air moniker first used by the MacBook range of portables in 2008.

As with the MacBook Air, the 'Air' designation aims to infer that this new iPad is thinner and lighter than its predecessors, and this is indeed the case. The iPad Air has a depth of just 7.5mm, compared to the 9mm fourth-generation model, and it weighs in at just 469g, compared to 650g. Long-term iPad users may remember that the iPad 2 was in fact also thinner and lighter than the third- and fourth-generation models, but the iPad Air has that beat as well. The still-on-sale iPad 2 is 8.8mm deep and weighs 601g. 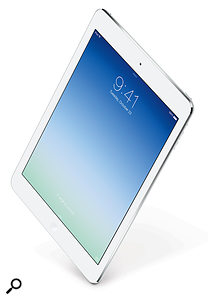 The iPad Air in all its glory. And while you might be wondering (especially when you get down to the level of comparing tenths of a millimetre and a few hundred grams) whether this makes much of a difference in practice, let me tell you, it does. The minute you take an iPad Air out of the box, the physical difference is obvious — and very welcome.

The iPad Air no doubt benefits from the work Apple did in designing the iPad Mini, and, in fact, the iPad Air essentially looks like a big Mini, which is no bad thing. There's the smaller frame — which helps to reduce the overall size of the device — the sturdy metal side controls, and the diamond-cut chamfer. The only thing to be aware of is that this change in design may cause the Air to be a poor fit with certain accessories designed for previous iPads.

The iPad Air runs iOS 7 and, although I'm still unconvinced by some aspects of the redesign, using this latest version of iOS on an iPad Air feels far more fluid and responsive when compared with older devices; specifically the second- and third-generation iPads. Beyond the design of iOS 7, it's worth pointing out that some music and audio apps have experienced compatibility issues with Apple's latest mobile OS. And while many of these problems have already been fixed (especially in the latest iOS 7 point releases), some issues may never be solved by intent. For example, Jack, an app that allows audio and MIDI routing between other apps, did so by utilising features Apple no longer allow developers to use. So if you have a collection of apps you use on a regular basis, it would be well worth checking these apps are compatible with iOS 7 before purchasing an iPad Air.

Powering the iPad Air is Apple's latest A7 SoC (system-on-chip), which was first seen in the recently introduced iPhone 5S; and, without wishing to sound too ebullient, this chip is going to be really significant for anyone running demanding apps on an iPad — especially music and audio apps.

The biggest change in the A7's design is that it uses a 64-bit architecture, which is an interesting move for a mobile device. With traditional computer platforms, one of the main advantages of a 64-bit architecture was the ability for applications to be able to access more than 4GB of memory. But with a device like the iPad Air, which offers only 1GB of memory, the benefits are initially a little less clear. 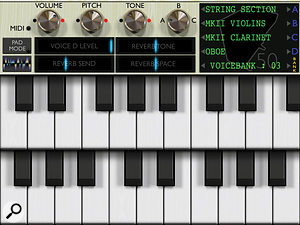 In terms of benchmarking, Geekbench 3 gave my iPad Air a score of 2694, making it nearly twice as fast as a fourth-generation iPad (which scored 1400), and five and a half times faster than the third generation (493). To give the iPad Air's result even more perspective, Geekbench 3's scores are apparently calibrated against a baseline score of 2500, which is the score of an Intel Core i5-2520M processor clocked at 2.5GHz. This means an iPad Air is roughly as powerful as an early 2008 MacBook Pro, which scored 2703 — at least in theory. The big caveat, as with the move from the A5X to the A6X, is that software has to be developed and compiled using Apple's latest tools for existing apps to fully benefit from the new architecture.

To lend some kind of real-world perspective, I turned to WaveMachine Lab's Auria, which is currently not optimised for the A7 chip. Playing the default 'The Approach' demo song, Auria reported a maximum CPU usage of 26 percent, compared to 55 percent on a third-generation iPad (which was also running iOS 7). That's not a bad improvement (though there would obviously be less difference between the fourth-generation iPad); but once developers start taking advantage of the 64-bit instruction set in the A7 chip, the improvement will likely be even more significant.

The only slight disappointment with the iPad Air's new internals is that Apple chose to stick with 1GB of memory as with the previous generation. For those streaming audio from multiple apps simultaneously, more would, of course, have been welcome, especially considering tablets like Google's Nexus 10 and Microsoft's Surface 2 that do come with 2GB.

If you're considering making an iPad Air your first iPad, aside from some initial iOS 7 compatibility issues with music and audio apps, I wouldn't hesitate to recommend it: the iPad Air is, without doubt, the best iPad Apple have ever made in every possible way. If you're the owner of a first-, second-, or third-generation iPad, the iPad Air is definitely a worthy upgrade; it's faster, slimmer, lighter, and capable of running the latest iOS and apps without breaking a sweat. Fourth-generation iPad owners, on the other hand, may want to wait a year for the next revision, unless you find yourself hitting a wall when running apps that suck more cycles from your CPU than a Dyson in a bikeshed.

Finally, on the question of iPad Air versus the new iPad Mini with Retina Display, I would probably come down on the side of the iPad Air. While they're almost identical internally — the iPad Mini's A7 chip is apparently clocked fractionally slower — the iPad Air's larger screen is more comfortable to use and would be my preference unless you really want extreme portability (or need to save £80$100). Mark Wherry

The Mellotron is a remarkable and enduring instrument whose haunting tones have drifted through classic albums since the 1960s. Each of the model M400's 35 keys triggers the playback of a tape that lasts just eight seconds, yet those characteristic recordings still sound magical today.

Naturally, as soon as samplers gained the capacity, it made sense to capture this venerable beast in all its glory, a trend that has continued unabated into the realm of virtual instruments and even the iPad. So if you can't quite stretch to the latest M4000 hardware but wish to commemorate the 50th anniversary of the first production unit, the M3000 is an affordable, ultra-portable Mellotron whose tape heads will never wear out.

The interface is plain and refreshingly uncluttered. Two rows of on-screen keys account for most of the real estate, spanning slightly more than the Mellotron's odd little keyboard courtesy of some creative note-stretching. From the start it's clear that this is not a purist instrument. There are welcome enhancements such as chord memory and reverb, although no options to introduce mechanical noise and other imperfections, which is fine by me. Also, while many Mellotron samples run to the full eight seconds, these are truncated by half a second to ease the strain on the iPad. Based on my experience sampling a friend's Mellotron once upon a time, I don't regard this as a significant loss. Strange noises lurk towards the end of some of those old recordings and not all of them are pleasant.

In perhaps the biggest departure from traditional behaviour, the majority of the samples can be looped, at either three or five seconds. If you opt for looping, it yields a lower memory footprint, which in turn allows a fourth tape reel to be loaded, referred to as voice D. In an M400, there were just three instantly available sound choices, accessed by an A/B/C selector switch. It was possible to obtain a blend of A and B or B and C by setting the switch at a mid-point, a trick neatly replicated here.

The full list of voices included in this 200MB download is as follows: Church Organ, Boy Choir, Female Choir, Eight Choir, String Section, MkII Violins, Cello, MkII Flute, MkII Clarinet, Oboe, Tenor Sax, MkII Brass, Trombone, Rhodes, Piano and MkII Vibes. It's a pretty generous collection and, while not exhaustive (I missed the 'GC3 Brass' much used by Tangerine Dream, for example), I doubt anyone will be disappointed by the quality. Whether it's the wavering flute, the wobbly vibes or the other-worldly eight-voice choir, each is carried off with an authenticity that cries 'play me!' True, you don't get the Mellotron's full polyphony, but obtaining 16 notes of rich, warm nostalgia from the A/B/C voices, plus a further 12 notes from voice D is not to be sniffed at, except in tears of gratitude. The original iPad is quoted at only slightly less: 12 and 12 notes.

Of the additional functions, the chord memory proved surprisingly useful. It allows up to 12 different chords to be triggered from on-screen pads and when the extra voice (D) is enabled, it is linked to the chord pads, leaving you 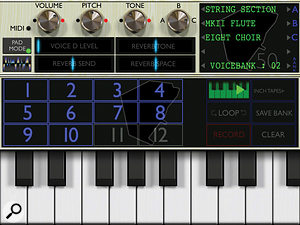 The pad-based chord memory system is easy to use, with up to 12 chords stored with each voicebank. free to play regular voices on the keyboard. If, like me, you're not partial to on-screen keys, the M3000 is MIDI-playable in the usual way. The range has been extended to five octaves and voice D is available on a separate MIDI channel. The mod wheel is employed to sweep between the three main voices and pitch bend offers the three semitones up or down of an M400.

The reverb is perfectly serviceable and there's a basic but worthwhile tone control to calm some of the traditional tape hiss. Audiobus has been chosen for inter-app audio and the well-written manual includes some practical suggestions for obtaining optimum audio quality. Finally, I should just mention the 'inch' feature. This is used to adjust the playback point of the virtual tapes whenever you need to shave off some of the distinctive attacks.

Try as I might, I can't think of many niggles. Selecting the voices is fractionally less convenient than it might be; you have to scroll through the list one by one. However, once you've assembled a rack of favourite sounds, this can be stored as a voicebank, of which there are 31 available, so it's not much of a niggle really. A voicebank stores the chords and loop modes and all voice selections.

An easy one to sum up, M3000 is an excellent achievement that ably demonstrates how far the iPad has come in a few short years. I'd take it over the Mellotrons in my once-revered Emu Vintage Pro or my Roland JV2080 Vintage board any day. Highly recommended. Paul Nagle