The latest version of Apple's entry-level music software draws heavily from Logic Pro X. Is this the return of Logic Express?

GarageBand was originally released back in 2004, and over the years, has become arguably the most popular entry-level music application ever created. Built on top of the same audio engine as Logic Pro, Apple have since released five further versions that added functionality such as score editing, podcasting and music lessons, culminating in the release of GarageBand '11 (version 6) just over three years ago. Now, to coincide with the release of the latest Mac operating system, OS X Mavericks, Apple have refreshed their whole line of iLife apps, including a brand new version 10 of GarageBand.

GarageBand 10 requires Mavericks to run and, as before, is free with all new Macs. Existing Mac users can download the new version from the App Store; however, while GarageBand — like the other now à la carte iLife applications — used to cost $14.99, the basic version is now free. The full set of content is available as a $4.99 in-app purchase, although if GarageBand detects a previously installed version, you can download the additional content for free. Installing GarageBand 10 doesn't overwrite the previous version; instead, the older application is politely moved to its own folder within the Applications folder.

Launching GarageBand for the first time is pretty much like launching Logic Pro X for the first time: you now have to wait for the basic content set to download before you can use the program. After this, the New Project window appears, which now bears an uncanny resemblance to the New Project window from Logic Pro X. Actually, it's not really that uncanny: it's basically the same window with some slightly different options. Logic Pro provides additional Details for setting sampling and frame rates, 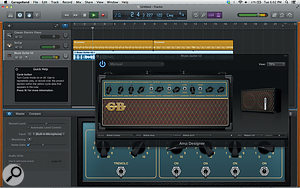 Logic Express — I mean, GarageBand 10 — in all its glory.

while GarageBand's sidebar offers access to music lessons. Existing GarageBand users will notice there are no longer options for creating Magic GarageBand or Podcast projects, and that's because these features no longer exist.

Once GarageBand's main window appears, it soon becomes clear why certain features from previous GarageBand versions seem to be absent. As indicated by the version number jumping from 6 to 10, Apple seem to have crafted a completely new GarageBand by scaling down from Logic Pro X, rather than building up from previous GarageBand versions as the company has done in the past. However, there's no need for complete panic: the wooden panels have been retained on either side of the main window.

The duties offered by the right-hand inspector in previous GarageBand versions are now performed by three different parts of the main window first seen in Logic Pro X: the Library, where presets are chosen; Smart Controls, which replaces the old Track Info panel; and the Browsers, to the right, which also gain a Notepad panel. If you're used to the old Track Info panel, the Smart Controls area is bound to cause a little confusion, since there is no way to manipulate the built-in effects in quite the same way as before. Effects are now hard-wired into the various instrument patches, and the parameters available to you have been predetermined by the patch designers, which seems a shame. On the plus side, there's an improved Visual EQ page offering more bands than before, and it's still possible to use Audio Units plug-ins, including those Apple supply with the OS (see box).

Guitarists are well catered for, since what appear to be the full versions of Logic's Amp Designer and Pedalboard plug-ins are now included. And keyboard players aren't completely left out, as Instrument tracks can enable various presets from Logic Pro X's Arpeggiator MIDI plug-in, which is nice.

As a partial compensation for the removal of Magic GarageBand, Apple have included Logic Pro's Drummer feature into the new program. 'Kyle' is included with the basic version, with his straightforward rock beats, and all the other drummers are available with the full content download, which is pretty good value since this is one of Logic Pro X's headline features. What you don't get is the Drum Designer plug-in, where you can configure your own drum kits, nor the ability to save presets within Drummer; the Feel, Ghost Notes and Hi-Hat controls are also not available. However, if you've been curious about Logic's Drummer feature and didn't want to take the plunge in purchasing the new version, GarageBand now offers a way to explore some of the functionality for a considerably lower cost.

Another nice feature GarageBand has inherited from Logic Pro X is the ability to be controlled via Apple's Logic Remote app. This is rather neat, since it provides a complimentary second-screen mixer for GarageBand (which itself doesn't have a mixer and previously relied on third-party solutions for remote control), along with all the other functionality that Logic users get, such as Key Commands and Smart Help.

Prior to the release of Logic Pro X, many users had the presentiment that it would be dumbed down to something resembling a 'GarageBand Pro'. This, as we now know, was not the case. But with the release of GarageBand 10, it seems that rather than Logic becoming GarageBand Pro, GarageBand has actually become Logic Express. This is probably bad news for GarageBand's original audience — people with little experience in the world of music technology — but perhaps good news for the sort of person who might be reading this magazine. While GarageBand isn't going to compete with the likes of Cubase or Reaper, to name but two fully featured alternatives, it is, at the end of the day, a reasonably competent music application derived from Logic Pro X that can be run, for free, on any modern Mac.

Upon initial inspection, it would seem that GarageBand no longer has global effects or supports Audio Units plug-ins. However, if you look in the Audio/MIDI section of the Preferences window, you'll find options to re-enable both of these features, which is a little obtuse. I suppose the intention of hiding these features is to make the program seem easier to use, but I would argue that this kind of design actually adds complexity: existing users are initially frustrated, and new users may never find these features at all.

Once enabled, these controls are available from with the Smart Controls Inspector — except they might not be. In order to see them, you'll need to ensure that the Smart Controls area has sufficient height, which is annoying, since there's no visual clue to indicate that this could be the problem. Even showing these controls clipped would be better, since that would imply there are more controls to be had, or perhaps even the use of a scroll bar.