Making Music On The Move By Paul White & Tom Flint

Cakewalk's Z3TA+ synthesizer made an appearance in our Plug-in Folder column way back in October 2005, and again in December 2011 when it reached version 2.1. The app reviewed here is based on v2.1, but it has been optimised for iPad devices — specifically, the iPad 2 or above. It supports Background Audio and the app-to-app audio streaming protocol Audiobus, as well as Inter-app audio, which also allows it to exchange audio with other enabled apps.

Perhaps the most obvious difference between the app and its stand-alone and plug-in forefathers, however, is that it has a deceptively large virtual keyboard, complete with modulation and bend wheels. This addition fits under the Osc, Filter, EG and LFO panels but comes at the expense of the Mod, Graphic Arp and Master sections that previously inhabited the bottom v2.1's main page. These are not lost, though, and can be found in the separate Mod/Arp page.

As before, there are six oscillators and six LFOs, each of which can be assigned a different basic waveform ready for editing. The filter includes two envelopes that work in parallel and dual modes, and there are eight envelope generators, including bipolar and amp types. The synth's complexities are heightened further by a modulation matrix which allows almost anything to be routed more or less anywhere, and which makes the synth very flexible and powerful. 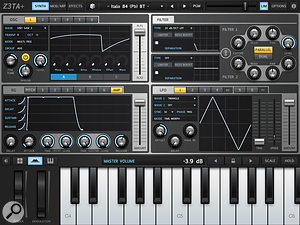 Z3TA's main screen. The app version sees the addition of a keyboard along the bottom of the interface.A control bar right at the top of the screen enables the user to browse presets, of which there are more than 500, and to quickly switch between the main Synth page, the Modulation Matrix/Arpeggiator display and the Effects window. The latter plays host to delay, reverb, modulation and distortion effects, plus a compressor and six-band EQ. Handily, the Effects' modules are easily moved using a routing panel and can be placed in any order.

Features aside, what most Z3TA+ fans will probably want to know is whether Cakewalk have exploited the iPad's touchscreen technology well enough for the synthesizer to be playable, and the short answer is yes, although it's not quite the same as having a real controller.

The iPad is touch-sensitive but not pressure-sensitive, so the virtual keyboard can't detect how hard a note is hit, but a lot of note variation can be achieved by programming the synth sounds so that they are sensitive to touch duration. In terms of size, there is only room for two octaves on the screen at a time. However, a couple of opposing arrow keys shift the keyboard by an octave each time they are tapped, and if the Lock button is disengaged, the whole keyboard can be swiped across the screen freely from C1 to C9, even while it's being played! The user is also given the option of changing the chromatic scale to something more exotic, and of replacing the control wheels with a freely assignable X/Y pad.

Most of the virtual knobs and sliders are easy enough to control by touch, but some of the drop-down menus are quite close together and require an accurate touch if they are to be selected successfully. I also found that, on occasion, some of the virtual sliders and buttons didn't respond straight away, indicating that some refinements are needed with the next update.

On a more general note, Z3TA+ could exploit the iPad's touchscreen technology a little more. For example, where there are graphic displays of envelopes and filters, Cakewalk could do away with the virtual knobs and let the user move the various nodes by touch. At present the Osc section's graphic is the only one that can be moved freely by touch, although it is also possible to touch-toggle the inter-node lines of the Envelope Generator between slow, linear and fast.

Z3TA+ is undoubtedly a very powerful synth, and it originally costs five times as much in its standard Mac and PC forms. Bearing that in mind, the iOS version, which has only been cut down in a few areas, is great value for money and worth a look to anyone who wants to get serious about sound synthesis. Tom Flint

The familiar MPC-style interface of pads accompanied by an assortment of knobs and sliders has become very much de rigueur in software drum pattern sequencers. If you're not inspired by the idea of attacking this layout with a mouse or a MIDI keyboard, but you don't have the need or budget for a fully fledged hardware controller, MidiPads by Crossfire Designs might be just the thing you need to get some grooves going.

It has no built-in sounds, but instead allows you to put together a customised MIDI control interface. The top part of the screen is occupied by a variable number of pads to tap, while the lower part can accommodate various buttons, sliders and trackpads. The process of adding and positioning these and changing their colours and labels is very simple. As long as your drum software has a half-decent MIDI learn facility, they can then quickly be assigned using note or CC data. The system is flexible enough to map a range of useful MIDI control types to different on-screen components, and multiple messages are also supported. These different elements can be resized using pinch zoom, the percussion pads snapping to three preset sizes, while the other functions can be tailored more precisely. Once set, the pads can be 'swiped' through several pages in which they can be assigned up to 64 individual values, allowing you to swap between multiple kits, for instance.

It's certainly an easy system to get to grips with: within half an hour of downloading the software, I was able to throw together a simple controller for Arturia Spark, with eight pads mirroring the software interface, transport controls, a latching button for the metronome, and sliders to operate volume and filter sweeps. 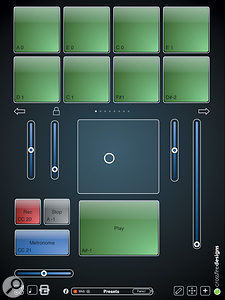 MidiPads gives you a number of different MIDI-triggering graphical devices to arrange as you please.Once you've set up a configuration that you want to keep, it can be saved as a preset. These can then be transferred via iTunes, allowing them to be shared with other users. Full use is made of the iPad's various sensors, and the tilt position can be used to send data. There's also scope for MidiPads to respond to incoming messages, for instance by blinking the pads in sync, or employing sliders as level meters. Velocity can be set to respond to two-finger taps or tapping on different parts of the pad.

I found the latency when using iRig on an iPad 2 to be acceptable, although I'd probably be inclined to enable quantising on input where available — at least until I'd had more practice. As well as sketching out drum patterns, I could also imagine using this utility on stage for simple triggering and controlling duties with something like Ableton Live. MidiPads supports hardware MIDI connections with CoreMIDI-compliant devices, and MIDI over Wi-Fi as well as virtual MIDI for controlling other apps.

In the realm of iPad controller apps, MidiPads currently occupies a useful niche. A free 'lite' version is available, but at only £3.99$5.99 for the full version, you might find yourself upgrading this one quite soon. Ben Glover

IK Multimedia's iOS product range has just gained AmpliTube Orange, an amp-simulation package for iPad or iPhone distilled from their existing Mac and PC AmpliTube versions. The format will be familiar to those who've come across IK's amp modelling products before: the user gets to choose from six different Orange amplifier heads and five speaker cabinets, any of which can be used with any of the amplifiers. There's also a choice of a modelled SM57 or U87 microphone to stick in front of your modelled cabinet. The Orange amps on offer comprise the OR50, Rockerverb 50, Thunderverb 200, Tiny Terror, AD30 and the AD200 Mk3 Bass. The cabinets are all based on existing Orange models and provide 4x12, 1x12, a couple of 2x12 and one 15-inch variants. For practice, there's a built-in metronome, tuner and a recorder, the latter being expandable from one to eight tracks via an in-app purchase.

In addition to the amp and speaker models, there are also four slots into which you can load the included modelled stomp effects. These are listed as Echo Trip Delay, Highway Drive overdrive, Shaker Tremolo and Noise Filter, the last incorporating high-cut filtering to make it less abrupt than a simple gate. The Echo Trip Delay isn't available until you register your purchase.

The various Orange amp heads have very different characters, from the bratty Tiny Terror to the almost statesmanly AD30. Where the original amplifier included reverb, this is recreated by its model. User presets may be created and saved, and if you happen to have either the iRig Pro or iRig MIDI, you can also use MIDI to control key parameters. 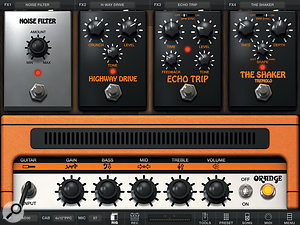 Tonally, the app captures the essence of the various Orange amp models, and you can select whether to play back through headphones or via speakers for the best results. I've always thought Orange overdrive a touch gritty-sounding and that is captured quite accurately in this app, though you can shape the overdrive character over quite a wide range by combining your choice of amp head and speaker with the drive stomp effects box. The delay and tremolo pedals are also very straightforward, and deliver pretty much what you'd expect from their hardware counterparts except that you can change the modulation waveform in the tremolo. Best of all, the app costs just over a tenner$15, so what's not to like? Paul White