Can Polish speaker makers APS tempt you with their new point-source Coax monitor?

Poland seems to be a hotbed of audio equipment production at the moment — I’ve lost count of how much new gear I’ve reviewed from Poland this year! Audio Pro Solutions (APS) were established in 2006 to build loudspeakers for both the hi-fi and pro-audio markets. The range currently comprises a large three-way, a conventional two-way, two subwoofers, and the subject of this review, a coaxial two-way monitor — although you probably guessed that from the product’s cunning name!

Coaxial drive units comprise a tweeter within the bounds of a mid/bass driver. In this case we’re talking about an SEAS driver comprising a one-inch fabric dome tweeter within a seven-inch magnetically-shielded polypropylene bass/mid driver. The bass/mid driver is rated at 8Ω, while the tweeter has a 6Ω nominal impedance, and a second-order active crossover integrates the two drivers at 3kHz. The main benefit of the coaxial approach is that the treble and bass remain accurately time-aligned to each other regardless of the listener’s position relative to the cabinet. With a conventional tweeter-above-the-woofer design, any vertical movement of the listener results in different time-of-arrival delays for the bass and treble because of the different distances between the drivers and listener, which can result in unwanted coloration effects. The main downside of the coaxial approach is the added construction complexity and, consequently, the cost of the drive-unit combination. 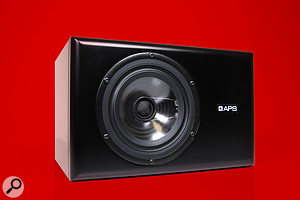 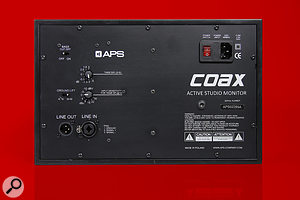 There are various options for tweaking the LF and HF levels, as well as the input sensitivity.The APS Coax units are housed in a compact (330 x 210 x 300 mm, WHD) landscape-oriented MDF cabinet constructed with a 28mm baffle and 15mm side-walls, with radiused edges to minimise diffraction. An internal back wall separates the acoustic volume from the electronics chassis, and the cabinet is a sealed design, rather than ported, weighing in at a modest 11kg. The cabinet is finished in a nice semi-gloss black paint, although a variety of other paint and veneer options are available. The front baffle also carries an illuminated APS logo and a warning LED that shows blue when the unit is powered, and flashes green when the tweeter amplifier’s limiter is activated, or red for the bass amplifier’s limiter.

The amplifier chassis accommodates a pair of TDA7294 ‘chip amps’ — monolithic Class-AB amplifier modules — which deliver 70W into each of the two drivers with elaborate built-in protection systems.

The audio input is via a combi XLR accepting balanced and unbalanced XLR or TRS/TS connections. A parallel-wired male XLR is also provided (for looping through to an optional subwoofer). A ground-lift toggle switch is also provided to separate the chassis and audio grounds, if required.

The input sensitivity is specified as 0dBu for full output (101dB SPL RMS or 109dB SPL peak, both measured at one metre), but an eight-position rotary input attenuator switch allows the speaker to accommodate signals levels up to +30dBu, and down to -10dBV (for full output). A second eight-position rotary switch allows the tweeter sensitivity to be adjusted over an unusually wide range between +3 and -5 dB. A second toggle switch applies bass cut to compensate for boundary loading when placed near a wall or corner, reaching -3dB at 90Hz and -6dB at 50Hz.

The rear panel also carries the usual IEC mains inlet (factory specified for 230V AC in this case) with an integrated on/off rocker switch and fuse holder. The switch looks as if it should illuminate, but doesn’t.

The APS Coax’s landscape cabinet format is clearly intended for console meter-bridge and workstation shelf mounting, and the drive units are offset towards one side to allow the choice of having the drivers on the inside or outside of the stereo pair. This offset makes sense from the point of view of dispersion and imaging accuracy, but might also have been to facilitate a pair of front-panel ports in early incarnations — I’ve seen pictures with front ports in a review of an incarnation of this model from early 2013.

I did most of my listening with the drivers on the inside edges of the stereo pair, as this clearly gave the most stable stereo imaging in my listening environment.. In fact the imaging was particularly good, with excellent impressions of width and depth on appropriate material, and with a sharp, well-focussed centre. The specifications claim a bandwidth extending between 50Hz and 30kHz within a ±5dB tolerance, and I can believe that. As a sealed-box monitor, the low end starts to roll off higher than a ported cabinet of similar dimensions would, but the slope is much gentler and so there is some usefully informative output down to 30Hz or below. Just don’t expect to feel your internal organs being rearranged or your trousers to flap in response to the kick drum beats!

Initially, the APS speakers sounded quite forward and bright, but I found that trimming the tweeter sensitivity down to -3dB rendered a more palatable balance, and after extended listening I softened that adjustment to -1.5dB. Resolution and transparency are both very good throughout the mid-range, with an airy, open top end. The transient response is crisp and precise, and especially tight and accurate at the low end; bass guitar and kick drum beats are nicely separate and well-defined.

This is an unsual but interesting design. I am an advocate of sealed-cabinet monitors as a general rule, because of their audibly better LF transient response behaviour, and the APS Coax exhibits that characteristic well. I’m not convinced of the benefits of coaxial drivers in practice, but the concept is sound (excuse the pun) and it’s certainly well implemented here. The voicing of the Coax seems a little bright to my ears and preferences, but there’s plenty of HF adjustment range to suit all tastes and room acoustics. These Coax monitors can also generate surprisingly high SPLs, although I felt they started to sound a little strained long before the warning LEDs flashed. At sensible and practical listening levels, they sound very good indeed, with excellent dynamics. Well worth auditioning.

There aren’t many two-way monitors with coaxial drivers on the market, but the Equator Audio D8 and Q10 models bracket the APS Coax in price, being roughly half and double the price, respectively. Similarly, among the relatively few sealed-cabinet monitor speakers, the APS Coax’s price places it midway between the Acoustic Energy AE22 Actives, which are roughly half the price, and the Unity Audio Rocks, which are about twice the price.