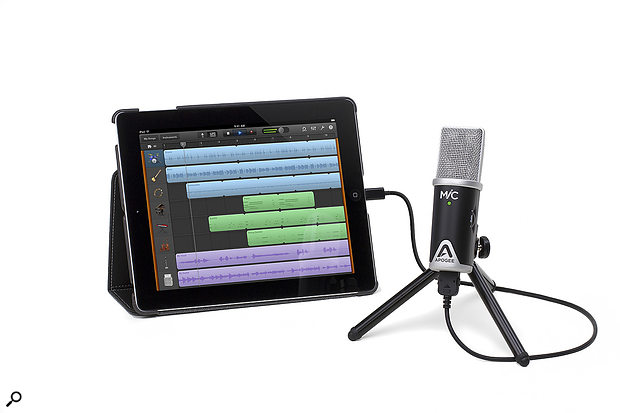 The MiC 96k with its included stand.

The MiC 96k is a condenser microphone that improves on its previous incarnation by offering higher sample rates as well as a mic-stand adapter and both 30–pin and Lightning connection cables. A USB cable is also included for connection to a Mac. Despite an incredibly small stature, construction is sturdy with a metal body and a tough tabletop stand. The MiC requires iOS 6.1 or higher, or OS 10.7.5 on the Mac (including OS 10.10).

Apogee pitches the MiC’s capsule as ‘studio quality’, but users shouldn’t get too excited about this claim. It sounds perfectly fine for acoustic guitar and other instruments, but gives a slight nasal quality to the mid-range of male vocals that requires EQ attention; something not always easily accomplished on mobile apps such as GarageBand. The polar pattern seems to be more like a wide cardioid, picking up greater ambience than expected. Close up, room sound is reduced, with flattering proximity on voices, but popping is prevalent. I can’t help feeling that Apogee could have placed some foam around the capsule or provided a pop shield. Nevertheless, it’s simple to get up and running and does a decent enough job, aside from the issue outlined above (plus a little inevitable latency). I’d recommend trying out the MiC before buying to see how it performs on your particular voice. 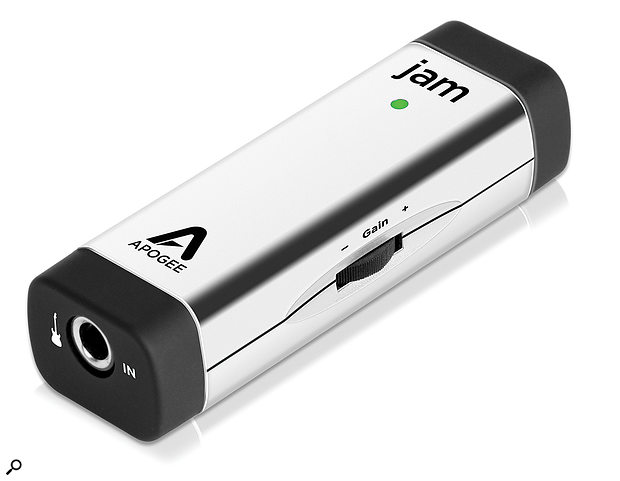 The Jam 96k is a single-input, compact device for recording guitar and bass. Like the MiC, it has all the important cables and the same operating system requirements. The Jam sports a new nickel-plate finish and is solidly built. There is nice attention to detail, like the locking connection cable that stops it becoming unplugged during a session. 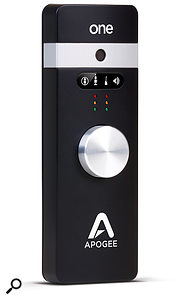 The ONE For iPad & Mac, to give it its full title.

Getting takes recorded is incredibly simple. The gain dial offers signal boost with plenty of headroom, emulating the response of a valve amplifier at higher levels, and the multi–coloured LED is useful for monitoring level whilst knocking out riffs! Like the MiC, there is a slight latency when monitoring the incoming signal as audio output is provided by the onboard sound of the iPad/Mac. This is perfectly workable though, even when passing the signal through a real–time effect such as an amplifier simulator in GarageBand.

All in all, the Jam 96k provides a simple and great-sounding way to track guitar and bass on the move, or even rehearsing without disturbing others. However, those wishing also to capture vocals or acoustic instruments might well take a look at the ONE instead, on account of its various input combinations.The ONE interface enjoys a complete redesign and features two simultaneous inputs: an instrument, plus either the internal omnidirectional microphone or an external (phantom-powered) microphone. With D/A converters on board, all audio output comes from the device itself.

When used with an iPad, an external PSU powers the interface whilst also charging the iPad, or alternatively AA batteries can be used. On a Mac, the ONE takes bus power from the USB socket. The interface comes with a mic stand bracket, a breakout cable for external inputs, plus connection cables. An accompanying application — Maestro — is available for free download in both iOS and desktop versions, with the same operating system requirements as the other two devices.

In use, the internal mic performs well for a wide range of instruments and voices — in my opinion, better than the capsule on the MiC. Close placement gives an intimate sound without the proximity encountered with a directional mic, and further away, increased room ambience. There seems to be some high–pass (rumble) filtering on the mic, which doesn’t render it suitable for instruments like double bass, but does mean that layered tracks sit together easily. As you would expect from Apogee, the preamp for the external microphone offers lots of clean gain to your favourite microphones, whilst the three–stage metering is a useful feature for level setting. 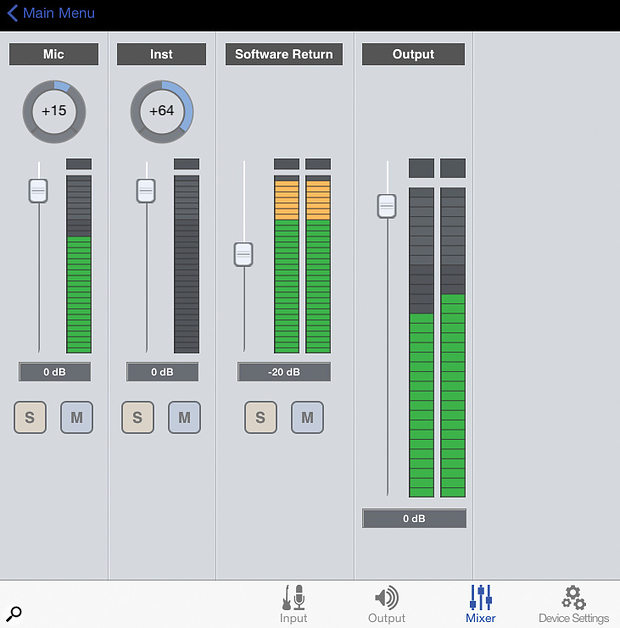 The mixer tab on Apogee’s Maestro iPad app that accompanies the ONE. This page makes setting up a zero-latency mix really simple, with level and pan controls for each input and some useful output meters.

In the Maestro app, setting up a monitor mix is a real breeze: there’s no latency and you can pan input signals to help with separation in the headphones. Quality of audio playback is largely impressive, but unfortunately I did encounter a problem that detracts from the overall experience. When switching apps in iOS or starting/stopping the playback of system audio on the Mac, I noticed audible pops and glitches in the audio output. I’m hoping that this is something that Apogee could fix fairly easily. Once noticed, it’s annoying, but luckily doesn’t have any negative effect on recorded audio.

In summary, the ONE is a versatile all–rounder interface for both iPad and Mac that offers a simple approach to operation, durable hardware and decent preamps and converters. Aside from the niggle described above, it’s a joy to use and makes recording on the iPad a more pleasurable and professional experience.