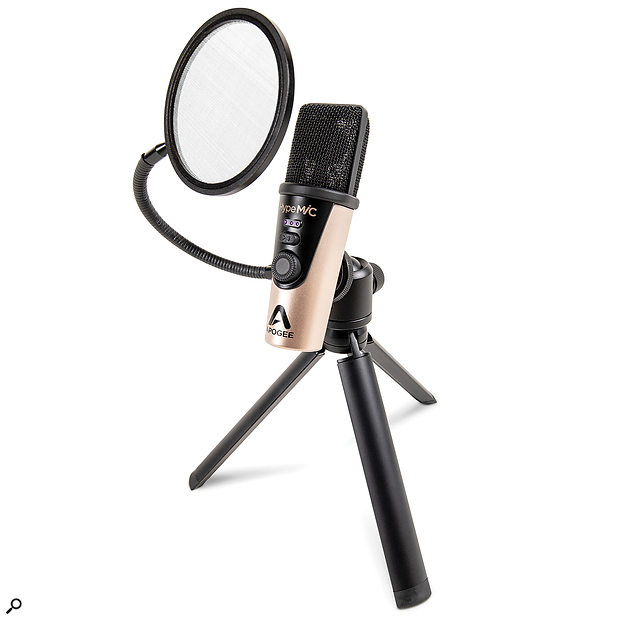 With its built-in analogue compressor, Apogee's latest USB mic aims to give you radio-ready recordings straight out of the box.

USB microphones are nothing new, and nor are Apogee new to making them — previous models include the original MiC, the MiC 96k, and their current model, the MiC+. However, the new Apogee HypeMiC takes things a step further: in addition to its USB computer/tablet connectivity, a headphone output with variable source/DAW mix monitoring and Apogee‑quality converters, it also includes a three-preset analogue compressor, designed specifically to flatter spoken or sung vocals.

Outwardly, the HypeMiC looks very similar to the Apogee MiC+, and uses the same medium‑diameter cardioid‑pattern capacitor capsule. It can run at up to 24-bit/96kHz and comes with an accessory kit that includes a substantial metal desktop tripod with 'tilt and pan' mic mount, a metal mesh‑screen pop filter and a semi-rigid woven carrying case that also contains three types of cable: micro-USB to USB-C, micro-USB to USB-A, and micro-USB to Apple Lightning connector. The mic offers plug-and-play operation with iOS (version 9 or later), Mac OS and Windows, and is fully compatible with Core Audio on the Mac OS platform, meaning that no additional drivers are necessary.

The noise performance of the built-in preamp is specified as -108dB A‑weighted at 0dB gain, with a maximum gain of 46dB avilable. Sensitivity is specified as -36dB (94dB SPL at 1kHz). However, there's no frequency plot and no specified frequency response, which is unusual for a microphone of this price.

The Apogee HypeMiC is built to last and lives up to the Apogee name for quality, both in build and performance.

The compression settings are indicated by three tiny, multi-colour LEDs that also double as signal level meters. The compression options can broadly be described as off, gentle, medium and full-on. However, while the mic is perfectly suited to vocals, its high SPL handling capacity of 130dB means it can also be used with louder sources such as drums, horns, electric guitar cabinets and so on. Apogee clearly intend this mic to cover as many applications as possible, with podcasts and YouTube performances at one end of the scale and studio recordings at the other.

Physically, the mic looks like a big side-address studio mic in miniature, measuring just 124mm in length, and featuring a black mesh basket and heavy cast body finished in gold with a black control area. A 3.5mm stereo mini-jack for the phones and a micro‑USB port are located at the end of the mic where you'd normally expect to find an XLR connector, and the necessary controls are located on the 'hot' side of the mic body. On the reverse side of the body is a camera thread used to attach the mount.

A push switch within the rotary mic gain control selects the compression mode, and another push switch below the LED display adjusts the source monitoring balance in five steps, making it possible to set up zero-latency headphone monitoring of whatever is being recorded with the microphone. You just have to remember to turn down DAW software monitoring for the track you are recording to avoid hearing the slightly delayed version at the same time as the zero latency version.

In use, the mic delivers a clean sound that is sufficiently neutral to suit a wide range of voice types as well as instruments, and with the compressor turned off it sounds essentially the same as the Apogee Mic+. Those compressor options are very well designed, though, as even at the strongest level, the voice sounds more solid and up-front but without exhibiting any obvious over-compression artifacts. The strongest setting suits both pop vocals and 'radio voice' style presentations. Even if you have access to plug-in compressors, the ones built into the mic might well do a smoother job, so a good strategy might be to select the level of compression below the one you think you might ultimately need, and then add a little extra plug-in compression when you come to mix if you really need it. Tests with an acoustic guitar turned in useful results that needed little EQ, though positioning the mic using the desktop stand was far less easy than using a mic on a conventional stand.

While not cheap, the Apogee HypeMiC is built to last and lives up to the Apogee name for quality, both in build and performance. The built-in compressor is far from being a gimmick, so if you need a USB mic that you can rely on to make you sound good and with the minimum of fuss, the HypeMiC is worth a closer look.

While there are well specified USB mics offered by pretty much all the big names in mic manufacture, this is the only one I've used that includes an analogue compressor.

By adding a practical analogue compressor to a USB mic, Apogee have managed to add a new twist to an established product type.