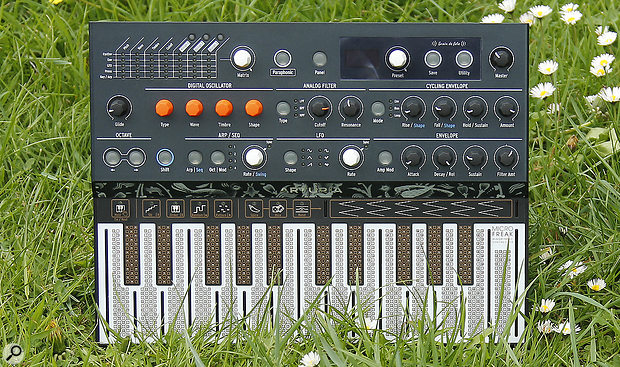 Arturia throw out the synthesizer rulebook with an instrument that dares to be different.

Barely a month goes by without the announcement of a cute analogue monosynth, promising to deliver that certain something that plug-ins can't. But is it really all about the analogue factor? The Eurorack scene is far from exclusively analogue, with many beloved digital modules. Perhaps the return of hardware synths is as much about the immediacy of hands-on instruments.

With tons of excellent, affordable analogue synths to choose from (not least Arturia's own MiniBrute and MicroBrute) I for one have been keen to see something different. The MicroFreak is a clever idea. Take a multi-algorithmic DSP sound engine, like Mutable Instruments' Plaits or Braids modules or Teenage Engineering's OP‑1/OP‑Z, and build it into a classic‑style synth like the MicroBrute.

As well as being intrigued by the potential of some fresh sounds, I was keen to see if the MicroFreak could become my new travelling companion and replace an ailing USB mini keyboard. With less voltage required than a typical analogue, the Freak can run from USB power. It's also very light, there are no keys to break, and it can work as a controller keyboard and sequencer over USB, MIDI or CV.

A Touch Of Madness

As we're talking keyboards let's start with the MicroFreak's most divisive feature. The MicroFreak has 'Grain de folie' printed on its front panel, and one of the ways Arturia have injected a 'touch of madness' is by opting for a capacitive keyboard instead of regular moving keys. This is certainly quirky, though not that uncommon in modular systems. Buchla have long favoured them and you see touch and pressure controllers for Eurorack from the likes of Make Music and Pittsburgh Modular.

The 'keys' are laid out on a PCB panel with a matrix of exposed nodes that sense contact with your skin. The white keys are separated by shallow ridges and the black keys are part of a slightly higher layer that also houses the performance touch strip and various touch-sensitive arp and sequencer controls.

I've not spent much time with this kind of keyboard before and it took quite a bit of getting used to. I quickly noticed one advantage: they're highly sensitive, and as there's no travel you can play notes extremely quickly. The flip side is that it took me ages to stop firing off notes accidentally with fingers that would normally be lightly resting on the keyboard.

The keyboard generates both velocity and aftertouch data, although again it took some practice to understand how to get the best out of these. The keys sense pressure based on both the firmness and area of the connection with your skin. To get higher values you not only have to hit/press harder, you also have to flatten out your finger to widen the contact zone. Once I got the hang of simultaneously applying pressure and rolling my fingers flatter on to the key I found I could get much more nuanced and controllable aftertouch than even with my main master keyboard. It's tricky when you're playing certain chords as it's awkward to get more contact, and trying to play fast runs with high velocity is also difficult as you're using your fingertips.

Get Your Freak On

The MicroFreak's digital oscillator has 12 different algorithms, providing a huge range of sonic raw materials. The oscillator routes into an analogue filter and VCA then out into the world. There are no effects except for a chorus built into a couple of the algorithms. We'll look at modulation in more detail, but the spec is one main envelope, an LFO, a function generator that can be used as another envelope or LFO, and a detailed mod matrix.

Being digital, the Freak has the advantage of patch memory. There are 256 slots, of which half are pre-populated with factory sounds and several more with template starting points. All can be overwritten. The synth always powers up on patch 1. Factory presets can be misleading, especially the initial slots aimed at grabbing attention in a showroom, and I have to be honest and say the first few left me a little unmoved. Happily, these quickly give way to more subtle and interesting examples, and were easily livened up with some random twiddling even before I knew what I was doing.

There's a mixture of endless encoders (oscillator parameters and the LFO/sequencer rates), regular knobs (envelopes and filter controls), and multi-state buttons. The MicroFreak has multiple pick-up behaviours for when the knobs are out of sync with a recalled preset, including Scaling, which is always my preference. There's also a Panel button which instantly snaps all the parameters in the loaded patch to the current knob positions.

Choosing and adjusting the core sound model for a patch is done with the four orange encoders in the Digital Oscillator section. The first, Type, selects the algorithm. The other three, Wave, Timbre and Shape, are named fairly arbitrarily as they alter the sound in different ways depending on the Type.

As an example, the first and most simple Type is Basic Waves. In this algorithm the Wave encoder morphs between a square and sawtooth wave, the Timbre adjusts symmetry (providing pulse‑width modulation), and the Shape knob mixes in a sub‑oscillator. (For a more classic monosynth sound there's the Virtual Analogue algorithm from Plaits — more on that in a moment.)

Arturia might have stopped there but they've made the MicroFreak a whole lot more interesting by implementing seven of the synth models from Mutable Instruments' Plaits Macro Oscillator module for Eurorack. Mutable have open-sourced the Plaits sound engine code, meaning it's available for anyone to use and adapt. As the Plaits algorithms were designed to be complex sound generators that could be shaped with a small number of controls, they're an ideal fit for the MicroFreak, and may have in fact been part of its inspiration in the first place.

With its many synth engines it's difficult to sum up the sound: it can do squelchy sequences and euphoric strings if you like, but more often than not it produces something unique, from abrasive to delicate.

As well as the pseudo-dual‑oscillator Virtual Analogue model, there's a wavefolding/shaping triangle for West Coast flavour. In a more traditionally digital vein there's a two‑operator FM model, and a granular formant synth. The Chord synth is lots of fun, generating 12 different one-finger chords which can be progressively transposed and inverted (great for anything from textured washes to bouncy chip‑tune sequences). Speech is an old-school speech synthesizer based on classic 8-bit speech synth systems like the Texas Instruments Speak & Spell. This has several modes with different sets of vocal sounds and words, a parameter to scan through the sounds, and control of formant. It works slightly differently to the original Plaits equivalent, in that the words are always played in full and a single knob affects both formant and speed. In Plaits you can actually scan through the words.

Last up is Modal, the only algorithm from Plaits' Percussion modes. This is super versatile considering you have only three parameters. It can reach everything from plucks and string strikes to mallets or metallic clonks, and when served with a touch of external reverb and some subtle pressure modulations it quickly became my favourite mode.

The MicroFreak has an analogue SEM-style 12dB/oct filter with low-, high- and band-pass modes. It's a lovely choice for shaping and smoothing out the digital sources, and is still capable of some self-resonating squawk when you want it. A dedicated knob sets the amount of filter modulation from the main envelope. The envelope is ADSR but has a linked decay/release time. This sets some limits on sound design but it's not something I have a massive problem with on a synth like this.

Like the MicroBrute, you can choose to use the main envelope generator to control the VCA, or simply hard gate it from the keyboard/sequencer. Either way, with the Paraphonic button switched off the Freak behaves like a regular monophonic synth with its analogue VCA. However, if you engage Paraphonic mode the MicroFreak switches to using four independent digital VCAs, shaped polyphonically using the main envelope contour. The keyboard, sequencer and key pressure are also four-voice polyphonic, and the four oscillator parameters can be modulated per voice. In other words, the MicroFreak is essentially four-voice polyphonic outside of the filter and cycling envelope.One quirk that is perhaps a side effect of this switchable monophonic/paraphonic architecture is that the VCA level is not on the modulation matrix (so tremolo/AM is off the table) and it's not immediately apparent how to harness velocity. It turns out that there are some patch settings in a Utility menu, some of which are stored with the preset. One of these is an overall level trim per patch. Another chooses whether the pressure modulation source comes from velocity or aftertouch. I was initially a bit alarmed at having to choose, but then saw that there's a further setting in the menu list to map velocity to volume directly. Incidentally, the velocity/aftertouch toggle only affects the internal sound patch, and both are transmitted to the MIDI output.