Sanitise dirty talk on the spot with Audionamix's effective and easy-to-use plug-in.

One of the perennial difficulties with recording speech outside of a controlled studio environment — such as for location film or TV sound, or radio street interviews — is unwanted background noise. A little background noise is usually a good thing, as it helps to set the auditory context, but problems arise when it is loud or intrusive enough to degrade the intelligibility of what's being said. 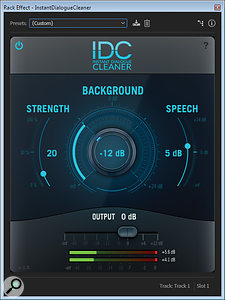 The key factors in good intelligibility come down to the basics: careful selection of the recording location, and appropriate mic placement and type. Get these three parameters right and the recording will generally work without problems, but often one or more of these factors may be out of the engineer's control, and so dealing with intrusive background noise is a common post-production requirement.

Audionamix claim that IDC "excels at addressing common audio issues, including complex interference, wind, birds or insects, car and plane interference, and roomy recordings", and it is clearly a tool intended for the film and broadcast industries for use by video editors, dialogue editors, radio production staff and the like.

Whereas the previous SVC system required a live Internet connection to process audio remotely (and not in real time) on Audionamix's cloud servers, IDC is a completely self-contained plug-in. Its installer offers all the usual formats (VST2/3, AAX Native, AudioSuite and AU), and the plug-in runs on all the usual DAWs and video-editing platforms, requiring an iLok account for authorisation. The only negatives here I can see are that there is currently no demo version available, and that although IDC is a real-time processor, it does introduce significant latency that might need to be compensated for in some applications. There have been reports of noticeable processing lag when using IDC in Reaper under some Windows platforms. The worst case I experienced was around one video frame (40ms), but I didn't have any problems in other applications, and ran most of my tests within Adobe Audition on Windows 7.

Despite the system's sophistication, the user interface has been kept extremely simple, with just four controls. From the user's point of view, in fact, it's very similar to the Dialogue Isolate module controls in iZotope's RX6 and RX7. IDC is also fully automatable, if required. A bypass button sits in the top right-hand corner, while an output level slider is placed horizontally at the bottom along with stereo bar-graph metering — these being needed to compensate for any level changes resulting from the signal processing. The three main dialogue processing controls are placed in the centre of the window, comprising a large rotary knob bracketed on each side with curved sliders.

As IDC is a real-time processor there is no 'acquire' mode to obtain an 'audio fingerprint', nor any need for a 'learning pass'; the big central knob alters the relative level of the (unwanted) background noise directly, spanning a range of +24dB to fully off. The amount of attenuation/boost being applied at any given moment is shown numerically in the centre of the knob and, as with all digital noise processing systems I have used to date, modest noise reduction amounts sound better and more natural than a heavy-handed approach!

The slider on the right-hand side allows the level of the (wanted) speech to be adjusted independently, with a range of ±24dB, while the slider on the left alters the strength of the AI algorithm. Higher values encourage the algorithm to remove more background noise but with an increased risk of audible artifacts, while lower values preserve the speech better but reduce the overall effectiveness of noise removal.

As with all digital noise processing systems I have used to date, modest noise reduction amounts sound better and more natural than a heavy-handed approach!

In use, IDC is quick to dial in with a few tweaks of the controls, and is pretty effective too — provided the expectations are for improved intelligibility rather than perfect and complete removal of all background noise! It seemed to me that IDC works best with high levels of fairly stable and continuous background sounds: generator noise, air-conditioning, distant traffic and that kind of thing. It is also very effective at drying up reverberation around dialogue captured in very lively-sounding spaces.

Under these kinds of adverse conditions, IDC can reduce background noises very well, and render previously confused and indiscernible dialogue impressively understandable again. I found a 12-18 dB reduction of background noises easily achievable with minimal audible processing artifacts — a dramatic improvement. If the background attenuation is pushed too hard the processing imposes a kind of gated character with some low-level pumping effects, and the dialogue itself can get a little burbly, but that might be a price worth paying to preserve intelligibility. More modest attenuation settings may still leave a usefully quieter track with a welcome improvement in speech clarity. Although it's a stereo plug‑in, I found IDC worked best when processing mono (or dual-mono) material, probably because any processing artifacts tended to be better masked and thus less audible.

Given the technology employed here, perhaps that's not really too surprising that IDC struggles more when trying to deal with very random, transient and impulsive background sounds. Having said that, however, even in these more challenging conditions IDC can still usually improve the dialogue intelligibility to a surprisingly degree, albeit at the expense of more audible processing artifacts. Dialling the Strength control back a bit usually helps, of course, and trading off between the background and dialogue level controls often reveals a clear sweet spot. I found 6dB of background reduction a more typically acceptable setting under these kinds of varying noise conditions, although better results could often be achieved if the raw signal was processed intelligently before being tackled with the IDC. For example, recording speech with an unprotected microphone out of doors on a blustery day generated high levels of varying wind noise with a lot of low-end energy, which IDC alone struggled to improve, but high-pass filtering the track before IDC processing produced much better results.

In situations where the background noise is reasonably low and well-separated from the dialogue I found IDC tended to do more harm than good, its processing artifacts being more easily noticed, so other forms of noise-reduction processing would probably be more appropriate for that kind of material.

Overall, Audionamix's Instant Dialogue Cleaner is a very powerful but easy-to-use tool which is particularly effective at improving dialogue intelligibility in the most troublesome of recordings. It's not perfect, obviously, and some audible artifacts are often present, but when what is being said really matters, IDC can really save the day!

The closest alternative I can think of is the Dialogue Isolate module in iZotope's RX, although that is only available as a part of the whole suite, and not as an individual plug-in. Other 'one-knob' dialogue noise‑reduction plug-ins include Waves' NS1 and Accusonus' ERA Noise Remover.

An extremely powerful but easy-to-use dialogue-cleaning tool which is particularly effective in the most challenging situations, especially where the background noise is reasonably constant.