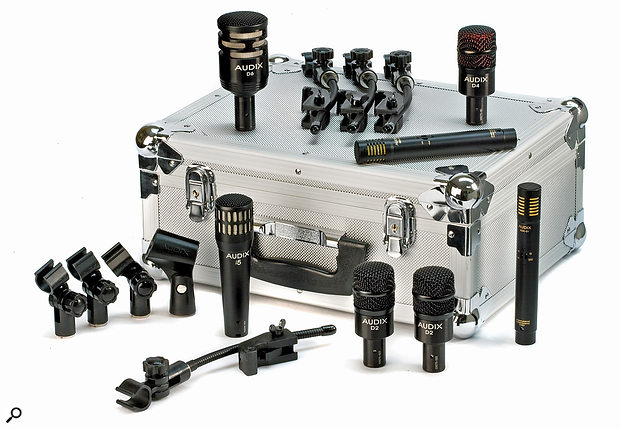 With its world-class mics, rugged carry case and comprehensive accessories, Audix's DP7 is a one-stop shop for drum recording.

Drum mic kits can be convenient and cost-effective, but they can also be confusing. They come in all price ranges, from ridiculously cheap to the price of a small car, and to confuse the issue further, there are some kits of full‑sized mics and others based around miniature clip-on mics. So what's the most practical option for the serious home studio?

Audix produce a number of drum‑microphone kit variants based on combinations taken from their range of discrete, full-sized microphones. These are supplied in a foam-lined camera‑style case, and all of them include Audix's D6 kick drum mic and i5 snare/tom mic, augmented by further models. Those who already have suitable overhead mics might gravitate towards the DP5A kit, which comprises a D6, an Audix i5, a pair of D2 tom mics and a D4 floor-tom mic, plus all necessary rim mounts and clips. None of the individual mics in the kit are new — in fact, we reviewed the i5 way back in May 2007, and found it to be a solid all-round performer, not only as a snare and tom mic but also for recording guitar cabinets, vocals and even acoustic guitar. However, it seems we never got around to reviewing the D6, which has become something of a go-to kick‑drum mic in professional circles. This review aims to redress that omission.

For this review, we were sent the DP7 kit, comprising a D6 kick‑drum mic, an i5 for the snare, two D2 tom mics, a D4 floor-tom mic (which can also do a good job as a kick mic) plus a pair of ADX51 capacitor mics with windscreens for use as overheads. Included are gooseneck stand adaptors for the overheads and rim clips for the snare and tom mics, once again all packed in a custom lined camera case. The D6 kick‑drum mic is the only mic in the kit that I haven't had the pleasure of using before, so I was keen to see how it worked out.

The D6 is a transformerless, dynamic, cardioid‑pattern model, designed and manufactured in the USA. It features what Audix call a VLM (Very Low Mass) diaphragm to help it keep up with fast transients, and boasts a frequency response of 30Hz-15kHz, plus the ability to handle sound pressure levels in excess of 144dB. In this kit it fills the role of a kick‑drum mic, but its extended LF response also makes it suitable for use with large toms, bass guitar cabinets and the low end of rotary speakers. Note that rather than offering a flat response, the mic is voiced specifically for kick drums, with a mid-range dip at around 700Hz plus a peak lift between 5-12 kHz. In this respect, its response curve is broadly similar to that of an AKG D112. The idea is to suppress boxy overtones while retaining plenty of depth, at the same time as slightly enhancing the impact transient of the beater. While this reduces the amount of EQ needed when recording kick drums, you may need to apply some mid boost to compensate when recording other bass instruments, depending on the tonality you are trying to achieve.

Despite its chunky appearance (the mic is around two inches wide at the main body), the D6 is lighter than it might appear, at 254g, due largely to the use of a machined aluminium body rather than a heavier alloy casting. It has a practical black anodised finish, a steel mesh grille and a gold-plated XLR connector. A version with a silver finish is also available. The mic comes with a heavy-duty nylon stand clip and, if bought separately, a carrying pouch. A tom rim-mounting clip is also available as an optional extra. The mic has a standard balanced output with an impedance of 280Ω at 1kHz and a lowish sensitivity of 0.8mV/Pa at 1kHz, which is commensurate with its intended high-SPL applications.

"The real revelation for me was the D6 — why did I never try one before?"

The familiar mics in the kit performed as expected, delivering solid and full-bodied results on toms, snare and overheads, but the real revelation for me was the D6 — why did I never try one before? You may recall my attempts to coax a decent kick sound out of my 16‑inch jazz bass drum a few months back, but no matter how I tuned it or what mic I used, it always sounded like somebody slapping a suitcase with a partly-thawed herring. Not so with the D6, which captured a serious amount of low end that the previous mics I tried out just seemed to ignore. It may be that the lowish sensitivity of the mic also helps as it avoids working the input of the mic preamp too hard, but whatever the reason, it restored my faith in small kick drums. It must sound huge on a full-size kick drum! That mid-range dip keeps the sound free of boxiness with little or no added EQ, and there's plenty of beater definition too. I'm just going to have to get one of these mics.

Overall, the DP7 represents extremely good value for money. It isn't the cheapest drum‑mic kit on the market, but it is far from the most costly and it delivers first‑class results. The physical size of the D2 and D4 dynamic mics, which have short bodies, makes them easy to position as tom mics, and the rim clips holds them very firmly in place. As we discovered when we reviewed it, the i5 is a very capable all-rounder and makes an effective snare top mic, though some users might also want to mic the underside of the drum to capture a bit more snare snap. The small‑diaphragm ADX51s, with their recessed pad and filter switches, do a workmanlike job as overheads, and although you can buy more exotic overhead mics or splash out on ribbon models, they may end up costing you more than the price of this entire mic kit. There's really nothing to dislike here, so if you want to make the most of your drum kit without spending the earth, this set of mics will do a great job, as well as doubling up on a number of other dynamic mic duties when you're not recording drums.

Most of the major mic manufacturers offer complete sets of drum mics. The Sennheiser 600 set comes closest in terms of content and price, but also check out Earthworks, Sontronics, AKG, Shure, Audio‑Technica and Beyerdynamic.

The mics in this kit may not be recent additions to the Audix stable, but that doesn't stand in the way of it being an excellent solution for drum miking, and it is attractively priced given that you get seven quality mics, accessories and a case.