As their name suggests, these unassuming two-way loudspeakers employ a traditional, tried-and-tested design — and they pull it off surprisingly well.

For those unfamiliar with Polish company APS (standing for Audio Pro Solutions), they have been trading for 10 years and have a range of active monitors and subwoofers in their catalogue. These days there’s very little you can tell about a loudspeaker just by looking at it: outwardly the APS Klasik is just another black-box, two-way, rear-ported active monitor with few external distinguishing features. And, like many other monitors aimed at the smaller studio, the Klasik uses a seven-inch woofer for the mids and lows, with a lightweight 0.75-inch tweeter taking care of the highs. However, its claimed free-field frequency response of 35Hz to 25kHz (±2dB) is impressive, as is its 103dB SPL rating (111dB peak, per speaker at one metre). 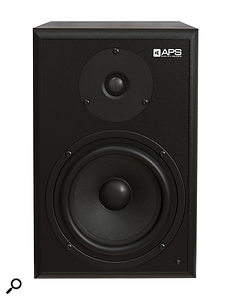 It would be difficult to find much simpler cabinets: these are square-edged, plain boxes, other than a slight rounding on the baffle edges, and the covering is a simple black plastic foil. Both drivers are recessed to sit flush on the baffle, and a discreet green LED shows when the speakers are on. The Klasiks, which measure just 32 x 21 x 28cm and weigh 8.5kg each, are calibrated to work as a matched pair.

Both power amplifiers are analogue Class-A/B designs rated at 75 Watts each, and the crossover is set at 3.3kHz. The woofer has a cellulose cone set in a rubber roll surround; the tweeter has an aluminium diaphragm and is powered by a dual-magnet system. We’re told the woofer employs a sophisticated magnetic system to promote a ‘fast’ response, though there are no technical details as to how this might differ from the norm.

According to APS, the Klasik is designed to have a very smooth response both in amplitude and phase, as well as a highly controlled directional response, courtesy of the tweeter choice (there’s no obvious acoustical means of controlling the directivity, as the tweeter is set into a shallow plate that doesn’t really qualify as a waveguide). 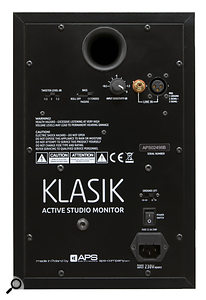 Below the rear port can be found the controls for adjusting the HF and LF response.

Turning to the rear panel, which has no protruding heatsink fins, the circular port is at the top centre of the cabinet and below that is a switched input sensitivity control. This is a practical option as it ensures accurate level matching between the two speakers — variable controls can be a bit hit and miss. The input may either be on balanced XLR or unbalanced phono, but there’s no balanced quarter-inch jack option. Power comes in on an IEC connector, and there are switches for power and ground lift. That leaves just the EQ controls: a tweeter level slide switch offers -1.5, 0 or +1.5 dB optoins, while the bass control has a roll-off position, a centre ‘Passive’ position, which seems to mean equivalent to what you might expect from a passive version, then an Extended position, which appears to be the default. The rolled-off version is useful for checking how mixes might sound on a small playback system. However, there’s no dedicated bass switching to compensate for the speaker position relative to room boundaries.

Testing with a range of material using the default settings reveals that these speakers are capable of presenting a very three-dimensional picture of a mix, with great clarity combined with a bass end that is solid but definitely not over-hyped to the point that it becomes boomy. As with any rear-ported speaker, you need to leave a reasonable space between the speaker and the wall behind.

You can learn a lot about a ported speaker by gently tapping the speaker cone, and in this case, the sound is fairly well damped. I did, however, reset the tweeter switches to their -1.5dB position as I felt that the default setting was rather forward, adding a slightly artificial crispness to the sound. Naturally the ideal setting will vary depending on the room you use, but with the revised setting the speakers sounded much more neutral to my ears.

Though not priced in the esoteric bracket, these are not budget speakers either. However, they hold their own within their price sector, and their vanilla looks belie their strong and detailed performance. Their stereo imaging and sense of depth is nothing short of excellent, as is their ability to reveal detail. Importantly, if a mix has shortcomings, they won’t be backwards in coming forwards to let you know! If you’re on the lookout for a sub-£1000 pair of monitors suitable for a typical project studio room but want something that’s a step up from the usual budget suspects, these are well worth trying.

The more obvious alternatives are the Adams, Eves and Focals of this world, but in reality there are many active two-way speakers that follow this general format across a range of price points.

A good-performing, mid-priced monitor that has the capacity to surprise with its revealing, three-dimensional sound.