Nearly a year and a half after the release of the iPad Air 2, Apple recently unveiled a new 9.7-inch iPad. However, this was not the iPad Air 3, but rather a new member of the iPad Pro family. 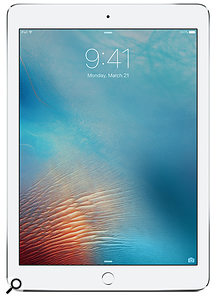 Physically, the 9.7-inch iPad Pro is almost identical to the iPad Air 2, with both devices sharing the same dimensions and weight. The only subtle difference is a less-pronounced chamfer around the bezel, presumably to accommodate the addition of the Smart Connector on the left-hand edge. As with the larger iPad Pro, this is where you can connect a Smart Keyboard accessory designed specifically for the 9.7-inch model, which is available separately for £129$149. And because this is an iPad Pro, it’s compatible with the Apple Pencil, which seemed to work just as fluidly as it did on the 12.9-inch monster, and has a four-speaker sound system that, while you wouldn’t use to produce music, is significantly better than before, both in terms of volume and quality.

The 9.7-inch iPad Pro’s display offers the same 2048 x 1536 resolution as the iPad Air 2, but is apparently 25 percent brighter, 40 percent less reflective, and implements the DCI-P3 colour space (which is used for digital movie projection in the US film industry) to provide 25 percent greater colour saturation. Apple are also debuting an impressive new display technology called True Tone. Thanks to two new ambient light sensors that measure both colour and brightness, True Tone matches the colour temperature of the iPad’s display to suit your surroundings, making the screen behave more like a piece of paper. True Tone is enabled by default, and, frankly, the display looked normal to me when I first started using the device. However, if you disable it (or compare against an iPad Air 2), you’ll notice the display becomes colder with an almost-blue tint — the difference is quite remarkable.

The True Tone display will be especially interesting for those running notation-based apps, whether for editing or simply viewing, since such apps normally have a white (or near-white) background on which the notation is displayed. With True Tone enabled, this can make the page look warmer, as you can see from the photo I took with my iPhone 6S. In this particular instance and environment (my office), the True Tone display is noticeably beige, and it will come down to personal preference whether you leave this feature enabled or not. 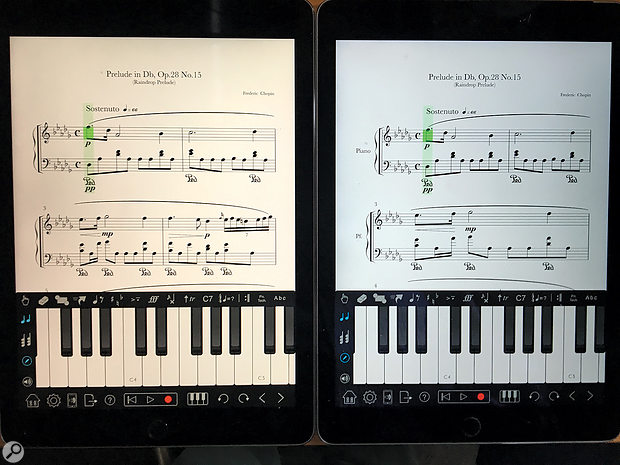 Here you can see the difference between an iPad Pro with a True Tone display (left), and an iPad Air 2 running Notion.

The biggest disappointment with this new iPad Pro’s internals, however, is that it features the same 2GB of memory as the iPad Air 2, instead of the 4GB offered by the larger model. I don’t know whether this decision was made because of technical or pricing limitations (maybe Apple assume users will multitask less because of the smaller display?), but it makes this new smaller iPad Pro slightly less ‘pro’, which is a shame, particularly if you want to run a large number of instrument and effects apps simultaneously.

The storage tiers for the 9.7-inch iPad Pro are the same as for the 12.9-inch model, meaning that the cheapest 9.7-inch iPad Pro comes with a meagre 32GB for £499$599. 128 and 256 GB models are available for £619$749 and £739$899 respectively, with WiFi+Cellular models costing an extra £100$130 over their WiFi-only counterparts. If your budget can stretch to it, I’d recommend the 128GB model, especially if you’re going to be recording audio or installing large, sample-based instrument apps like Korg’s Module.

One good thing about the pricing of the new iPad Pro is that it makes the iPad Air 2, which is still a very capable device, £50$100 cheaper, although Apple have sneakily removed the 128GB model from the line-up. If you already have an iPad Air 2, the new iPad Pro might not be a significant enough step up to warrant an upgrade. However, if you want the latest iPad technology and felt the 12.9-inch beast was simply too big, then aside from the matter of only having 2GB memory, this new iPad Pro is the best iPad Apple have ever made.