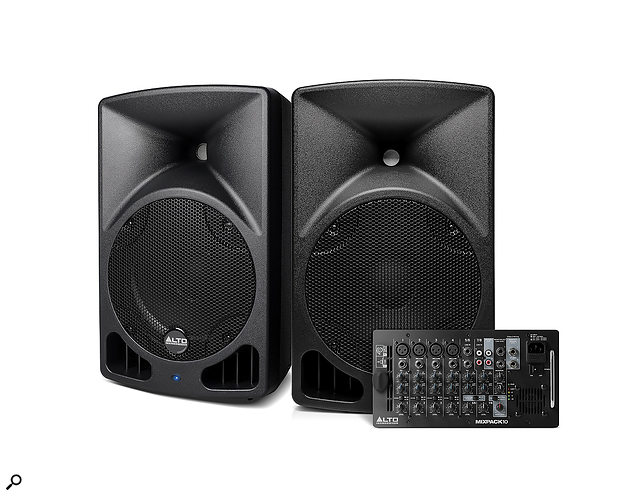 For some gigs, less is more — and that’s where this simple, affordable and portable all-in-one PA system comes in!

If you get involved in any way and at any level with portable live sound, there’s almost certainly going to come a time when you just want something small, light and, above all, simple to use. The MixPack 10 from Alto Professional aims to provide enough functionality to be capable of handling a modest-sized group performance, but in a small, light and easy-to-use format which will appeal to anyone who is in need of a ‘small PA’.

The MixPack 10 is, in essence, a highly portable complete PA system comprising an eight-channel powered stereo mixer (ie. with built-in power amps) and a pair of passive two-way speakers. While the MixPack 10 design focuses on portability, there is enough input-mixing capability and output power to handle more than your usual ‘solo busker’ type all-in-one boxes. I’m sure that this simple little system will be of interest to many potential users who are not regular sound guys (I get more hire enquiries for this type of gear than anything else), so I’ll take a fairly detailed look at the MixPack 10 in terms of its functionality and ease of use.

The MixPack 10 consists of three units — two speakers and a mixer — and is supplied with all the necessary power and speaker cables. The two speakers are, as far as I can tell, identical: they are made of injection-moulded plastic and have a dark grey matte finish, with a metal grille covering the woofer and an integral waveguide moulded into the cabinet for the HF exit. The driver format is standard two-way, with a 10-inch LF unit and a one-inch-exit compression driver (a ‘proper’ one, not a piezo device, which, at this size and price, is a tick in the box for Alto). The crossover point between the drivers is 2.2kHz and, although the HF dispersion (coverage angle) isn’t mentioned in the specification, the coverage seems to be fairly wide so I’m guessing it’s designed to be around a nominal 90 degrees in the horizontal plane.

The speakers are neat and compact, and although they don’t have (or need, for that matter) handles on the sides they do have a ‘top slot’ handle which serves well enough for carrying them around. The speakers are so light, at only 6.8kg apiece, that mounting them on a tripod stand or pole is easy, even at operating height. The moulded enclosures seem sturdy and well-finished, and are equipped with standard 35mm pole-mount sockets on the bottom; they also have what look at first to be potential suspension points but on closer inspection (I removed one of the blanking plugs) are simply holes in the cabinet, presumably intended to be used for threaded inserts on other models which use the same enclosure moulding. The cabinets are shaped with an angled surface so that they can be used as floor monitors, and there’s an obvious setup option for a solo performer to use one speaker channel for the front of house and the other as a wedge monitor — although there are limitations to this, as I’ll described shortly.

The heart of the MixPack 10 system is the mixer itself, which is a very compact unit that is designed to sit inside one of the speakers. To mount the mixer all you do is locate a couple of metal locating tabs at the bottom and secure the top with a large and easily operated rotary latch — it takes about a second, and removal requires only a push-and-turn action which is also easy and quick.

The system can be used with the mixer in place or removed and operated remotely, the only connection to the speakers being a couple of jack-to-jack cables which are supplied in the retail box; there’s also a very short speaker cable supplied for when the mixer is nested inside the cabinet. The MixPack 10’s mixer is very small and light, and is built into a strong, neat and well put-together steel housing. I assume that the MixPack 10 is so-called because of the speaker format, as the mixer has eight input channels: four mono mic/line inputs and two line-level stereo inputs. It’s a simple mixer, but it has all the necessary vital ingredients. The four mono input channels have both XLR (mic) and TRS (line) connectors, and the XLR inputs have a globally switched 48 Volt phantom-power option. Each mono channel has a rotary level control feeding the mix bus, and a two-band EQ circuit that applies up to 15dB of cut or boost centred on fixed frequencies at 12kHz and 80Hz. The EQ seems to suit the system, especially the LF frequency control, which is set at a low enough frequency to avoid too much booming and boxing in the mid-range if it’s turned up (as I suspect it may well end up being) for a fatter sound. The lack of any real mid-range control is something I’d normally worry about, but when you put it in the context of the overall system and what it’s designed to do, I didn’t find it a problem. 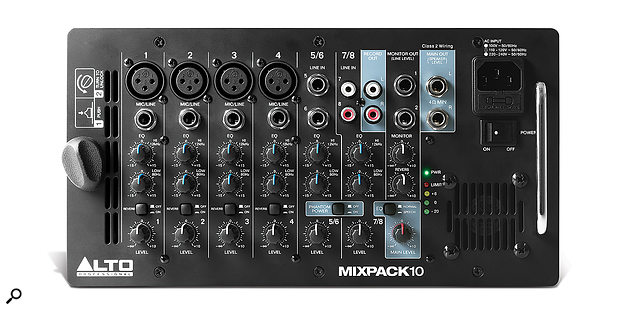 The stereo channels are equipped with TRS sockets (channels 5 and 6) and unbalanced RCA-type phono jacks (channels 7 and 8), and have the same two-band EQ. The input jacks on channels 5/6 can operate in either mono or stereo: if an input is only connected to the left input (5) it will appear on both left and right outputs. None of the mixer channels are provided with any kind of input trim, so you have to be careful not to drive them with too hot an incoming signal. There isn’t a clip warning LED, either, so input level is something that inexperienced users will have to keep an eye (and ear) on.

So, basic mixing is just about as simple as it gets, with no input trim to set up(!) and good old bass and treble controls for the EQ. The output level is indicated by a small LED ladder meter, and so long as the output sounds all right and the red limit segment isn’t glowing, everything should be going well enough. The MixPack 10 provides a ‘monitor mix’ that is a mono sum of the main left and right output buses, at line level, for connecting to a self-powered monitor speaker or another system. The monitor level can be controlled independently of the main output but the mix is always the same; a nice touch here, though, is that the monitor signal appears on two jack outputs. This means that a couple of monitors can be connected without needing to daisy-chain them together, or you can feed two different systems.

In terms of the main mix, none of the mono channels can be panned left or right, so the only stereo in the output will be anything that’s connected to the two stereo input pairs on channels 5 to 8. This isn’t an issue in normal use, but it does impose some limitations if, for example, you wanted to run one speaker output channel as ‘front of house’ and use the other speaker as a monitor: you would (a) get exactly the same mix and level in each speaker, and (b) if a true stereo source were connected you’d get one channel in the main and the other in your monitor. I should point out that the manufacturers don’t suggest using the MixPack 10 in this way, but it seems like an obvious possibility for solo performers in small spaces.

The MixPack 10 has a built-in effects processor, which can be applied to any or all of the four mono input channels; it is simply switched on or off for each (there’s no adjustment for the send level) and is controlled by an overall master level pot. The effect itself is described as ‘reverb’, although to me it sounds more like a delay/echo, and is there should you feel the need... I can think of one regular customer who would dial this in on his mic every time! A button next to the main output level control offers a global EQ setting for speech use, and under some circumstances this can be very useful for removing unwanted frequencies and in effect emphasising the vocal range. This very compact unit houses mixer and power amplifier, and I like the presence of a built-in cooling fan; on occasions where the mixer is used inside the speaker there’s not really any cooling air able to circulate around its casing, so this is a plus point for reliability.

Setting up the MixPack 10 is a breeze, and from opening the car boot to saying ‘one, two’ should take less than five minutes. Provided you don’t try to drive it too hard or expect more output level than it’s comfortably capable of in any given space, it sounds perfectly decent, and there aren’t enough knobs and buttons on it for anyone to get anything horrendously wrong. Set the EQ controls to flat, turn the reverb right down (to begin with), set the main level in the middle, then turn the inputs up one at a time until they are balanced and sound clean, and you’re done. This isn’t designed to rock the foundations of a large venue (the specified maximum output of 113dB SPL at 1m gives some idea) but it’s loud enough for a party PA and more than enough for bars and small venues. I can tell you it works great outdoors for announcements and background music at your local Summer Fair, because I used it twice in this setting. Just out of interest I replaced the original Alto speakers with a couple of other types from my stock, and all things considered, I’d stick with the supplied units as the whole thing is designed to work well as a complete system. I do like the monitor output facility, though, because this is an easy way of upscaling for the odd larger event, still using the same familiar mixer but linking in to a more powerful powered system.

The MixPack 10 is one of the most convenient and easy-to-use portable PA systems I’ve some across, and there’s nothing — apart from possibly overdriving the inputs — to confound even the most inexperienced or infrequent user. The physical format is small, light and very easy to transport, and even the cables can be stowed inside whichever speaker isn’t currently accommodating the mixer unit. With a street price just north of £300 the MixPack 10 has got to be worth a look if bells and whistles aren’t really your thing, and you favour an easy life.

Similar ‘all-in-one’ solutions include the likes of Yamaha’s MSR 250, the Behringer EPS500 and the Superlux SP108.

A neat, simple and cheap sound system that even the most inexperienced musician/engineer can use straight away. Live sound doesn’t get much simpler than this!