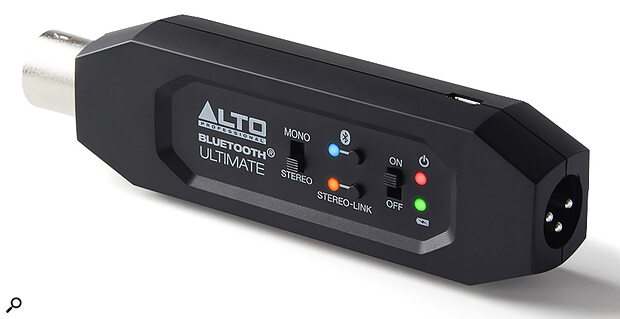 There are plenty of cheap Bluetooth adapters on the market but most are aimed at the consumer sector, whereas these two models from Alto focus on the pro audio market.

Accordingly, as well as offering a decent sound quality, both have male XLR balanced outputs: the Bluetooth Total is a mono device with a single output protruding from the left‑hand side, whereas the Bluetooth Ultimate is a mono/stereo device with two outputs, with the additional connector recessed into the opposite side of the casing. Naturally, the latter costs a touch more but while the former is mono, note that two units (you can mix and match models) can be linked and sync’ed for stereo use. A benefit of this over simply using one Bluetooth Ultimate is that you don’t need cables running between the speakers, which makes it viable to use these devices in locations where the speakers are placed far apart, or trailing cables might be a trip hazard.

Two units can be linked and sync’ed for stereo use.

The devices come in disposable plastic blister packaging, which I don’t like. As well as the ecological considerations, I always seem to cut my fingers opening them — but I can also see people wishing there were some form of reusable protective case for storage and carriage when not in use.

On the top panel the two units are almost identical, the key difference being that the Ultimate adds a two‑position slide switch to select mono or stereo operation. You press and hold a Bluetooth button for three seconds and the device becomes discoverable for pairing (for example with a phone or computer). It emits a recurring beep which can be helpful feedback when setting up, but can also be annoying if you have the speaker/amp levels cranked at the time! 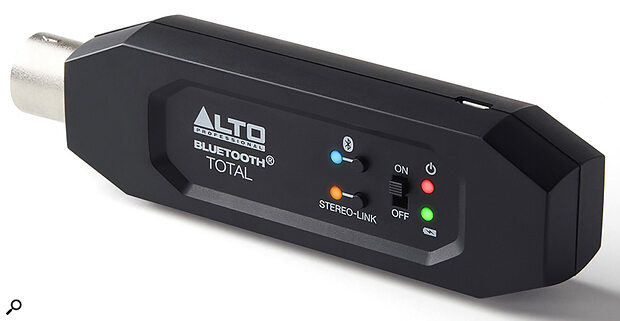 The Stereo Link facility works like the power line Ethernet adapters I’ve used: you press and hold a button on one unit then do the same on the second, and they’ll then pair automatically. The first device is the ‘primary’ unit, which to you and me means the left channel, and if an Ultimate model is used in this role it will output the left signal on both XLRs, just as it does in mono mode. The final ‘control’ is an on‑off slide switch.

Power comes from an internal rechargeable battery that’s capable of six hours’ operation, and is charged using a USB cable which plugs into a mini USB socket on the side panel. The supplied cable is very short, and if you want it permanently plugged in you’ll need a longer one. You’ll need your own mains‑to‑USB adapter; you can charge it from a device’s USB bus but if you want this thing to live permanently on the back of a speaker that’s probably not the best approach. Different LED colour combinations helpfully tell you the present state of charging and battery power levels.

That’s pretty much it. When charged and paired (there was no passcode or anything like that to contend with) it works as expected. There’s no volume control; the paired playback device and your speakers/amp dictate the output level in the room. The conversion sounds as good as I’d hope for from any Bluetooth device, and with a maximum output of +4dBu there’s plenty of level going into the speakers for normal playback of commercial material.

The Bluetooth range seems decent. The spec suggests that this is just over 30m...

The Bluetooth range seems decent. The spec suggests that this is just over 30m, and while the range will inevitably be compromised to some extent where walls or other physical barriers are involved, it passed my go‑outside and wander‑around‑the‑garden tests with flying colours.

As with any Bluetooth system, there is some latency involved. Thus, it’s not brilliant for playing virtual instruments or, say, through guitar amp sims that you have installed on your phone. For regular music playback that’s not a problem, although, as with any Bluetooth system, you’ll encounter sync issues if watching YouTube videos and the like. That’s something I overcame easily enough using a free browser extension (YouTube Audio/Video Sync for Chrome).

Some of the settings will be difficult to see in the dark (eg. behind a speaker in a venue; while the LED indicators are great, the position of the on/off switch and the Ultimate’s mono/stereo one are harder to see. But once set up, you barely need to look anyway.

On the whole, both devices perform well. They sound fine, they’re easy to use, they’re affordable, and I have no real complaints. So I’m happy to recommend them. For the small amount extra, I think I’d opt for a pair of Bluetooth Totals, though no doubt some will prefer the simplicity of the Ultimate (only having to link a single device) if feeding a stereo amp.