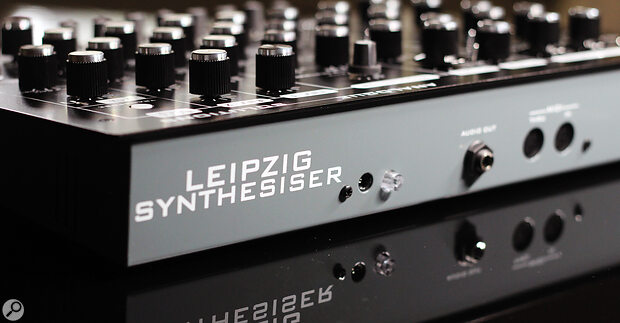 Analogue Solutions have taken a perfectly good synth... and made it better.

Back in May 2012, Paul Nagle asked in his SOS review of Analogue Solutions’ Leipzig‑S if it was the British company’s best synth yet. The twin oscillator mono synth reminded him, he said, of a Moog Rogue, “but a Rogue force‑fed on burgers and lard before being squeezed into a rack.” Tasty. Now Analogue Solutions return with a third synth in the Leipzig dynasty, the V3. Gone are the rack ears, new features have been added and a few modifications have been made under the hood to improve reliability and performance. Conspicuous additions since the Leipzig‑S include a headphone output and a line of 3.5mm inputs and outputs down the left‑hand side, for integration with a modular system or external audio sources.

Longtime Leipziggers will be pleased to know that amid all of this — plot spoiler ahead — it retains that signature filthy Leipzig character, which Analogue Solutions describe accurately as a “wonderful, angry, pure analogue sound”. Or, as Paul wrote with equal accuracy, “a brash bulldozer of a synth.” For Paul to float such an accolade about the Leipzig‑S is noteworthy: Analogue Solutions may not have the corporate clout of some synth companies, but their creations go toe‑to‑toe with even the most ambitious designs from any company in the world. Just look at their Colossus: an astonishing £26,000 12‑oscillator cross between a synth and a piece of furniture, with twin on‑board pin matrixes and two spring reverbs. The Leipzig V3, then, is a synth of considerable pedigree, and this only bolsters its appeal as a compact workhorse of a synth.

Here's an audio example to whet your appetite.

Frills, And The Lack Thereof

It might actually be worth holding the aforementioned Moog Rogue comparison in the back of your mind for this review — that synth, like this one, represents something I respect greatly: a developer’s decision to ditch the frills and create something simple and powerful. Like its predecessor, the Leipzig V3 ditches more frills than most in this respect: it has no screen, no presets, no auto‑tuning, no USB compatibility and no MIDI out. Each oscillator toggles between just two waveforms, saw or pulse‑width‑variable square, there’s a lovely Moog‑inspired ladder filter, a simple modulation matrix, a pair of ADSR envelopes and a VCA. It is, suffice to say, very analogue indeed.

I’ll say at this point that the raw sound of the Leipzig V3’s oscillators are simply a joy to behold. Rich and full of character across their entire pitch range and drivable at high levels (along with the filter) I could achieve anything from deep and clear bass stabs to reedy ’70s fusion jazz leads without so much as touching an envelope or modulation generator. Many of the V3’s circuits are indeed designs dating back to that era, so there is — dare I say it — a sense of authenticity in its sound. The other side of the coin here, of course, is that there are no CPUs on board to stabilise the V3’s circuitry, so the oscillators are naturally prone to drifting, though in this case not badly.

Another all‑analogue quirk concerns note priority: the V3’s signal path prioritises the last note played, but will forget the previous note. In other words, if you hold one note and press another momentarily the VCA will shut when the last note is released. In practice this can mean the V3’s sound can cut out unexpectedly if you happen catch an accidental note while playing, though this is not so much a fault as part of the wondrous territory of a fully analogue signal path.

One frill I could have done with is slightly better build quality on the knobs, which feel a little plasticky and light to turn, unlike the weighty and smooth pots one might expect to find on a synth carrying the V3’s price tag. It’s not just a tactile preference: I’m of the view that heavier knobs make for better parameter control, especially in a live situation, and also tend to last longer. This said, the overall build quality of the V3 can’t really be faulted. Its steel and aluminium chassis is certainly — as manufacturers love to say — ‘rugged’, and judging by the physical heft of the original Leipzig, it’s clearly a fruit of Analogue Solutions’ labour to have compacted it all into such a neat desktop format. 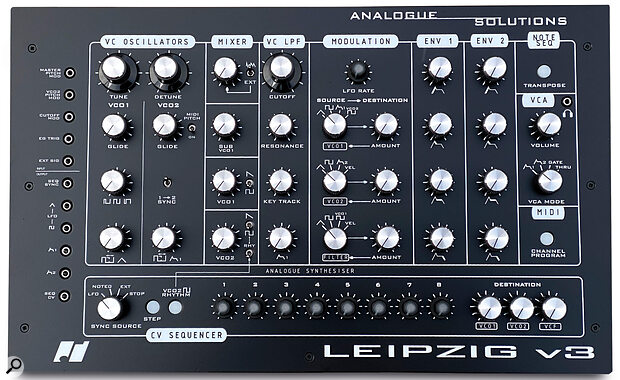 Along with a number of subtle front panel adjustments, the main difference between the Leipzig S and the V3 are the loss of the rack ears and the addition of patch points on the left‑hand side.

It didn’t take me long to deduce that despite appearing rudimentary on first glance, the V3’s circuits have been carefully designed to interact with each other in very interesting and occasionally wonderful ways. VCO 2, for example, can be toggled to hard‑sync to VCO 1, it can be used as a modulation source for some intense FM‑style sounds, or it can do the complete opposite and latch to one pitch regardless of what note messages the synth is receiving. In this instance the Leipzig either becomes a kind of quasi‑paraphonic synth, with a steady note held beneath whatever melody is being played, or it opens up a fixed‑frequency, audio rate modulation source for even more tone shaping. Add some oscillator‑specific modulation into the mix, maybe from an envelope, and all sorts of sonic possibilities present themselves. In the modulation matrix, each oscillator and the filter have a selection of different modulation sources beyond the conventional option of the LFO’s two waveforms, so there’s no shortage of room for creativity.

This sort of thing goes way beyond just the tonal, of course. The Leipzig’s snappy envelope, rasping oscillator drive and miaowing pulse‑width modulation make for a highly capable percussion instrument, aided further by an on‑board noise generator — which can also toggle to receive an incoming external signal and feed it through the V3’s VCA. I found it fairly intuitive to create some very aggressive, industrial‑sounding beats; normally I’d fine‑tune sounds one by one and build a sample bank; while this is always an option, the sheer amount of modulation possibilities on the Leipzig mean that masses of variation can be achieved across one running sequence.

Speaking of which, if there is a function with which the V3 chooses to really push the envelope, it’s the sequencer. Like the Leipzig‑S, the on‑board eight‑step sequencer can be dialled in to influence either of the oscillators or the filter via dedicated knobs, but while the ‑S offered a wide range of sync options, here those have been reduced down to a choice of the LFO as clock, MIDI sync or an external CV clock via the patch panel. No complaint there. Simplicity is bliss. With the three destination knobs turned up it’s a recipe for utter analogue wildness, and compounded with — you guessed it — any of the V3’s other modulation sources it’s a voyage.

A curious feature beneath the sequencer’s tactile eight steps is a ‘hidden’ 16‑step sequencer, which automatically remembers the last 16 notes played manually into the V3 and plays them back when the transport is started — even if all three of the destination knobs are on zero. This, I have to say, could use an off switch. I can imagine plenty of instances where such a function would be a great asset, but it would only increase the usability of the sequencer if it could run with no consequence until one or more of the destination knobs are turned up, as happens with the LFO. It’s not possible, for instance, just to sequence the movement of the filter while manually playing a melody, nor is it particularly easy to program or adjust a melody while the sequencer is running. With the sequencer stopped, however, inputting notes step‑by‑step isn’t too difficult.

For my qualms, I should point out that the V3’s manual encourages users to think of the sequencer as a modulation source that can also be used for simple melodies, and not the other way around. It also really does come alive with an external clock source, in turn freeing up the LFO for further delights. Overall it’s fair to say the sequencer just isn’t designed to be used simultaneously with manual playing or for precise melodies, instead demonstrating a totally different side to this synth and offering something like two instruments in one. It is, as the V3’s manual describes it, ‘the fun bit’. A novel function on the sequencer is the ‘VCO rhythm’ button: another very clever quasi‑paraphonic feature which allows VCO 2 to be ducked from specified steps in the sequence. Simple in theory, but in practice something of a master stroke. You could choose to accentuate certain steps by adding another oscillator, or — with VCO 2 set to modulate VCO 1 — mangle particular steps beyond recognition. You could overlay a simple cross‑rhythm, create dynamic percussive sequences and much more. Excellent stuff.

Leipzig Is Calling You..?

The Leipzig V3 shines not because of how many different circuits it boasts, but because of how it chooses to use those circuits. In this way it is a synth capable of far more than the sum of its parts, pulling no punches in squeezing the most out of its compact footprint and promising almost limitless applicability. With such variety in the analogue synth market nowadays, as well as countless reboots and clones of older models coming out every year, it’s a challenge to make a splash in the monosynth department in 2021. Analogue Solutions have doubled down on the integrity of their Leipzig series, choosing not to add legions of mod cons but instead make careful adjustments with the sole purpose of creating a better instrument that does very well what it is designed to do. In this endeavour they have succeeded.

The Leipzig V3 is a worthy development from the Leipzig‑S, offering a hugely versatile and powerful analogue synth in a compact package.