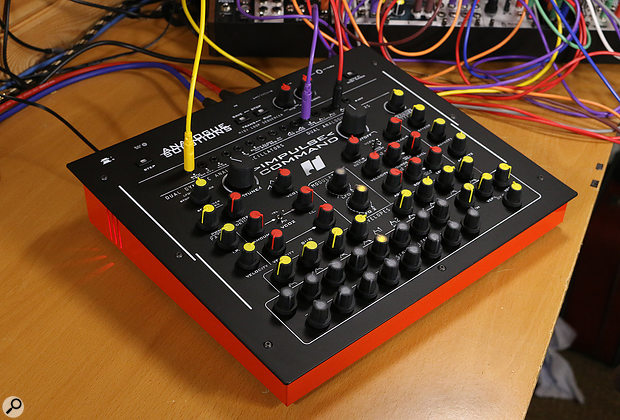 Stuck in a synthesis rut? Tired of patching the same old sounds? Analogue Solutions have got just the thing...

'Thrilling' is a good word to describe my first experience with Analogue Solutions' Impulse Command. It responds to general intuitive knob fiddling with a wide range of sound and a surprising amount of movement. It's fat, fierce and fabulously fizzy. There's a lot going on and the sound field is so full that you start questioning whether this really is just a monosynth.

The Impulse Command is imposing on the desktop. It's in a wedge-like, laid–back console style with a black panel on a red base, where the top is ever-so-slightly wider than the bottom. The layout is a not–quite ordered scattering of red, yellow and glowing pots with two big knobs in prime position that hint at the duality of this synthesizer. And then, just to finish off the impressive physicality, a fan of three light beams spills out on either side from vents laser-cut into the case. This is one solid and inviting piece of synthesizer.

But Analogue Solutions don't want to call it a synthesizer, they prefer the term 'sonic realiser', and now that I've spent some time with the Impulse Command I'm starting to understand where that idea comes from. The Impulse Command is at a basic level a subtractive, semi-modular monophonic analogue synthesizer. But Analogue Solutions designer Tom Carpenter is not content with adding another monosynth to their range or to the crowded monosynth market. Instead Tom has woven a sense of adventure and discovery throughout the device. He's made creative decisions that push you in different and often unexpected directions. And as with any thrill ride, you have to go with it or risk losing limbs.

But first, the facts. The Impulse Command is a dual–oscillator, dual–filter analogue stereo synthesizer with two LFOs and two ADSR envelopes. The first oscillator offers sawtooth, triangle, pulse (with PWM) and noise waveforms. The second oscillator remains resolutely square and you'll also find a square–wave sub-oscillator. There's an analogue and a MIDI sequencer and at the end of the signal chain you'll find some digital effects. Not an unusual combination of features to find in a synthesizer, but perhaps some of the duality is beginning to raise your eyebrows. But it turns out that every section has its own level of surprise and playful weirdness.

The oscillators don't use a traditional form of mixing. The level of VCO 1 is fixed and hard–wired to a VCA controlled by EG 2. VCO 2 and the sub-osc are routed to the same VCA but are dynamically controlled. They have an IL or 'Initial Level' (like that found on the Yamaha CS synths), which acts as a volume knob, but from that point further level is added via MIDI velocity. VCO 2 can also be switched to use EG 1. Both have Amount knobs to dial in how much of this dynamism you want to use. Pulse-width modulation is available on both VCOs but only as a combined control over the intensity of modulation from LFO 2 rather than control over the pulse width itself. Analogue Solutions don't want you to get hung up on details like mixing waveforms or modulating the pulse width, they want to push you into experimentation rather than purposeful parameter placement. That's going to become a bit of a theme with this synth.

The rear panel houses MIDI in and thru ports, three audio outputs, an audio input, and a socket for the external PSU.

To get sound out you either have to connect a MIDI keyboard or an external CV pitch and trigger, or run the internal sequencer on LFO mode, which we'll come to in a minute. It's interesting how the feel of the Impulse Command is different when using a MIDI keyboard rather than a sequence. The MIDI velocity is tied to different parameters and so you get some unexpected and variable tones going on. The MIDI implementation gives it a whole other feel that you don't really experience in the sequencing, so when playing from a keyboard you are rewarded with different tones and unexpected velocity-based modulation.

Bringing up the VCO 2 IL and playing with the Detune knob thickens the sound with a rather unruly beauty. You have about 4-5 notes of play, letting you set up some nice thirds and fourths if you so wish. Bring up the IL on the sub and it treacles out to a golden syrup of sweet, fat synthiness. Add a touch of PWM to the phasing of the oscillators and you are already on to a first-class undulating lead or bass sound. There's always movement in there somewhere, and when you add the second oscillator or sub, it becomes a living thing.

It's in the filter section where the real fun begins. The Impulse Command has 'dual analogue 24dB filters'. These are not two independent filters; this is a dual filter with all sorts of shenanigans going on. There's a single low-pass filter with resonance and a nice big cutoff knob. Then there's a second cutoff that works as an offset relative to the first. The main cutoff (VCF-L) is panned left, the offset (VCF-R) is panned right, and this does very interesting things to the sonic field. Dial the VCF-R a bit forwards or backwards and you get a remarkable separation between the peaks. Rather than simply filtering a sound you are now dealing with the interplay between two filters that have a relationship to each other while acting independently in the stereo field. That's a lot more fun than it sounds and not something you usually get in a filter section.

Although the two peaks sweep together as you sweep the cutoff, they do have independent modulation possibilities. You can choose either envelope or either LFO to modulate each filter independently with control over depth. The filters don't have their own dedicated envelope. Envelope 1 could be controlling the level of oscillator 2 as well as either filter. Envelope 2 is always controlling the VCA of the oscillators but can also act on the filters. As much as you may like to separate Impulse Command out into separate processes it just keeps weaving things back together again.

There's no CV or modulation control over the resonance — if you want to mess with that then you'll have to get your fingers in there — and there's no boost to compensate for the drop as you push it up. There's a switch for flipping the modulation on VCF-L that gives you a whole other bunch of possibilities. You can also introduce some MIDI velocity on top of whatever modulation you're using so far.

And then there's the Aggro knob. This knob adds cross modulation from the second oscillator to the filter cutoff. It brings in an edgy sync/FM style sound that you can really push with the peak (resonance) knob.

The Impulse Command is a rollercoaster journey of discovery in a fat, oozing wedge of a synthesizer

To this feast of filter modulation we can add one more course — the sequencer. Or rather the 'Sequercizer' as Analogue Solutions have decided to call it. At the bottom of the synth are two rows of eight knobs, slightly offset, with glowing caps like those found on their Generator sequencer. This is designed to mess about with the filter cutoffs. It can do pitch if you wish but it's not normalised. There's a CV out send knob and you could patch the corresponding output back into the oscillator, but really this is all about the modulation. You can choose how much the Sequercizer impacts each filter separately and this is what starts building the impression that this is much more than a monosynth.

The Sequercizer can be driven internally by LFO 2 or via MIDI or a CV clock input, and although it's not patched to the pitch of the oscillators it is patched to the gate and so when you set it going you're getting a pulsed single–note sequence whether you want it or not. You can then use a MIDI controller keyboard or external CV to transpose the pitch. Extending the release on EG 2 gives a good approximation of a rather delicious–sounding drone while the steps modulate the filter. Apply a snappy envelope from EG 1 to the VCF-L and a slow-moving oscillation from LFO 1 to VCF-R and you've got a host of modulation and movement pulling melodies out of those filters.

But the Sequercizer has one more trick up its sleeve and that's the Reorder knob. As we've seen in the Fusebox and the Generator, Analogue Solutions like their creative pattern generation. The Reorder knob selects an alternative pattern for the steps. These are not randomly generated, they are purposeful and designed to be musical. There's a bunch of options in here, from running every fourth step to seemingly random but repeating patterns, all the way to reverse. They seem to follow from the current step rather than resetting from step 1. It's a load of fun to play with and is a great way to add some unexpected interest to a sequence that's been running for a while.