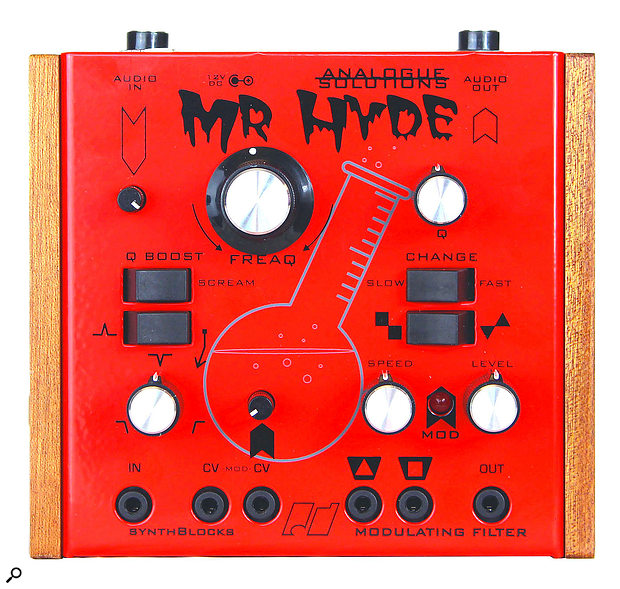 With over 20 years of experience of and specialisation in their design and build, Analogue Solutions have built a high reputation for their range of analogue synthesizers, sequencers and Eurorack modules, all of which are designed, engineered and hand-built in England. The company’s products feature all-analogue signal paths and analogue envelope generators and low-frequency oscillators, giving them a sound character that reflects founder Tom Carpenter’s passion for vintage analogue synthesizers.

The Mr Hyde and Dr Strangelove analogue signal processors are the first two products in Analogue Solutions’ new compact desktop SynthBlock range. This range of products is designed to meet the needs not only of computer-based musicians who use (or would like to use) analogue hardware to process their sounds in real time, but also of those who work with analogue synthesizers, modular or desktop, with control voltage (CV) inputs and outputs. SynthBlocks can be used to process any line-level audio signal in the analogue domain, be it from your DAW interface, mixer aux bus or (with preamplification where necessary) from a guitar, synth or keyboard. Both the audio and modulation voltage paths of multiple SynthBlocks can be linked together to build interlinked processing pathways. Power to both units comes from external universal-voltage wall-wart power supplies with non-locking connectors.

Mr Hyde is an analogue effects unit that is built around a multi-mode voltage-controlled filter (VCF) and a low-frequency oscillator (LFO). Its red-painted, steel enclosure is set off by wooden end cheeks and black legending. Audio connection comes courtesy of quarter-inch jack sockets on the rear panel, both which are matched and paralleled on the front edge of the front panel by 3.5mm mini-jacks — input on the left and output on the right. An Audio In level control is provided to allow attenuation of the incoming signal if necessary.

Mr Hyde’s 12dB-per-octave VCF can be switched between band-pass operation and a second mode where a rotary potentiometer crossfades from high-pass through notching to low-pass response. The filter’s cutoff frequency is controlled by the largest knob on the front panel, labelled Freaq, and can also be modulated by an incoming control voltage on its two CV Mod 3.5mm input jacks, one of which is equipped with a level control. The level of filter resonance is determined by the position of the smaller Q knob to the right of the Freaq control and the Q Boost switch at its Scream setting enables the filter self-oscillation at its resonant frequency that we all know and love — or at least I do!

The LFO section is equipped with Level and Speed controls, between which sits a red LED that pulses to indicate LFO speed. The LFO can be switched between square and triangular (sawtooth) waveforms, and a second switch increase the modulation speed from Slow, the home of typical low-frequency sweeps, to Fast, where the oscillator can reach audio frequencies, enabling you to create some interesting frequency-modulation effects or, as the Analogue Solutions web site puts it, “mangled FM mayhem”. Two 3.5mm jacks, one carrying the square wave and the other the sawtooth wave, are provided to allow you to patch the LFO output onwards to other modular and analogue synthesizers. 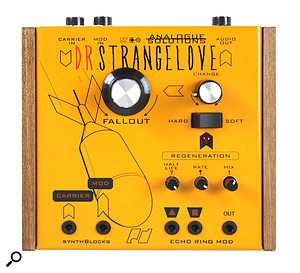 A combination of LFO-equipped analogue ring modulator and lo-fi echo, Dr Strangelove is capable of modulation effects ranging from the subtle to the extreme. The unit’s yellow-painted enclosure, with the inevitable A-bomb graphic, is dimensionally identical to that of Mr Hyde, and also features the signature SynthBlocks wooden end cheeks.

Dr Strangelove’s rear-panel quarter-inch jacks for the carrier and modulator signal inputs and the audio output are duplicated on 3.5mm jacks on the front panel. As with Mr Hyde, the LFO sawtooth and square waves are also made available on 3.5mm jacks for onwards connection. Unlike Mr Hyde, there is no input attenuation, so you will need to take care of both signals’ levels earlier in your signal chain.

In the absence of a signal being plugged into the rear panel Mod In switching jack, the on-board LFO — which can get into audio frequencies — acts as the modulation source, with the larger Fallout knob controlling its rate, the Change rotary pot varying its depth and a Hard/Soft switch selecting either square or sawtooth waveforms respectively. As in Mr Hyde, a pulsating red LED provides a visual indication of LFO speed. Since the front-panel Mod mini-jack is unswitched, the incoming signal and the on-board LFO will interact to provide the modulation signal. Should you want only the mini-jack Mod signal to act as the modulation source, you will have to plug an open-circuit quarter-inch jack into the rear-panel Mod In socket, which seems to be a slightly odd way of saving the cost of a switch.

In Use: Mr Hyde

As far as I’m concerned, in the right artistic context there are very few sounds that cannot be improved by the judicious application of a carefully crafted real-time manual filter sweep, and Mr Hyde, whose filter, to my ears, is more ARP or Oberheim than Moog in character, is certainly more than up for that task. In low-pass mode with resonance at minimum, it delivers warmth and depth and the tonal picture fills out smoothly as you wind the cutoff point upwards with the Freaq control. Taking the same track in high-pass mode progressively thins out the bottom end until you’re left with just the glassy knife-edge of the high treble frequencies. In comparison to its high- and low-pass partners, the notch setting seemed relatively gentle, but although I’d personally have preferred a deeper notch to allow it to make its presence felt a bit more, this filter was at its most effective on audio with a wide and consistent frequency spectrum. Band-pass operation was very effective on similar material, and also proved useful when emphasis on a defined frequency range was required.

Increasing the filter resonance with the Q control not only emphasises the definition of the selected frequency area at lower resonance levels but also, as the level increases, introduces the singing, slightly bite-y, harmonically emphasised edge that, to me, is what filter sweeps are all about. Switching in Scream, the appropriately named resonance boost, enables the filter to go into self-oscillation. However, this only happens right at the upper end of the travel of the Q control and comes in so quickly that self-oscillation becomes more or less an on/off function, resulting in an abrupt increase in level, so initial experiments should be conducted a lower volume levels to avoid sudden shock.

At its lower rates, Mr Hyde’s LFO can produce automated filter sweeps with square and triangular profiles, should these be required. However, modulating a self-oscillating filter frequency with high-rate, audio-frequency LFO settings does produce satisfyingly incoherent, FM synthesis-type sounds. Although there is no way to synchronise Mr Hyde’s LFO from an external source, the CV inputs do allow external control of the filter cutoff from a LFO, envelope generator or any other CV-equipped controller.

The two functions that I missed when working with Mr Hyde as a stand-alone effects unit were an envelope generator to allow real-time modulation of the filter cutoff frequency by the incoming signal — which is especially useful when processing guitar sounds — and a bypass switch. However, in its role as a SynthBlock, a suitable envelope generator output is available on Analogue Solutions’ newly released Treadstone single-oscillator synthesizer, and a simple A/B switch could be utilised as a hard bypass if that function became essential in stand-alone operation.

In Use: Dr Strangelove 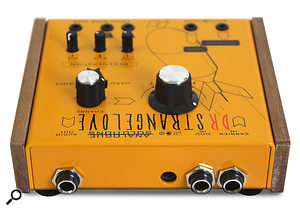 The Dr Strangelove’s back panel hosts quarter-inch inputs for mod and carrier signals and an audio output. All three are reproduced on the front panel as Eurorack-friendly 3.5mm sockets.To me, part of the attraction of Dr Strangelove’s ring modulation is its simplicity of operation. Plug an audio signal into the Carrier input, use Dr Strangelove’s own LFO as the modulation source and you’re away. With the Fallout knob controlling the modulation frequency and Change doing the same for its depth, creating a sound is simply a case of picking a waveform — the hard-edged square or the gentler sawtooth — and juggling speed and depth until you find something that appeals to you. At the less speedy LFO settings (they’re not exactly slow), the output sounds like a fast guitar amp tremolo, but as the LFO frequency gets into audio territory the classic, somewhat metallic ring-modulation effect comes to the fore as the two ‘sum and difference’ frequencies replace the original audio (carrier) signal.

Since a ring modulator obliterates the original audio carrier signal, a wet/dry mix control would have been advantageous for stand-alone use in order to mix the right amount of effect into the original signal, be that guitar, drums, vocal or any other instrument. One minor anomaly, which isn’t an issue when the ring modulator is in full cry, is that the modulation signal (from whichever source) can be heard at the output when no carrier signal is present. As with Mr Hyde, a bypass switch would be useful for stand-alone operation. Having said all that, the lo-fi echo is a complete joy — as long as you’re a fan of old-school bucket-brigade type delay sounds... and I am! Adding its echoes using the dedicated Mix control does add depth and movement to the ring-modulated sounds. At shorter delay times and higher feedback levels you can further manipulate the ring-modulated harmonics and, at the right frequencies, add in another ‘ring-modulated’ tonality. A most excellent facility, even if its Half Life and Rate labelling is a bit counter-intuitive at first.

Although both Mr Hyde and Dr Strangelove have a lot going for them, both lack the bypass function essential for use as stand-alone effects units, which means that they really do need to sit in an effects loop unless they’re being integrated into either a modular or SynthBlocks synthesizer setup. All in all, however, both produce the kind of sound that anyone who appreciates analogue synthesizers is going to want to hear.

If you’re an instrumentalist or vocalist who enjoys manipulating the sound of your instrument or voice after you’ve recorded it, then you’ll find a lot of opportunity to do so in either or both of these two pedals. If you’re into modular synths or if you’ve got older CV-equipped synths whose sounds could do with a bit of TLC from an external VCF or a ring modulator, then you also should check out what Mr Hyde and Dr Strangelove can do.

Although there is a price penalty to pay in comparison to their mass-produced competitors, simply because Mr Hyde and Dr Strangelove are hand-built, boutique units, their unique and slightly quirky nature does compensate to a large extent for that disadvantage. If you’re in need of these kinds of effects, you really should audition them both.

Finally, the origin of the term ‘ring modulator’ comes from the circuit diagram layout of early designs, in which a passive four-diode ring was used to change the polarity of the carrier signal in line with the polarity of the modulation signal. Strictly speaking, modern devices that use integrated circuits and other active components to achieve the same results aren’t actually ring modulators (the lack of a diode ring is a dead giveaway), but the name has stuck.

Two unique and slightly quirky hand-built analogue effects units from one of England’s most renowned synthesizer designers and builders, Mr Hyde and Dr Strangelove not only bring to the party, respectively, a voltage controlled filter and a ring modulator, but also are core components of Analogue Solution’s new SynthBlocks concept.