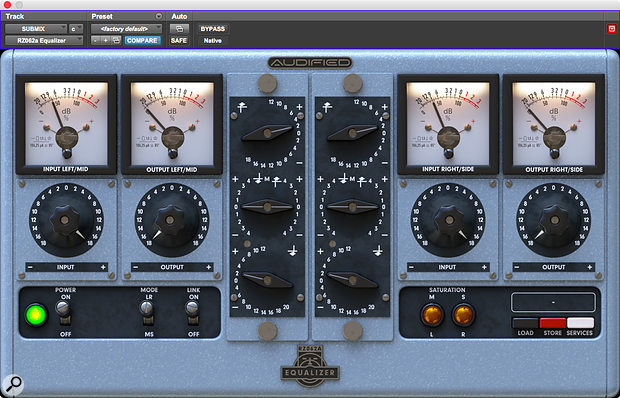 I have heard it said in some quarters that “all EQs sound the same”; or, less boldy, that “all digital EQs sound the same”. If you know anyone who has ever uttered this statement, march them to the Audified web site and have them download a demo of RZ062, because it is quite unlike any other equaliser I’ve ever encountered.

RZ062 is a faithful recreation of a valve EQ that was made by Siemens in the 1950s — or rather, of two different valve EQs, because Audified have modelled both ‘A’ and ‘B’ versions of this processor as separate plug-ins. The original was part of the Klangfilm system, a console designed for film mixing which was built to the highest standards of the day. If you’re lucky enough to find a hardware Klangfilm EQ for sale, it will probably set you back a five-figure sum. Audified’s plug-in version is, obviously, rather more affordable, and it also incorporates refinements such as input and output gain controls, stereo linking, presets, and an optional Mid-Sides matrix, helping to fit it for a new role in the digital age.

Both the ‘A’ and the ‘B’ versions of the plug-in offer three EQ bands, and the outer two are the same in both cases. Both cover a single fixed frequency range, and they could perhaps be described as low and high shelving EQs, as long as you understand “low” to mean “everything below 1kHz” and “high” to mean “everything else”! Each band has a single control which is stepped in 2dB increments, permitting a maximum of 12dB boost, with 18dB attenuation available in the high band and 20dB in the low band. 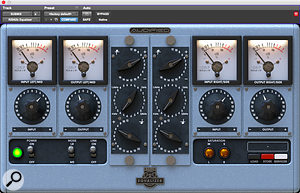 Where the two plug-ins differ is in the central band. In both cases, what’s on offer is rather unusual by today’s standards. On the RZ062A plug-in, the central dial operates as a ‘tilt EQ’, applying a slope to the frequency response centred at 650Hz. Boost above this point is mirrored by attenuation below it, and vice versa. The RZ062B’s central control is even stranger. In essence, it controls a single band of mid-frequency boost, but does so using a single stepped knob that simultaneously sets the frequency and the gain. In other words, each of the 28 positions selects a combination of seven gain settings, in 0.8dB increments, and four frequency settings, these being 1.4, 2, 2.8 and 4 kHz.

The aforementioned input and output gain controls are also important for getting the most from these plug-ins, because they allow you to drive the modelled valve circuitry to achieve your chosen degree of coloration. Funky orange lamps labelled Saturation illuminate when you get into the realms of significant harmonic distortion, and things can get pretty crispy when pushed really hard, but only if you make the deliberate choice to do so.

The natural role for the RZ062 plug-in is on the master bus, partly because it is only suited to broad-brush tonal adjustments and partly because it introduces a serious CPU hit. The former, however, totally justify the latter! The sonic impact of RZ062 is obvious even with all the EQ bands set to zero, and this really is one of those equalisers that you might well choose to use completely flat just for the pleasing non-linearities it introduces.

The actual equalisation is even better, especially in the ‘A’ version. One of my first steps in starting any mix is usually to introduce some master bus EQ to get the raw balance into the right sonic area, and that almost invariably means a broad treble lift extending down into the mid-range. Which, in somewhat different flavours, is precisely what you get from the treble and the tilt bands in RZ062A. A click or two on either dial seems to give almost any mix an instant kick up the backside that leaves it significantly further along the road towards sounding finished. No, there’s no choice about the corner frequencies, but if one of them doesn’t work, the other one usually does. My only real complaint is that it gets addictive, and that as even a 2dB boost makes a fairly radical difference to the sound, it’s easy to go too far. It would be useful if the treble band could be adjusted in 1dB increments, though as it is, even cranking it all the way to +12dB rarely sounds bad — it’s just a bit out of kilter with the mixes everyone else is producing! RZ062 isn’t perfect for every mix, but in a very short space of time, it’s become the master bus EQ that I turn to first of all. Highly recommended.