A number of companies offer single‑knob compressors, in which parameters such as attack, release and ratio either are preset or adapt to the incoming programme material. Audified’s VocalMint Compressor is one such plug‑in. It comes in VST, VST3, AU and AAX formats and supports Windows (7 or higher, 32/64‑bit) and Mac OS 10.9 to 10.15 (64‑bit). Though there’s only one main user control, the audio path comprises a serial chain of three different types of compressor, and multiple behind‑the‑scenes parameters have been optimised specifically for vocal processing. 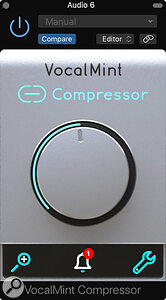 First in line is a stage based on Audified’s Smash compressor, which has been used before in the company’s ToneSpot series of plug‑ins. Based on a FET design (like the famous UREI 1176), Smash is designed to tame peaks and to perform signal levelling using fairly fast attack and release times, combined with a modest compression ratio.

The second stage is based on Audified’s u73b plug‑in, a model of a Telefunken valve‑based device. This is set up with slower time constants and this stage seems to do most of the heavy lifting in terms of compressing the overall dynamic range. It also adds some tube‑like coloration and a very subtle EQ to the sound.

Stage three provides multiband upwards/downwards compression, plus a little more subtle EQ. Here, the time constants are set differently for each of the three frequency bands so as to enhance the definition and crispiness of the voice. This can be very useful, since heavy compression can often soften a voice more than we’d like.

The main parameter that the user can control is the amount of compression, which is what that single knob does; presumably the thresholds and gains of the various compressor stages are tweaked behind the scenes. Click on the spanner icon, though, and you will find a couple of other settings. By adjusting the dBU/dBFS calibration, you can set the amplitude at which the compression becomes more pronounced. There’s also a zoom control for adjusting the size of the GUI and the option of oversampling, which produces a slightly higher audio quality at the expense of demanding more from your computer’s CPU.

For the user who is less experienced with setting multiple compressor parameters, VocalMint is arguably a much safer bet than trying to juggle the controls of three different compressors and I have to say that it does a pretty solid job. While I’d never claim that a perfect one‑size‑fits‑all compressor solution exists for vocals, if you want something really simple to operate then VocalMint manages to make decently recorded vocals sound more even in level, yet also somehow more solid. At higher settings it also helps with clarity and projection, but without ever straying into harshness territory. Even when maxed out, it doesn’t sound too overdone, and though I’d have liked to see some form of gain reduction metering, letting your ears decide the right compression amount seems to work perfectly well. The overall level stays nominally the same as you turn the knob too, so you won’t get fooled by the ‘louder is better’ illusion. There’s also a free demo version, so you can try before you buy.