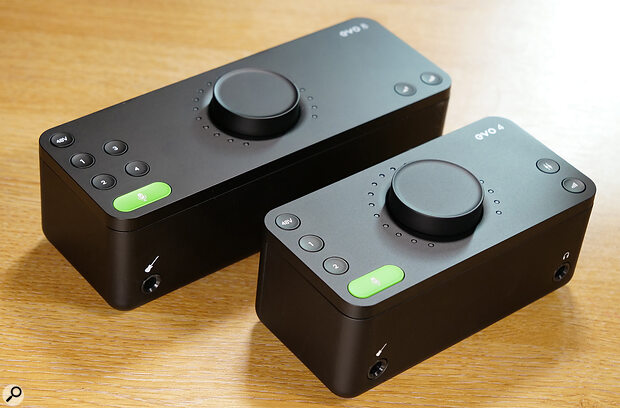 Are Audient’s minimalist EVOs smarter than the average audio interface?

The EVO 4 and EVO 8 are a bit different. They give off a hi‑fi vibe rather than the usual 1U pro‑audio feel of the majority of audio interfaces. They are almost faceless with just that one single large knob on the top and no other gain or volume controls protruding from any other side. The buttons and connectors are all set flush to their surface and the buttons glow dimly white on a cool black background that seems to fall into its own dark aesthetic. The cool effect is only slightly ruined by the large bright green button with the microphone icon that annoyingly disrupts the otherwise perfect first impression.

Ignoring the disruption, you rotate the central knob with your fingers, feeling the soft clicks while being dazzled by the stunning illuminations of the ring of white LEDs that vanish after a pause, leaving you again in the very cool darkness trying to ignore the distracting green button.

The boxes have a reasonable heft to them and I had no concerns about them being dragged off the desk when cabled up. They are made of plastic with a slightly textured matt finish which feels reasonably premium until you give it a squeeze, when you find a surprising amount of give. Just gripping the EVO 4 reasonably tightly I found the front would unclip and have to be clicked back into place. It doesn’t compare that well to the rigidity of the plastic of the Komplete Audio 1/2/6 or the cool confidence of the metal‑cased MOTU M2/M4. The EVOs are certainly not going to fall apart, but you don’t feel they are going to survive much of a adrop either. 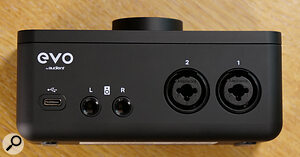 The EVO 4’s back panel is similar but with half the I/O count of the 8.The EVO 4 is a two‑channel in/out audio interface. The microphone inputs on the back are combi jacks and will take XLR microphone and regular jack inputs at line level. For guitar, a Hi‑Z input is located on the front, and routes to channel 1. This is run by JFET transistor technology for some added tone. The EVO 8 is the same, just with an extra pair of combi inputs, which it stretches to accommodate an additional pair of line‑level outputs plus a second headphone output. The EVO 8 comes with a USB‑C cable which allows it to pull in 48V phantom power over USB to run all four microphone inputs, although if you use a USB‑C to USB‑A cable or adapter it will only be able to power two inputs over bus powering. The EVO 4 comes with the USB‑C to USB‑A cable as it only has the two microphone inputs to power.

The EVO 8’s back panel features four combi jack inputs and four quarter‑inch audio outs.The big green button invokes the Smartgain feature where the EVO automatically sets the ‘perfect’ gain for your microphone inputs. Hit the button, select the inputs, hit the button again and then play for a bit so that the Smartgain can work its magic. You can also set the gain manually, but with Smartgain doing things perfectly one would wonder why you’d have to. We’ll check this out in a moment.

On the output side there’s some handy auto‑muting going on when you plug in the headphones. That can be very useful if you’re recording in the same room as the interface but less useful in a larger setup where you might have a musician plugged in on headphones in another room while you are monitoring on speakers. But the first scenario is frankly more likely and is a convenience that I wish was a possibility on other interfaces. It would be nice to have the option to disable it.

A couple of less obvious features are that you can mute the microphone inputs by briefly holding their button and you can stereo‑link 1&2 or 3&4 by pressing them together. These simple front panel controls are really welcome.

The downside of the minimalist design is that you can’t see at a glance what anything is set to. You don’t know what the gain of input 1 is without selecting it and then the lovely ring of LEDs shows you. So, while many elements of your regular audio interface workflow have been innovatively improved, they are at the cost of a ‘glance‑able’ overview. 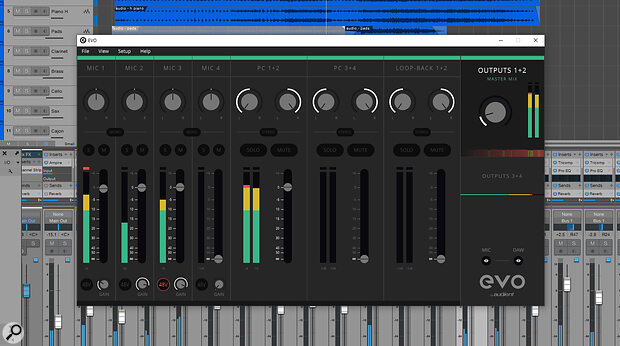 The EVO software mixer follows the same minimalist look as the hardware, but offers a lot more information about the settings.

For monitoring and mixing on your computer you get a rather nice mixer application. It’s very clear, unfussy and gives you software controls over the hardware elements. You can set direct monitoring levels for all the inputs if you want to bypass your recording software. It animates nicely and I guess this is where you could get your glanceable overview. On the EVO 8 you can enable an ‘Artists’ Mix’ where you can create a different monitoring mix for each set of headphones. One quirk I found was that if the EVO is set as your default device on your computer then the main knob actually gets its hooks into the system volume level and controls that rather than the volume of itself. Is this important? I’m not sure because the resultant control over volume is the same whether it’s done in the OS or the box, but it’s interesting, nonetheless.

With the increased interest in podcasting and live streaming, it’s great to see a Loopback function in the mixer. This allows you to route the output of your DAW software back into Facebook, YouTube or another piece of software like OBS or Vmix for streaming or into another DAW along with external instruments for live recording, and many other possibilities. This should be a standard feature on every audio interface.

The focus of the EVO interfaces is on ease‑of‑use, so it’s time to plug some things in and see how quickly you can get recording. It’s the absence of things that really helps with the overall sense of simplicity. The fact that you’re not faced with lots of knobs and connections gives it a nice air of calm. The microphone connections are all on the back, which seems counter‑intuitive when all other interfaces put theirs on the front. But actually, the size and shape of the EVOs tends to make you pick them up to plug things in, so the location of sockets doesn’t really matter. Also, cabling at the back makes it easier to leave microphones plugged in without cables trailing over your desktop, although more difficult to plug things in temporarily — and we find ourselves in a forever discussed desktop interface debate.

Once you’re all plugged in then all you have is the nice big knob and the green button. Setting levels is easy enough. Select the input you want to control and turn the knob to the desired level. What that level is is difficult to say without referring to the software mixer. As you turn the knob the halo of LEDs gives the gain position, but a moment after you stop turning the LEDs become a level indicator. You can press the channel button again to flash up the current gain setting. The white halo of lights has no peak indicator; instead, the lit channel button will glow faintly red, which is at least something. Setting multiple levels becomes a repetitive task of pressing buttons and turning the knob and then going back to compare. While the single‑indicator‑with‑multiple‑functions approach isn’t that troublesome, it’s not as immediate as the signal indicators and knobs positions of other interfaces.

With the Smartgain mode, Audient have managed to find an innovative and useful feature in a very crowded marketplace.

This is where the green button comes in. Smartgain mode is the EVO’s built‑in sound engineer and it’s quite brilliant. Press the green button, select the input channels you want to set and press the green button again. The mic icon will flash orange and the LEDs will dance while you sing and play a 10‑second soundcheck. Smartgain mode will analyse your inputs and invariably set the right gain for each of them. It’s excellent. I’ve no complaints and I’ve tried different microphones, guitars and line‑level sources. You can watch the EVO trying out different settings in the software mixer and play a game to force the gain down by shouting into the mic. Even when plugging an electric guitar in the front after having that channel set up for a condenser mic, all you need to do is run Smartgain again and you’re set.

I won’t ever need to set a level manually again, which neatly eliminates all of my user interface criticisms. Smartgain appears to be aiming for ‑12dB, which is going to work in any situation. Of course, you can make your own adjustments if you wish but I don’t think the majority of users would need to, unless you’re really bad at soundchecks.

The EVO’s specifications match up very favourably to similarly priced audio interfaces. They have a dynamic range of 115dB, signal‑to‑noise of 100dB and can record up to 24‑bit at 96kHz. For comparison I ran it alongside my current top‑of‑the‑heap audio interface around this level; the MOTU M4. The recording quality overall was excellent, living up to the dynamic range and very low noise specifications. In A/B tests with the M4 I couldn’t tell them apart, which is good news for the EVO. The JFET guitar input sounded great but it was no warmer or rosier than the Hi‑Z input on the MOTU, as far as I could tell.

The latency performance was also excellent, going all the way down to a couple of milliseconds at 16 samples without any hint of a struggle, glitch or pop. At these levels software instruments become completely playable and software monitoring felt comfortable. Audient actually publish the latency figures on their website, and I found them to be reasonably accurate with no secret vanity buffers hiding in the background.

The EVO 4 is a great little lump of an audio interface with decent audio quality and performance and is perfect for the solo home recordist. The EVO 8 gives it a bit of gravitas, feels more robust and expands the connections so that two or more people could comfortably collaborate. With the Smartgain mode, Audient have managed to find an innovative and useful feature in a very crowded marketplace. It will definitely appeal to people wanting a simple route to recording that will work more reliably than most manual gain knob fiddling. If you embrace Smartgain then the single knob interface becomes less taxing and more elegant. The software mixer is excellent and nicely fills in all the gaps in the hardware interface. It also has a nice little scrolling display graph that shows the recent output levels, allowing you to spot peaks. It lacks MIDI and an on/off switch, but otherwise is a capable, useful and stylish choice.

The EVO 4 and 8 are minimalist in design but powerful in operation, and offer great audio performance and quality. Smartgain — the EVOs’ auto‑gain function — will get you recording quickly without any mess or fuss.