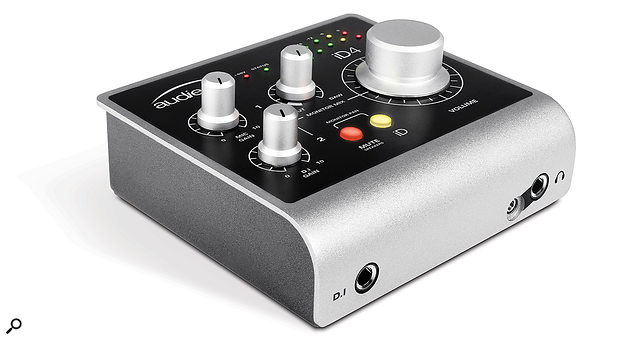 The new iD4 is the smallest and least complex member of Audient’s iD range of USB computer audio interfaces. In keeping with the needs of its intended user — the solo musician recording at home or on the road to an iOS tablet or phone and/or Mac or Windows computer — the iD4’s form factor has been pared back to deliver a chunky, compact unit with a distinct air of quality about it.

The iD4 features two separate inputs: one mic/line input on a combination XLR/jack connector with switchable 48V phantom power, and a J-FET-based instrument DI input, each with an individual gain control. The rest of the I/O is made up of a headphone output on TRS jacks — mini and quarter-inch — and a pair of TRS jack loudspeaker outputs. 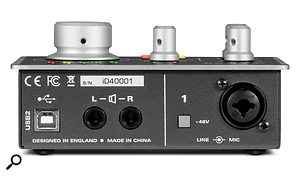 The iD4’s rear panel features a USB port, quarter-inch audio outputs, a switch for the 48V phantom power and a combo jack/XLR socket.Other than the input gains, all other front-panel functions are handled by a Monitor Mix knob that blends Input signals with the DAW return, two push buttons that illuminate when active, a volume encoder that incorporates a latching push-switch, and twin five-LED curved ladder meters.

Connecting up the iD4 is as simple as plugging its USB cable into your chosen computing device — as long as you’re a Mac user running OS 10.7.5 (Lion) or above, that is. If you’re on an iOS device, you’ll need to be running iOS 6 or above and be in possession of a Camera Connection Kit and a USB 2 powered hub, which might make mobile recording a bit of a challenge.

Although the iD4 is class-compliant with Mac OS, the same can’t be said for Windows 7 or later, so you’re into downloading and installing the iD drivers. The driver installation process also installs the iD4 app, which allows you to set the iD4’s sample rate, buffer size and latency.

The PDF download of the full manual has all you need to know about setting up the iD4 with the various operating systems and integrating it with DAW software, and gives specific instructions for Logic Pro, Pro Tools, Cubase/Nuendo and Ableton Live.

The iD4 has a couple of unique (to me at any rate) aspects to its operation. The Monitor Mix control is one such, not only blending input and DAW return signals, but also switching the LED ladders to display input levels when you’re listening to 100 percent input. There’s also a Monitor Pan function, accessed by pressing the illuminated Mute and iD push-buttons simultaneously, and controlled by the Volume encoder, which allows you to create a stereo mix of the input signals. Pressing the iD button turns the Volume encoder into a mouse scroll wheel. Pushing the volume encoder dims the speaker output by 15dB, and causes the Mute switch to flash so that you know you’ve done it.

My feeling is that Audient have got the balance between functionality, usability and form factor right for the situation in which they envisage the iD4 being used. Most importantly, however, the performance of the single classic Audient Class-A microphone preamplifier is exemplary, and the J-FET instrument DI can add a pleasing touch of body and warmth when pushed.

Alongside it being an ideal audio interface for a solo singer/instrumentalist, I could easily see myself using the iD4 for those occasions where I don’t want to fire up the entire studio just to get an idea down before inspiration disappears. Nice one, Audient!

A compact, high-performance, two input USB audio interface that packs in all the essential functionality required by the solo musician recording on a computer or iOS device, at home or on the road.