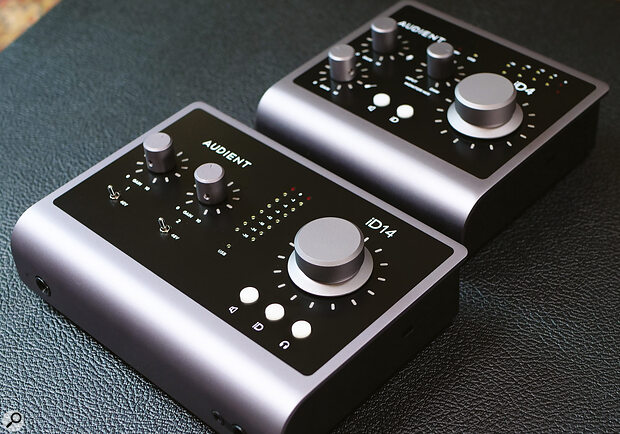 Audient’s budget‑friendly interfaces get a welcome update and a new look.

The iD4 and iD14 were Audient’s entry into the crowded budget end of audio interfaces. The iD4 offers two‑in and two‑out, whereas the iD14 makes up the numbers with two inputs, four outputs and an optical port for potentially another eight inputs. Audient thought it was time for a refresh, and in this review we’re checking out the new MkII versions.

Straight out of the box these are smart‑looking devices. The all‑metal construction gives them a decent heft and a luxuriously smooth feel. The grey tone and colour‑matched knobs gives them a subtle and serious presence on the desktop, and it’s remarkable how much cooler the capitalised logo looks than the lower‑case ‘swoosh’ they used previously. These are beautiful little boxes.

They are designed as desktop interfaces with all the controls on the top surface exactly where I like them to be. The knobs are reasonably solid with a little bit of give in the large encoder, and it does have a nicely satisfying bump as it turns. The majority of the connections are on the back with just the instrument input and dual headphone socket falling past the front edge’s smooth curve. They are absolutely solid on the desk and do not feel like entry‑level audio interfaces in the slightest.

The connections and layout of the iD4 MkII are identical to the original. You have a single combi Mic/Line input on the back with the phantom power button located slightly annoyingly next to it. A pair of jack outputs feed your speakers at the rear, and the headphones are located usefully at the front, where you can plug in both a 3.5mm and a quarter‑inch at the same time. Input 2 is a JFET‑endowed socket on the front designed for electric guitar or bass and will add a little bit of character to the sound. You’ll find it also works well for synths, but essentially, this is a one‑person interface for one mic and one guitar. On the top you have individual gain control over the inputs, some fleeting LED meters and that iD multi‑purpose encoder which handles volume and has a special power we’ll come on to in a minute.

While there’s much that the iD4 MkII and iD14 MkII share, there are also some key differences. The iD4 MkII has a handy Monitor Mix knob that lets you balance direct monitoring and software playback. The iD14 MkII doesn’t have that. Turn the Monitor Mix knob to the left, and the five‑segment LED becomes an input monitor. Sadly, there’s no input monitoring on the iD14 MkII hardware, which was also true of the original. The iD14 MkII does have a separate hardware level control over the headphones, whereas the iD4 MkII shares its headphone level control with the main output.

The iD14 MkII has an additional combi Mic/Line input with independent phantom power with solid switches on the top panel. It’s gained a second pair of outputs and has a lightpipe input that can accommodate eight channels via ADAT or a stereo S/PDIF signal.

While the feature set is decent, competent and similar to every other interface in this price range, when comparing the two you can’t help wondering why the iD4 MkII doesn’t have a headphone level control and the iD14 MkII doesn’t have a Monitor Mix knob or input monitoring.

These are robust interfaces. They sit solidly on your desk and exude a sort of professional calm. They are weighty, serious and look far cooler than their predecessors.

The iD Mixer app has been upgraded and reflects the sleek and stylish software that comes with their EVO audio interfaces. One delightful Windows‑orientated bonus feature that you never see is that the system tray icon gives you quick access to the main settings, including ASIO Buffer Size — bravo!

The mixer is excellent, although more so on the iD14 MkII. First of all, it takes care of all the input monitoring controls missing on the hardware. Then it adds in multiple channels for running different software, and two alternative monitoring mixes that you can switch between or route to any available outputs (iD14 MkII only). It helps you make use of the Loopback functionality, where you can route the output of one piece of software back to another’s input. It’s ideal for live‑streaming the output of your music software.

As well as being a volume control the iD knob has some other useful functions. If you push it down you engage 15dB of dimming. If you hold the Mute and iD buttons together the knob pans the inputs. If you hit the iD button the knob becomes a mouse scroll wheel and means you can take control of knobs and faders just by placing your mouse pointer over them. The bumpy lumpiness that feels good when using it as a volume control feels less so when controlling knobs. Each bump is also a jump in value, which makes it far from precise. It could do with a smooth mode like mouse wheels often have.

The technical specifications line up nicely with other interfaces in their range. Comparing them to their own even more budget‑friendly EVO 4 and EVO 8 interfaces there’s not much in it on paper. They both run at 24‑bit and 96kHz; they have similar signal‑to‑noise of 101dBu, slightly improved dynamic range at 120dB, the same 58dB gain range on the mic input, slightly less on the JFET input.

However, once I got recording, there was a noticeable difference in what I was hearing. The JFET instrument input was smooth and warm, giving a lovely tone to my Telecaster. The microphone inputs, based on the Audient ASP8024‑HE console, were clear, spacious and noise‑free. There’s no doubt that Audient have beefed up the quality of the internal converters in the MkII to climb back on to the top of the pile where the original models were five years ago.

Buffer size options go down to a wafer‑thin 16 samples, which gave an output latency of 2.5ms and a round‑trip of 4.4ms. It just about held it together at that level on my Intel i9 test machine, but it seemed to get comfortable when you eased off to 128 samples giving a perfectly playable 4.5ms output and just under 10ms round‑trip. Just to note that the specs suggest the best performance is to be had with a pure USB‑C connection, whereas I was going into a regular USB 2.0 port.

...the sound quality is exemplary, and the feature set brings them in line with our modern needs for streaming and podcasting.

These are robust interfaces. They sit solidly on your desk and exude a sort of professional calm. They are weighty, serious and look far cooler than their predecessors. While they don’t bring anything particularly new or innovative to the table, the sound quality is exemplary, and the feature set brings them in line with our modern needs for streaming and podcasting. Only the iD14 MkII has had any physical upgrades with the dual headphone output, an extra pair of outputs and the ability to be fully bus‑powered. Otherwise, the performance improvements are internal, although you shouldn’t underestimate the positive impact of the cool new look. The older iD44 and iD22 do now look rather drab and dated in comparison.

The iD4 MkII is a brilliant interface for a singer with a guitar but lacks a bit of versatility once you try to move beyond that as you can’t record a stereo line signal. The iD14 MkII with the connectivity tweaks now has a better balance of features with better monitoring software. It’s more adaptable to different situations, even before adding a further eight inputs via an ADAT connection.

The ScrollControl function can be useful, and most DAW functions support mouse‑scrolling on parameters, although many virtual instruments do not. I want to say it offers a more refined level of control than a mouse wheel, but it’s just too lumpy. It does make for a very grabbable volume control and ultimately it’s the flawless sound and solid build quality that will put the iD4 MkII or iD14 MkII on your desk. 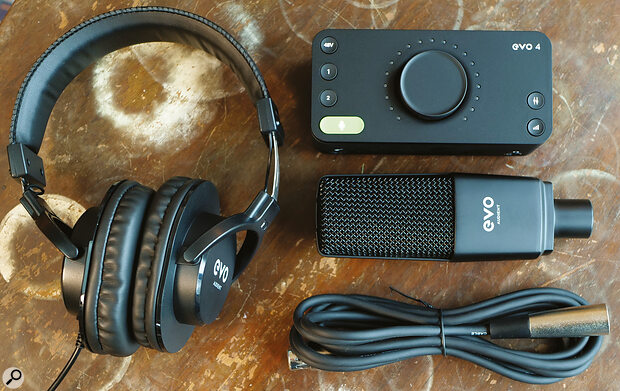 Audient have taken their excellent EVO 4 interface and bundled it up with everything you need to start recording. Well, almost everything, these packages never seem to come with a mic stand. However, what you do get is a pair of SR2000 headphones, an SR1 condenser microphone with shockmount and a cable to connect the mic to the EVO 4, all for £190$249.

These sorts of bundles are brilliant and get people started without having to think about what may or may not work with your interface. If you don’t mind holding the mic, you can get stuck into making music out of the box. I struggled to find anything that would make this stand out from other manufacturers’ similar bundles; however, the EVO 4 is a brilliant little interface. That should be reason enough.

This is a smart‑looking update to the very capable iD4 and iD14 audio interfaces that bring them bang up to date. The iD14 MkII is the most improved and most versatile, but both offer premium‑quality sound at a decent price.