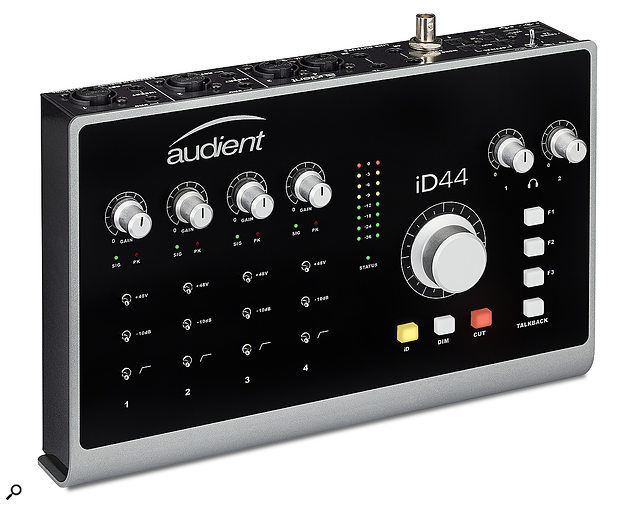 Audient's iD range of desktop USB audio interfaces was launched in 2013 with the arrival of the iD22. The more compact iD14 arrived in 2014, and 2016 brought the even more compact iD4. Now Audient have reversed this shrinking strategy with the release of the iD44, a 20-in/24-out, 24‑bit/96kHz, USB 2.0 audio interface which, with its companion iD Mixer DSP application, runs on both Mac (OS 10.7.5 onwards) and Windows (7 and later) computers.

Its four mic/line analogue input channels — all of which feature Audient's classic, all-discrete, Class‑A microphone preamplifier — appear on Neutrik XLR/TRS combination connectors and, on the digital side, two pairs of optical inputs and outputs can be configured independently to provide additional inputs and outputs in either ADAT or S/PDIF formats. An incongruously bulky BNC word‑clock output connector provides synchronisation for external digital hardware.

Four of the iD44's eight analogue outputs appear on line-level, electronically-balanced TRS jacks that are set up as two L‑R pairs, 1+2 and 3+4. The others (5+6 and 7+8) are routed to the two headphone outputs at the front of the unit.

Analogue inputs 1+2 each have a fully-balanced send/return loop on individual TRS jacks, allowing you to patch in external processors or to connect line-level sources directly to these channels' converter inputs. Plugging instruments into the front-edge mounted, JFET-based, Class‑A DI inputs also bypasses the mic/line inputs on inputs 1+2.

A USB C connector (USB C to C and USB C to A cables are included) offers computer connectivity. Unusually, these days, a rear‑panel metal on/off switch, oriented in the American 'up is on' fashion, controls the external 12V DC/2A wall‑wart power supply.

The iD Mixer application has two screens, Mixer and System Panel, which are used solely to conFigure and control the operation of the iD44, and have no effect on the DAW that the ID44 is connected to as an audio interface. The System Panel allows you to set the format of the optical digital inputs and outputs; select the source for the unit's word clock; set the loudspeaker(s) used when the mono sum mode is selected; trim the levels of outputs 1+2 and 3+4 when Dim and Alt(ernate) Speaker modes are active; set the talkback input (analogue input or external source); and assign functions to the three front‑panel Function buttons. This Screen also routes the iD44's Main Mix, Alternate Speaker (when active) and Cue mixes — together with the DAW Thru (eight direct DAW outputs with no level control) — to its physical analogue or digital outputs. 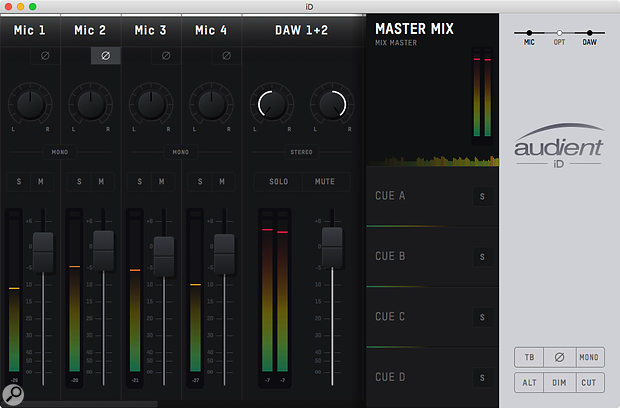 The iD Mixer Screen displays its three available input blocks; the iD44's four Mic(rophone) channels, 16 (max) Opt(ical), and eight DAW returns (plus an additional two DAW returns that allow you to route an external talkback microphone to the main and cue mixes). The ID mixer also allows you to rename channels and to create a main monitor mix and up to four additional individual cue mixes, which could also be used as sends to external processors. Although there's no EQ available on an ID44 analogue input channel, you can reverse its polarity, pan it, solo or mute it and group adjacent channels into a stereo pair. All displayed channels have meters next to their faders that display the current signal levels in dBFS, with 0dBFS being +18dBu. The DAW returns lack the polarity reverse, but otherwise have the same channel controls and metering.

Clicking on a mix in the iD app's Master Section brings up an extended view of that mix's controls and its output level meter. The main mix has an additional Chronometer Histogram meter that displays the signal level along a timeline of the last eight or so seconds in order to allow you to visualise your mix's level changes over that period.

The ID Mixer main mix has no master fader, since the front‑panel rotary encoder controls the iD44's Main and Alt mixes' output levels. The four Cue mixes (which can be renamed) each have a rotary output level control and can be soloed directly to the main mix output. The master section also allows you to select the type of input channels that are visible in the mixer — analogue, digital and DAW — and to activate a further six virtual buttons that duplicate the functions of six of the front panel's illuminated push-buttons. The seventh (iD) button transforms the large encoder into a mouse wheel, allowing you to adjust any scrollable parameter that the Screen cursor is placed on.

In support of earlier iD interfaces, iD Mixer is now compatible with the iD14 and the iD22 — the appropriate downloads are available on the Audient website. Although the iD44 is class-compliant under Mac OS, Windows requires a driver (included in the Windows version of iD Mixer).

Using the iD44 requires both hardware and software setup and execution. With the iD Mixer app installed, the iD44 set up as your DAW audio interface, a clock source set, any additional digital inputs and outputs configured (stereo or mono, ADAT or S/PDIF), you'll next need to route the Main Mix, Alt Spkr, Cue and DAW Thru outputs to the desired analogue and/or digital outputs. Interestingly, if you change either the Main or Alt outputs from stereo to twin mono, the DAW Thru is automatically routed in their place as the ID mixer assumes that these are being used as line-level sends.

There's also some additional software setup of the iD44's hardware to do in trimming the level of the Alt Spkr output to match the Main Mix, setting the monitor Dim level, and optimising the F1-F3 key assignment so that they govern the Alt Spkr switching, the main mix mono summing and single‑side polarity reverse. Finally, you pick the talkback source, build your starting Main and Cue monitor mixes and get to work.

Although the iD44's mic/line channel facilities are limited to gain, 48V phantom power, a -10dB pad, a high-pass filter and basic signal and peak LED metering, you do get the signature Audient audio performance in full — clean, transparent and dynamic with just a touch of character. The analogue input noise floor is also impressively low, and stays that way right up until the gain pots reach the final few degrees of their +60dB rotation. The JFET DI inputs sound good with guitars and basses and are capable of adding a pleasant touch of body and warmth when being fed with a healthy input level. Somewhat unusually for a unit in the iD44's price range, its impressive audio performance comes to our ears via digital converters from two different manufacturers — AKM for the A‑D and Cirrus Logic for the D‑A. Only the rather large switch-on transients generated by the phantom power circuitry detracted from an otherwise stellar overall audio performance.

The iD low-latency DSP mixer software turns the iD44 into a reasonably intuitive and very effective mixer/controller that makes getting your main monitor and cue mixes together a quick and simple process. You also have the option of saving your monitor mixes/setups to your computer for recall later in the project or perhaps as staring templates. You can also save an entire setup as a Standalone State, which saves the current configuration in the iD44 itself, thereby allowing you to use a pre-programmed monitor/cue mix setup without a computer connection.

Although the combination of the iD44 and the iD Mixer app is their most complex desktop USB audio interface to date, it seems to me that Audient have, once again, managed to get the balance between functionality, usability and form factor just about right. In addition, the iD44 sounds good, delivers an exemplary audio performance and has a price that appears to me to offer very good value for money.

Although the ID44 is well-suited to being the centrepiece of a home or project studio, its compact form factor and excellent mic amps and DIs, together with its ADAT-format connectivity should also make it very attractive to mobile recordists and to laptop-wielding musicians on the move.

With the purchase of an iD44 comes access to the Audient ARC collection of free software from Two Notes (Torpedo Wall Of Sound plug-in with eight cabinet emulations); Steinberg (Cubase LE plus Cubasis LE for iOS); Loopmasters (1GB of samples plus 500 store credits); Waldorf's Edition 2 LE (PPG Wave 2.2 synth, Attack drum module and D-pole filter); Producertech (DIY Mastering and EQ Fundamentals online courses plus a £20 credit); and LANDR (10 free masters plus 10 distribution credits towards getting your mastered tracks onto iTunes, Spotify and other platforms).

The iD44 is a compact, well-featured 20-in/24-out desktop USB interface that, in combination with the companion iD Mixer application, possesses a feature set, a level of functionality and an ease of operation that punches well above its price.