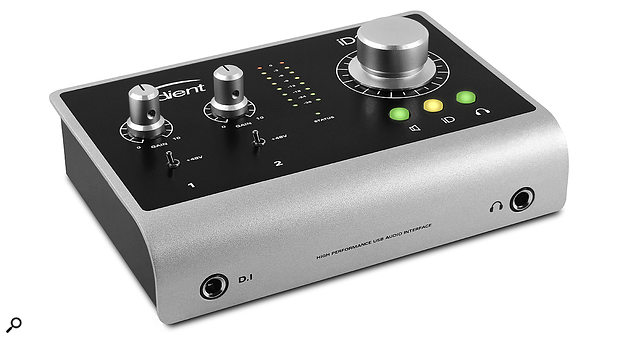 Audient’s new interface aims to keep the quality of its predecessor whilst streamlining the features and cutting the price.

Audient’s first foray into the world of computer audio interfaces was the iD22, a smart and deceptively powerful desktop device that combined dual mic preamps with balanced insert points, monitor control functionality and ADAT-format digital expansion. The iD22’s capabilities were fully explored by Barry Watson in a very favourable January 2014 Sound On Sound review. Audient clearly had a hit on their hands with the iD22, but not everyone needs features such as insert points or alternate speaker outputs, and with these users in mind, Audient have created the streamlined iD14, a smaller desktop unit based around the same core functionality.

The metal-cased iD14 is built to the same high standards as the iD22, but is smaller, and has fewer physical inputs and outputs. There are still two mic/line inputs on combi XLR/jack sockets, while the alternative front-panel instrument socket for input 1 has simply moved to the front, but the insert send and return are gone. On the output front, the headphone socket has likewise migrated to the front of the unit, but the optical output is gone, and the iD14 boasts only a single pair of line outputs on quarter-inch jacks to the iD22’s two pairs. Happily, though, the ADAT optical input is retained, allowing the iD14’s input quotient to be expanded by up to eight additional channels for larger sessions.

The iD14’s rear panel offers a USB port, optical In, two quarter-inch outputs and a pair of combi jack inputs.

As well as rotary gain controls, the iD22’s mic inputs have physical switches that engage a high-pass filter, polarity flip, input pad and +48V phantom power. The high-pass filter is no longer present at all on the iD14, while the polarity buttons have been implemented in software instead, which is no great loss to my mind. The pad has been replaced by another soft button which, oddly, engages a 10dB boost rather than the usual attenuation. The phantom power switches remain, but it would be nice if there was an LED or other visual indication to show when they are engaged. Unlike the iD22, the iD14 will work on bus power; however, Audient say that USB can’t provide enough power to maintain the iD14’s sound quality while also powering mics, so if you want to engage phantom power, you have to use the supplied DC adaptor.

The iD14 also loses the iD22’s Dim and Cut buttons, and two of its three ‘function keys’, which makes sense, given that these are mainly used to switch between different monitor control configurations that aren’t available on the smaller interface. Other changes to the front-panel control setup are more subtle. The iD22 has a large knob to adjust speaker volume and a smaller headphone level control. The iD14, by contrast, features a single endless rotary encoder, plus illuminated buttons that assign this to speaker or headphone control. Between these is a third button labelled ‘iD’. This can be used to implement the ‘function key’ options that are practical within the iD14, such as mono, dim and talkback, but it can also enable a function Audient call ScrollControl. With this active, the encoder behaves like a mouse scroll wheel. The usefulness of this will, of course, depend entirely on what your music software allows you to do with a mouse scroll wheel.

In speaker or headphone mode, the encoder can also be pressed to act as a mute button. And talking of muting, one of the few irritations I encountered with the iD14 is that every time you start it up, the speaker and headphone output levels are reset to minus infinity. There were several occasions where I found myself floundering around in a mild “I’m sure it was working yesterday!” panic before remembering to turn the encoder.

A final physical change compared to the iD22, and another welcome one, is that the LED ladder meter that displays output levels has grown four extra rungs. Sadly, though, there’s still no physical metering of input signals: even a simple ‘input present’ or peak/clipping LED would be nice.

The iD14’s less generous complement of I/O is reflected in the software control panel, which now features only a single cue-mix bus, but otherwise offers pretty much all of the functionality of the iD22’s version. You can show and hide different sections of the mixer, but for some reason, although the control panel window automatically resizes, it never quite grows wide enough to display all the channels without scrolling, even though there’s plenty of room on screen! 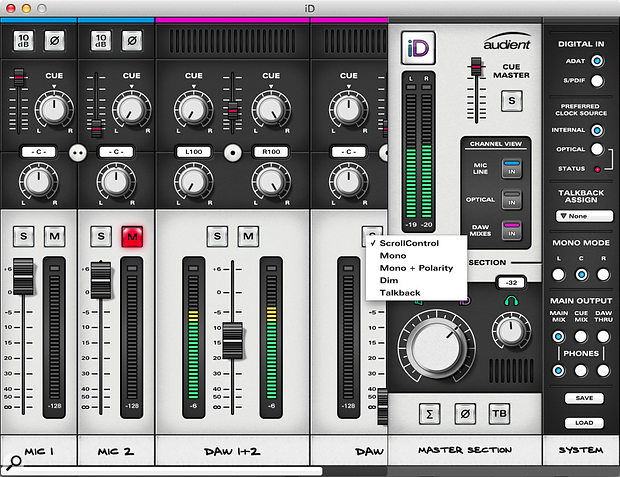 Overall, though, I think that Audient have judged the feature set of the iD14 very nicely. Unlike some ‘desktop’ interfaces, it does not feel cramped in use, yet nor is it burdened with a cumbersome breakout cable. The preamps and headphone amp sound good to my ears, and the control panel software is clear and user-friendly. Most of the iD22 features that have been dropped won’t be missed in the average small home studio, where you’re unlikely to find multiple sets of monitors, or analogue outboard equipment; yet should you need to track drums or other multi-miked sources, the ADAT input makes it easy to attach a multi-channel preamp such as Audient’s own ASP008. And although some of it has been shifted into the software domain, the iD14 offers all the monitor control you’re likely to need on a day-to-day basis. Most importantly, although it has fewer features than its bigger brother, the iD14 makes no compromises on sound quality.

The iD14 is a well-judged interface and monitor controller, which retains the core features of Audient’s larger iD22 in a smaller and more affordable package.