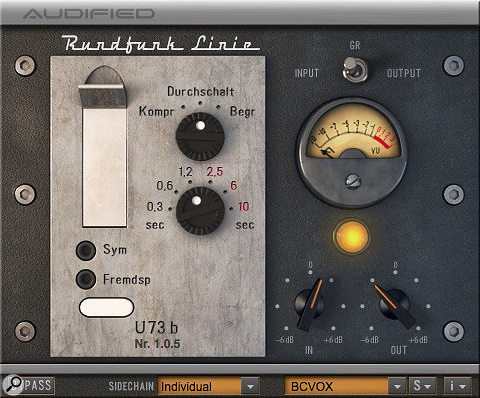 Although not as well-known as the classic Fairchild 660, the Telefunken U73b is in many ways its European counterpart. Like the Fairchild, it is a ‘variable-mu’ compressor/limiter which achieves gain reduction by varying the bias of a vacuum tube, and was originally intended for the same purpose: to control the dynamics of programme material being fed into a vinyl cutting lathe. Audified’s recreation is, as far as I know, the first attempt to emulate this particular vintage valve cult object in software.

The U73b’s control set is even more basic than that of the Fairchild: a three-position switch offers a choice of compression, bypass or limiting modes, while you also get a choice of three fixed and three variable release times. Like many old compressor designs, there’s no threshold or ratio controls, and the amount of gain reduction you obtain is purely a function of how hot the input level is. To make it easier to vary the amount of compression, Audified’s emulation includes input and output gain knobs, plus a calibration dial to set a suitable amount of headroom for your chosen working level. It’s also possible to defeat the original’s built-in 100Hz side-chain high-pass filter, and to link or unlink the left and right side-chain signals in stereo mode.

Even with these concessions to the 21st century, though, the U73b plug-in can be a bit fiddly to use. The input and output controls are small, and I invariably found that they needed to be set completely differently in compression and limiting modes. And despite the option to switch it into limiter mode, this obviously isn’t the most versatile compressor in the world. In compressor mode, the knee is so soft as to be non-existent, and even the fastest release time isn’t what you’d call snappy.

Nevertheless, what the U73b plug-in lacks in flexibility it makes up for in character. Although smooth, it’s not exactly lush in the way that a Fairchild can be, and it has a noticeable effect on the tone of the programme material, lending everything a slightly forward, mid-rangey character. It’s the sort of thing that doesn’t work in every context, but can really enhance the right sources. There were times when I particularly liked it on vocals, and as a mix-bus compressor it has a definite presence and authority to it. If you’re looking for something a little out of the ordinary, this is very much worth a try. Sam Inglis