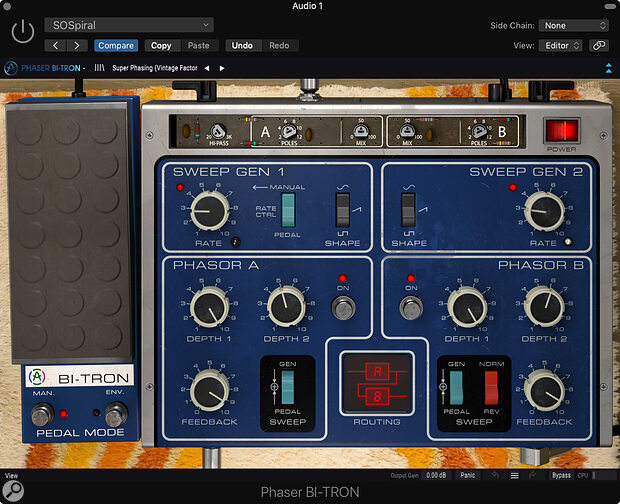 Arturia’s take on the Mutron Bi‑Phase.

Originally launched as the Modulations Bundle, Arturia’s chorus, flanger and phaser are now available as separate plug‑ins. Each one is modelled on classic hardware but also boasts DAW‑friendly enhancements, including tempo sync and automation support.

Perhaps the most enigmatic of the three is the Phaser Bi‑Tron, shown above, which emulates a sophisticated dual phaser pedal from 1974; the name and blue panel design leave little doubt that its inspiration was the Mutron Bi‑Phase. Combining two independent six‑stage phase‑shifting circuits, the original offered a number of control possibilities and it was also the first phaser to include a feedback control for creating a more resonant phasing effect. The plug‑in provides numerous routing options that employ the two phaser stages in series or parallel for mono, stereo and mono‑in, stereo‑out configurations.

Two sine/square/saw LFOs, pedal control and an envelope follower with an integral compressor open up possibilities for some quite advanced modulation effects. An on‑screen pedal can be automated for manual adjustment, or controlled from the envelope follower, so you aren’t limited to LFO control.

There’s also a hi‑pass filter, the option to change the number of filter poles from two to 12 for each of the two circuits independently, and the facility to reverse the sweep of the second phaser channel. These additional functions, plus a wet/dry mix control and the ability to polarity‑invert one channel, are accessed from an Advanced panel that opens up as a strip along the top of the front panel.

Otherwise, the controls follow those of the original and are largely self‑explanatory to anyone who has used a phaser before. However, it’s definitely advisable to read the manual to learn about those pedal and envelope follower functions.

There’s a lot of flexibility not afforded by conventional phaser pedals.

The timbre of the effects is largely down to the settings of the Depth and Feedback controls, ranging from a subtle phaser to an almost wah‑like resonant sweep. There’s a lot of flexibility not afforded by conventional phaser pedals, not least having two independent sections, so although things like guitars and electric pianos might be an obvious starting point, the tempo sync feature opens up lots of possibilities for treating rhythm parts. Using the pedal as a manual controller or engaging the envelope‑follower also helps get away from cyclic sweeps if you need something less obvious. While the phaser isn’t usually one of my go‑to effects, I found this one very appealing.

Saved By The Bel

Next up is the BL‑20 Flanger, which we’re told is based on the English Bel stereo flanger that appeared towards the end of the ’70s, and whose bucket‑brigade circuit gives it a smooth analogue sound. The plug‑in has three different modulation sources: LFO, manual or envelope follower. Its two independent delay circuits support true stereo outputs from mono or stereo inputs and the outputs can be set to sweep in opposite directions to produce a more dramatic stereo effect.

As usual, Arturia have added a few modern Advanced extras such as a function generator, a stereo width control, and a high‑pass filter. A button switches to ‘through‑zero’ flanging, to produce the effect in which most of the sound seems to get sucked into space as the sweep passes through its null point. 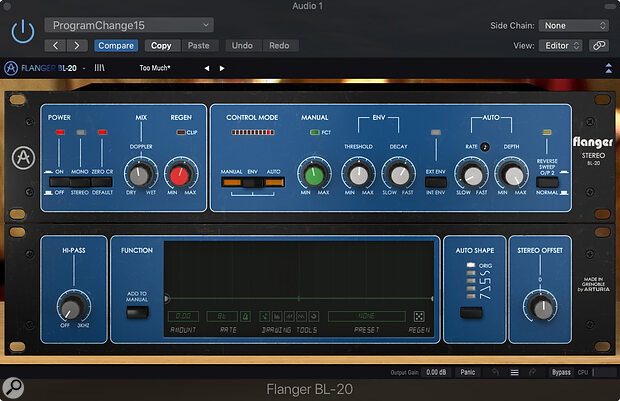 The BL‑20 sounds rather more refined than your average ‘whooshy’ flanger.

The main control panel houses the usual controls, and in this case includes the Envelope and Auto modulation settings. Drop down the Advanced panel and you’ll find a choice of LFO waveforms, a Stereo Offset knob, a variable hi‑pass filter and the function generator. The high‑pass filter is useful for preventing the flanger from unduly affecting low frequencies.

First featured in Arturia’s Pigments, the function generator, which may be tempo‑sync’ed, allows a multi‑point modulation waveform to be created that can be stepped like a sequencer or used to generate a series of rises and falls, so as to produce a smooth but less cyclic modulation pattern. A library of function generator presets is built‑in, and there’s also a random feature that’s activated by clicking the dice icon. When the Add To Manual button is pressed, the indicator LED above the Manual knob in the Main panel indicates that the Function Generator is modulating the Manual setting.

Sonically, the BL‑20 sounds rather more refined than your typical ‘jet‑whoosh’ flanger, and this allows it to be used in a number of ways to enhance a sound rather than to add a very obvious flange. At faster settings, it also produces a fairly credible rotary speaker type of effect, while slower, shallower settings can sound chorus‑like. Best of all, though, is the ability to automate the manual mode and/or to use the function generator to create a more variable tape‑flanging type of emulation. Even if you already have a perfectly capable flanger, I think you’ll find that you can coax some new variations out of this one.

There are few simpler‑to‑operate chorus devices than Roland’s legendary Dimension‑D. This analogue delay device has just five buttons and no knobs, yet produces wonderfully subtle ensemble chorus sounds and remains a studio favourite. Arturia have emulated the original well, but as you might expect of this developer they’ve also added an Advanced control panel. This time, it offers a choice of LFO waveform, four Dynamic Colour settings, wet/dry balance and variable stereo width. Dynamic Colour adjusts the settings of the companders, which were used in the original hardware to reduce the noise inherent in the analogue delay chips. There’s also a Mode switch for selecting a mono source (a sum of the left and right inputs) or a true stereo source. 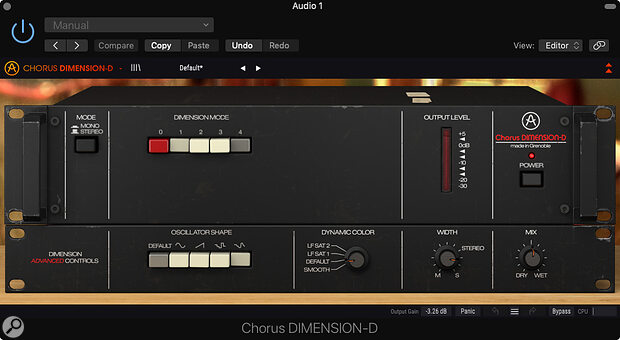 Even the model of the classic Roland Dimension‑D chorus boasts some extra features.

That red ‘0’ button was a bypass on the original but Arturia have changed it into a ‘Mode 0’ button; this retains the circuit coloration when the chorus effect is bypassed. Buttons one to three provide different chorus presets, one being the most subtle, while button four increases the level of the wet signal for each of the three chorus settings.

I remember reviewing the original Dimension‑D back when it was a new product and I’ve tried several plug‑in emulations since, so it’s very familiar to me. Roland have even put the effect in a Boss pedal. Arturia’s take on the Dimension‑D sound is authentically rich, subtle and appealing. Chorus effects can sound too obviously cyclic and cliché, but this one adds just the right degree of richness and space without churning up the sound. Synth pads are an obvious candidate for treatment with this plug‑in, but you really can use this effect on anything from vocals to guitar.

While, at first glance, these plug‑ins seem to cover effect types that most of us will already have, they not only sound good but they are also more flexible than most analogue models, thanks to Arturia’s well‑chosen advanced features. Taken together, they form a very attractive suite of modulation plug‑ins.

The three hardware products modelled here are all classics of their genre, and are all the more useful because of the added Advanced features.