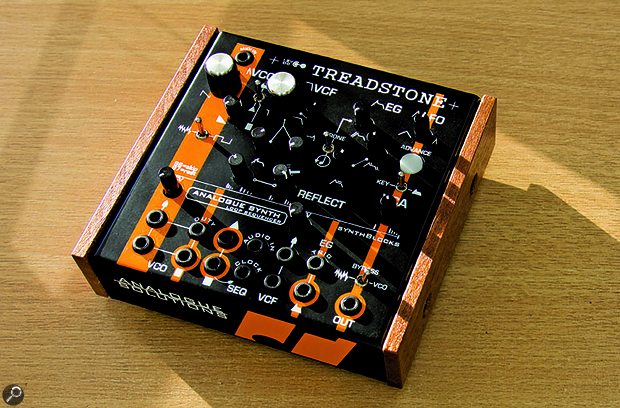 The Treadstone packs a lot of analogue synth into a very small box.

"It’s so cute!" was my daughter’s reaction upon seeing the Treadstone, and she’s right, it is.

A semi-modular analogue synthesizer in a package that fits in your hand, the Treadstone is available either as a desktop unit, replete with miniature real wood sides, or as a Eurorack module. The design philosophy is clear: pack as much analogue synth into as small a space as possible without compromising the sonics.

The synthesis architecture is a familiar one: a single discrete VCO, an SEM-style 24dB/octave filter, an LFO, noise source, sub oscillator and envelope generator. There’s also a sequencer and a digital delay effect. An impressive list for a box as small this.

For control, Treadstone offers MIDI input on a 3.5mm jack — something that’s becoming much more popular these days in modular and semi-modular gear. There’s also 1V/oct CV and gate inputs and CV inputs for PWM, filter cutoff (both 1V/oct and variable), envelope trigger and sequencer clock. Dedicated outputs are available for VCO (square waveform only), LFO (triangle and square on separate jacks) and envelope, as well as the main audio output of course.

The synth voice is self contained. For basic use, no cable patching is required. Starting at the oscillator section, there is a master tuning control (one of only two normal-sized knobs on the front panel). You can blend between saw and square waveforms and select a PWM source using a three-way switch (envelope, LFO or off). A second three-way switch allows either a noise source or a sub oscillator to be mixed with the main signal, with the middle switch position adding neither. It’s a shame that these aren’t on dedicated pots because firstly, you can’t have sub oscillator and noise at the same time, and secondly, you can’t control the amount. They’re either on or off.

Moving to the filter section we find a filter cutoff control and smaller controls for resonance, envelope amount and MIDI velocity amount. The envelope section is a classic ADSR type, but uses only three controls, with the decay and release sections sharing one knob between them. There’s also a three-way switch to choose different triggering options: normal note trigger in the centre, a Drone mode (where the sustain control effectively becomes volume), and an LFO re-trigger mode, which uses the LFO to trigger the envelope upon each completed cycle.

The digital delay is a simple affair. Delay times range from the low milliseconds to around 400ms. I’m guessing here as the manual doesn’t supply this information, but the range isn’t huge and sadly there are no CV inputs for any of the controls. It sounds decent enough and is useful for adding a little atmosphere to an otherwise dry sound, but don’t expect to get wacky and wild with it.

Astonishingly for a synth of this size, the Treadstone also crams in a sequencer. Once again, the size of the unit dictates a certain operational simplicity, with the only front-panel control being the Advance button, which triggers the next note in the sequence (it doubles up as an LFO rate indicator too). The sequencer works by remembering the last 16 notes received via MIDI. You can advance through the sequence using the Advance button and manually replace the current note with an incoming MIDI Note, or use MIDI Notes 96 and 97 for skip and rest, respectively. The sequence can then be clocked by either MIDI clock or a suitable +5V analogue clock. The sequencer is a nice addition, but I found myself missing any way to do ties, slides or easily reset the sequence to the first step. The fact that the sequencer is always recording means that the sequencer and normal MIDI operation are mutually exclusive. To transpose the sequence, one would have to program the sequence via MIDI, but transpose via CV, which might prove fiddly in some setups.

The Treadstone excels at very traditional synthesizer sounds. Sawtooth or square bass and lead sounds fall out of it effortlessly and, thanks to the discrete oscillator, they sound authentically ’70s. The SEM filter also sounds great although it’s limited to low-pass only and does not self-oscillate (I know SEM filters don’t — but it does preclude a bunch of useful synthesis tricks). Basic analogue percussion and drum sounds are also easy to conjure.

Once you start to push the Treadstone into more complex territory, you start to run up against the limitations imposed by the lack of space. For example, there’s no level control for the oscillator. That means that if you wanted to use only the noise source, say for some hi-hat synthesis, you can’t. Neither could I find a way to use the audio input on its own. It’s always mixed with the main oscillator at a fixed level. It also means you can’t adjust the level of the oscillator going into the filter, a simple trick for adding or removing filter overdrive. Another victim of the lack of gain staging is the digital delay. It’s a great addition to have, but at medium to high feedback levels it begins to clip. Normally, one would back off the input signal to the delay in order to combat this, but this is not possible. As a result, the Treadstone can sound somewhat ‘overblown’ at times.

The Treadstone fits a lot of synth into a relatively tiny space. It can sound like synths five times its size but it does make compromises in its attempt to be so small. The analogue synthesizer market is a busy place right now, especially in this price range, but if you’re looking for something super small, authentically analogue, self-contained and maybe even cute, the Treadstone is certainly worth a look.

The Treadstone is a feat of careful engineering, solidly built, and it sounds great. But it does suffer from some unavoidable limitations dictated by its size. Size, in this case, does matter and could be the Treadstone’s strongest or weakest points depending on your requirements.