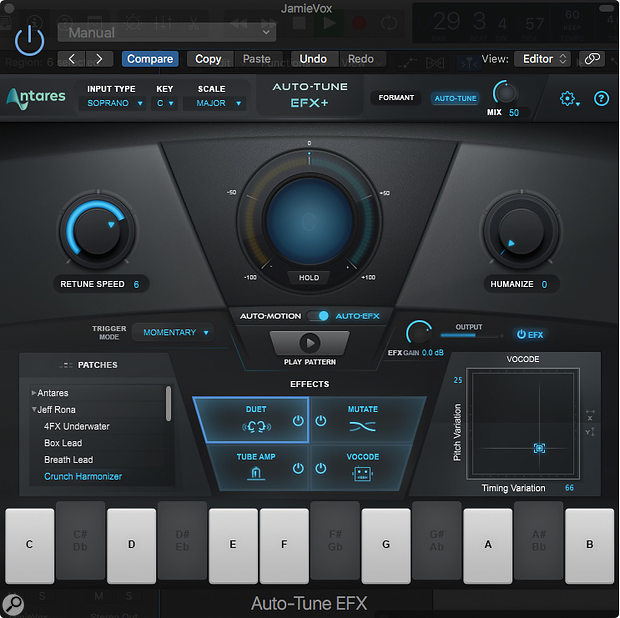 Antares' EFX version of Auto‑Tune was designed specifically to create less-than-natural vocal effects, and this 'plus' version adds yet more creative firepower, to take it far beyond quantised pitch yodelling. The common Mac and Windows plug-in formats are supported, and two machines can be authorised at the same time.

The core features of Auto‑Tune EFX are augmented by a new Multi–Effects Rack and a new Auto-Motion pitch-shifting melodic pattern generator, the latter acting rather like an arpeggiator. As the plug-in relies on pitch tracking, it requires a monophonic source for the best results. Formant correction works the same as with other versions of Auto‑Tune, and there's a low–latency mode for real-time performance that sacrifices only a little quality. A large selection of presets shows what this thing is capable of.

The expected features include the ability to select a voice type, set a user scale (by key and type or via the keyboard) and to adjust the Retune Speed and Humanize parameters. Using these with delicacy, you can produce natural-sounding pitch correction for routine vocal tightening. The keyboard at the bottom displays the current detected pitch in blue, and notes can be added or removed from the scale with a click. The plug-in is also compatible with the optional Antares Auto‑Key software that can work out the key for you.

The Multi–Effects Rack modules include: Pitch and Throat, which uses the formant shifting alongside pitch shifting; Duet, for natural-sounding double–tracking; Vocode, which aims to deliver classic vocoder effects; Tube Amp, for adding analogue warmth; Mutate, for ring modulation; and a high-pass EQ filter. 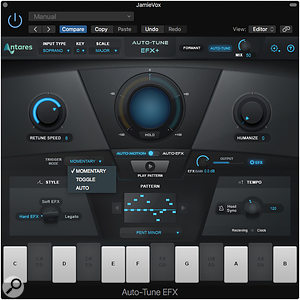 Auto-Motion features a library of preset melodic patterns that follow the key, and this can be set to an adjustable speed or be sync'ed to tempo with a choice of subdivisions. The pattern browser shows the general shape of each pattern in a mini piano-roll view. There are three different trigger modes and you can use DAW automation to bring the effect in and out. The modes are Momentary, Toggle or Auto, which activates when an incoming pitch is recognised. There's also a choice of Hard, Soft or Legato pitch correction, the latter adding smoother note transitions. In Latch mode, the Play Pattern button acts as an on/off switch.

Each Multi-Effects Rack effect comes with its own library of presets, and each patch can combine up to four effects modules. Each module has two adjustable parameters, and the clever part is that these can be controlled by a simple X/Y pad. You just pick a Multi–Effects Rack template with the combination of effects you want (you can't populate the effects slots yourself) and go from there. The Vocode module (which always tracks the input pitch; MIDI control isn't supported) offers emulations of 10 different vintage vocoders, for which X is the wet/dry mix and Y the pitch shift applied to the synthesized output. Pitch and Throat combines dynamic pitch shifting and throat modelling, the X parameter corresponding to throat length and Y to pitch shift. Duet offers adjustable pitch and time variation, and the Mutate ring modulator sees X controlling the carrier frequency and Y the wet/dry mix.

It soon becomes clear that you can perform some serious vocal manipulation with this plug-in.

Operation is straightforward, with the large knobs looking after Retune Speed and Humanize. The faster the retune speed and the lower the humanise setting, the more hard-quantised the vocal pitch sounds. The four effects are located in the lower centre section of the screen, with the X/Y pad to the right and the patch browser to the left. Switch to Auto-Motion view and the effects section of the GUI is replaced by the automatic pattern generator section.

With just a little experimentation, it soon becomes clear that you can do some serious vocal manipulation with this plug-in. (That said, its more subtle pitch-correction and fake double–tracking talents shouldn't be ignored.) Early examples of 'abused Auto‑Tune' were often mistaken for vocoding, so it's nice to see things come full circle with the automatic vocoder being added. The pitch/formant manipulation can be used very subtly to change the character of a voice, or you can push the boundaries further and turn your lead vocalist into Gollum's Martian cousin. Ring modulation isn't conventionally musical, but it is useful as a spot effect, or for creating more robotic, dissonant sounds. The pattern generator can also be a lot of fun — though is perhaps best used sparingly. You can't create your own patterns, but there's a surprisingly long list of presets that covers a lot of ground.

Auto‑Tune EFX+ is very easy to use and capable of some genuinely surprising results, many very obviously effected, that can really kick–start the creative process. And don't think you can only use it on vocals — most monophonic sources seem to generate something useful, so as always experimentation is the key.