Antelope Audio are all about high-end quality at a lower price. Does the third generation of their Orion 32+ deliver the goods?

Over the last decade or so, Antelope Audio have become major players in the world of audio interfaces. Their range takes in the USB, Thunderbolt and HDX connection protocols, as well as stand-alone mic preamps, master clocks and A-D/D-A converters, not to mention an intriguing selection of modelling microphones. And while there are no 'budget' products in the Antelope range, one of their selling points is to offer state-of-the-art specifications and sound quality at relatively affordable prices.

The Orion 32+ Gen 3 under review here is a good example. It provides 32 channels of A-D and D-A conversion, with connection to a host computer over Thunderbolt or USB2, and achieves dynamic range figures of 121dB on its inputs, 120dB on its line outputs and a remarkable 129dB on its stereo monitor outs. It employs Antelope's Acoustically Focused Clocking technology, with a built-in oven keeping its clocking crystal at a constant temperature. Digital I/O is available in optical MADI and ADAT format as well as stereo coaxial S/PDIF, with a total of 64 inputs and outputs available over Thunderbolt, and dual word–clock outputs to allow you to share the acoustic focus with your other digital hardware. The icing on the cake is a powerful internal FPGA, which powers a versatile system of low-latency effects.

In terms of specifications and features, then, the Orion 32+ is a potential competitor to products like Apogee's Symphony I/O MkII 32x32 and Lynx Aurora (n) — but it's a lot more affordable, and actually goes beyond those rivals in providing both 32 channels of analogue I/O and comprehensive digital I/O simultaneously. It's supported under both Windows and Mac OS, with a custom Thunderbolt driver promising very low latency on both platforms. So, if you're in the market for a single interface to serve as the focal point of a powerful studio setup, will the Orion save you money without compromising on quality?

The third-generation Orion 32+ is a smartly presented, 1U rackmounting device finished in an understated black. Its front panel is relatively minimalist, with the only controls on offer being a handful of buttons. Five of these, arranged in a bank to the right, offer instant recall of preset configurations, while the red Antelope button opens a control menu that lets you set the clock source and trim levels on the I/O using increment and decrement buttons to the left of the display. In normal use these adjust the sample rate, which is displayed on an LCD that is almost as large as the two 16-channel meter banks adjacent to it. There are no headphone outputs or hardware monitor controls, but pressing and holding the power button provides access to various housekeeping and global settings.

The Orion 32+'s rear panel sports a host of connections for word clock, S/PDIF and ADAT along with a pair of quarter-inch Monitor outputs and eight DB25 connectors for the 32 line inputs and outputs.

The rear panel is, as you'd expect, much busier, with eight DB25 connectors carrying the 32 line inputs and outputs, plus a pair of quarter-inch jacks for the additional stereo monitor outs. The manifold digital I/O is present on all the usual connectors, but even in this third-generation model, the Orion 32+ still sports the older USB Type B and Mini DisplayPort Thunderbolt 2 sockets rather than the more current Type C variants. A USB (A to B) cable is included, but Antelope are, sadly, members of that large club of interface manufacturers who somehow feel it's OK to not supply Thunderbolt cables with Thunderbolt interfaces. Incidentally, I found that the review Orion was not recognised over USB if I'd previously connected it by Thunderbolt, unless I physically powered it down by switching the mains power off in between.

On The Launch Pad

My first encounter with an Antelope Audio product was in December 2014, when I reviewed their Zen Studio. Five years on, the control panel software supplied with the Orion 32+ is recognisably the same, though it has of course evolved somewhat. One of the most welcome improvements is that it's now freely resizable. 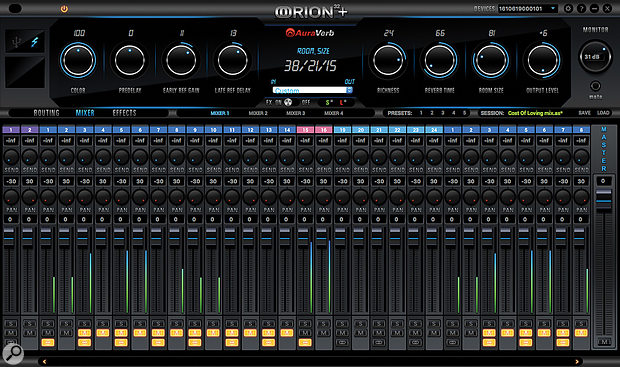 As before, you can't open this control-panel software directly. Instead, you begin by double-clicking Antelope's Launcher program, which checks for software and firmware updates and presents you with a list of attached devices. Thankfully, it's no longer compulsory to install every update, but the launcher still seems very keen to do so, frequently bringing up a Mac OS dialogue asking for permission. Whilst I can understand Antelope's desire to have all users running the latest version of everything, those who prefer to establish a stable system and stick with it might tire of this.

One thing that puzzled me to start with is that the launcher seemed to present three connected Orions — and, if I had the auto-run option ticked, loaded three instances of the control panel. This is, apparently, not a bug but a side-effect of a powerful feature, namely the fact that Antelope interfaces can be controlled by additional computers connected to the same network, with the number of possible Orions appearing depending on the network configuration. Unfortunately, this feature and related behaviour are not described at all in the documentation, and I still can't claim to understand it properly. Error handling could also be a bit more friendly: if for some reason the launcher can't communicate with the Orion, it tends to generate messages like "'NoneType' object is not subscriptable".

When the control panel itself opens, you're greeted by a colourful virtual patchbay showing all the available inputs in the top half and outputs in the lower half. Inputs can be connected to outputs by clicking to select them and then dragging to the relevant destination. You can Shift-click to select blocks of I/O to speed the process up, and as long as your colour vision is good enough to differentiate the various input and output types from one another, it's about as clear as it could be expected to be. There is a pop-up matrix view for those who find the routing easier to visualise on a grid.

One unusual feature of Antelope interfaces is that there are independent record and playback paths for both the Thunderbolt and USB connections, which appear as separate blocks in the patchbay. This doesn't allow you to connect two computers simultaneously, but does mean that because the default configuration is set up for Thunderbolt use, if you connect using USB, you won't actually hear anything until you modify some of the routings. It would be a good idea if, first, this was documented more clearly, and second, the interfaces shipped with a factory preset that allowed them to be instantly reconfigured for USB use (which is eminently possible, thanks to the front-panel buttons). Note that although there are 64 Thunderbolt Rec and Play patch points — thus allowing you to address all the MADI channels simultaneously, or 32 analogue and 32 digital inputs and outputs at once — there are fewer USB ones. This is because the Orion 32+ is a USB 2 rather than a USB 3 device and thus subject to bandwidth limitations. The default limit is 24 ins and outs over USB; the Settings dialogue includes an option to increase this to 32, but not all systems will work at this setting.

Physical inputs and DAW record/playback buses aren't the only connection points that appear in the patchbay. There are also inputs and outputs to four 32:2 mixers and to 16 channels of 'AFX' processing, while the FPGA is also used to provide a global reverb which can be applied within the first of the four mixers. The mixers themselves mostly behave in a conventional way, except that the pan behaviour is strange. When you pan a mono source inwards, nothing audible happens until you get near the centre, whereupon the signal suddenly jumps into the middle and gets twice as loud. Antelope acknowledged that this is not how it's supposed to work, so hopefully a fix is in the offing. 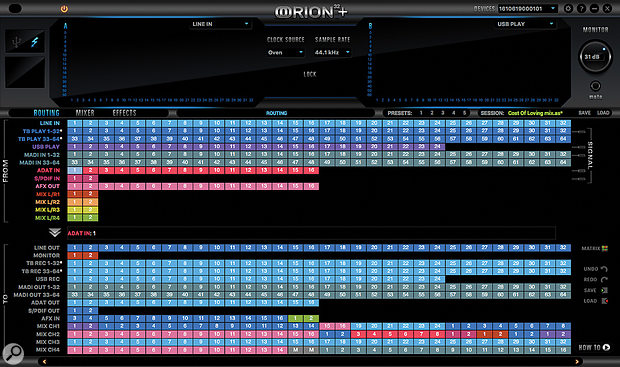