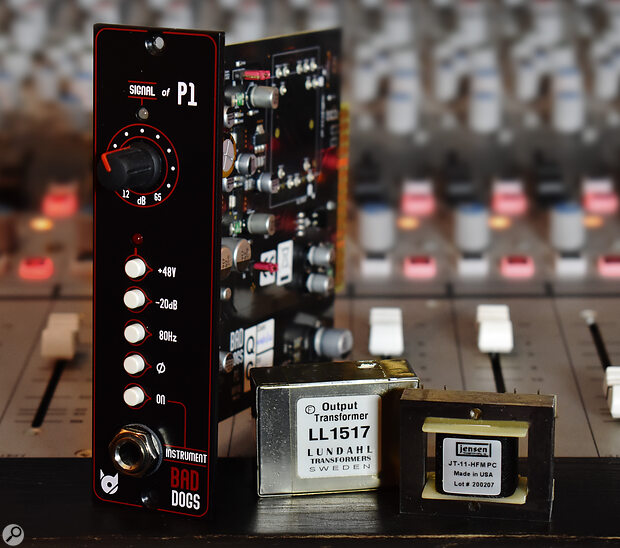 Ever fancied trying different output transformers in your mic preamp? Then check out the P1...

Bad Dogs were founded in 2020 by Italian electrical engineer Francesco Canacci and recently sent us their debut product, the P1 500‑series mic preamp, for review. A high‑quality but cost‑effective preamp, it offers an interesting twist that should help it stand out in what is a crowded market place: the user can choose to add or swap output transformers, to tailor the sound to taste.

The P1 is a simple, tasteful‑looking design that includes all the standard features you’d expect of a good preamp: 48V power, switchable polarity inverter, 20dB pad and 80Hz high‑pass filter, and a front‑panel quarter‑inch TS jack instrument input. The mic preamp can apply between +12 and +65 dB of gain and has an input impedance of 1.5kΩ, while the instrument input offers ‑5 to +45 dB and a 1MΩ input impedance. Both can handle pretty hot sources and are within ‑3dB of a flat frequency response from 4Hz to 50kHz when at their maximum gain.

The review model was supplied with two cost‑option output transformers: a Jensen JT‑11‑HFMPC and a Lundhal LLI517. The P1 doesn’t need these to operate, but they do introduce subtly different characters, should that be desired. The idea is that the user fits or swaps out the transformers. Following the steps described in the manual, this was a really easy, straightforward process: there’s no soldering or wiring involved; you just flick a small jumper on the circuit board and carefully insert the transformer in its socket.

The P1 arrived at an opportune time, as I already had several preamps in the studio for testing. It’s often surprising just how small the audible differences can be between models, even those with very different asking prices, but there are subtle differences nonetheless, particularly if you drive them harder.

Putting the P1 up against some well‑known and expensive preamps, the P1 held its own very well indeed; and these comparisons included close kick and snare drum duties as well as DI’d bass guitar and acoustic guitar recorded with a small‑diaphragm condenser mic.

On kick and snare in particular, I felt that the Lundhal revealed a little more in the low‑end, whereas the Jensen seemed a touch brighter‑sounding on the snare.

Bad Dogs describe the P1 as a high‑bandwidth design and my perception, with no transformer fitted, was that it captured the full range of an instrument without imparting a very noticeable character — reminiscent of the clean‑sounding preamps on my Audient 8024 console. Bringing the transformers into play made a meaningful difference to the sound, albeit a small one, and pushed the P1 more in the direction of, say, my Neve 1073LB modules. Assessing the difference between the Jensen and the Lundahl transformer sounds felt very much like splitting hairs. There are discernibly different characters, but it’s all very subtle; I’m not sure my own audio geekery has quite reached the level where I have a distinct preference but when A/B comparing recordings I made with them, on kick and snare in particular, I felt that the Lundhal revealed a little more in the low‑end, whereas the Jensen seemed a touch brighter sounding on the snare.

When it comes to preamps, 500‑series users are spoiled for choice but the P1’s price/performance ratio makes it very good value. It’s a preamp that I’m very happy to use alongside or instead of the various big‑name preamps I have here that cost more than twice its price, and the optional transformers are not merely a gimmick: both add a familiar, pleasing thickness that works well on most sources. If you just want a good preamp, then, the P1 is well worth considering, but if you enjoy shooting out equipment and diving deep into fine‑tuning your recording chains, it could prove particularly attractive.