Despite its name, the Piano 5 is the sixth Nord Piano, coming after the Piano 4 and the more recent Nord Grand. I must admit that I love the Grand, not because it’s the most fully featured stage piano I’ve reviewed (it isn’t) but because my fingers love its Kawai keybed, and I couldn’t stop myself from playing the damn thing while I had it here. Nevertheless, the Piano 5 reverts to the overall design and the Fatar keybed of the Piano 4, although it now offers two widths — 73 note and 88 note (the smaller of which will appeal to gigging musicians for whom size and weight is a significant consideration) — and much inside has changed.

At first sight, the Piano 5 doesn’t look much different from the Piano 4 but, when you inspect it more closely, you’ll find that its control panel has been remodelled, and not just to accommodate some important new features. Nevertheless, it took me no time at all to become comfortable with it, and I’m sure that even seasoned players of earlier models will be whizzing around it within minutes.

Since the release of the Piano 2, Nord Pianos have been based upon two of Clavia’s underlying synthesis engines, the Piano and the Sample Synth, combining them with a selection of Clavia’s customary effects. The Piano is based on the Nord Piano sample library and organised into six Types, each of which can contain a selection of Models. The Piano 5 is delivered with a selection of Models pre‑installed but you can replace these by downloading new ones from Clavia’s website and swapping them in and out using the Nord Sound Manager. There are four Model sizes, ranging from Small to XL, and you’re free to choose from these as you please to make the best use of the available memory.

Depending upon the Models chosen, the acoustic pianos offer string resonance and pedal noise, with three velocity curves, an optional ‘softer’ release, and three timbres — soft, mid and bright — at least one of which (soft) is obtained not by applying filters but by adjusting which samples are played at any given velocity. The electro‑mechanical pianos add Dyno 1 and Dyno 2 settings to create the more aggressive, cutting sounds of the preamps that inspired them, and the same button also provides access to a selection of different Clavinet voicing combinations which, when applied to the pickup combinations available as Models, provide a wide (but not all‑encompassing) range of Clavinet sounds. In addition to these, the Piano provides access to harpsichords, digital pianos and a small selection of non‑keyboard sounds.

The Sample Synth is based upon Clavia’s ever‑growing library of sampled instruments, which now includes some single‑triggered monophonic lead and bass synths. Again, the Piano 5 is delivered with a factory selection and you can swap others in and out up to the limit of the memory. But beware... the sample format has been updated in the Piano 5 to take account of various new synthesis facilities. This means that the previous library is no longer compatible.

In addition to playing the sampled instruments ‘as is’ you have a limited but valuable range of control over them, much of which is new to the Piano 5. There’s a new bright/soft filter setting, you can now apply three velocity settings to make sounds dynamic, and you can also now apply three degrees of unison with increasing detune and spread. In addition, a new vibrato generator offers rate, depth and three delay times. This means that, when these are combined with the existing Attack and Decay/Sustain/Release controls (which provide AD, AS and ASR contours) the Sample Synth now offers simple filtering, shaping, modulation, dynamics and unison, so there’s a lot more that you can do with it than you might think. The only thing that has been lost from previous revisions is the ability to direct velocity to the filter cutoff frequency; velocity will only affect brightness if the underlying sampler layers provide this, and then only if the amplitude dynamics button is activated. While the additions are welcome, losing the velocity‑sensitive filter is a significant step backward.

The latest version of the Nord Sample Editor was also released while I was writing this review so I thought that it would be an opportune moment to revisit it. I set up a simple registration on a nearby organ and recorded a single Wav file comprising every semitone across one manual, playing each note for about two seconds and allowing a second or two of silence between. I then dropped the file into the GUI of the editor, whereupon every note within it was detected, its pitch was determined, and it was allocated to the correct key on the scale. I then selected all of the keys, hit the Loop button, and pressed ‘Generate & Transfer To Nord’. In moments, I was able to play my new instrument on the Piano 5. I found just a handful of notes with obvious loops, so I tweaked these in the editor, regenerated the file and downloaded it again. The whole operation had taken just seconds! 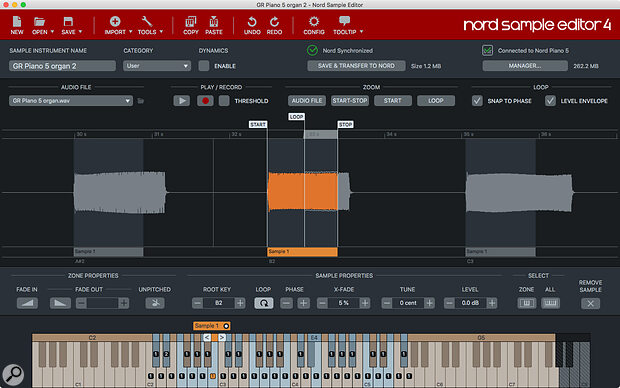 I wondered how the editor would handle sounds with fewer samples per octave, so I found a folder than contained a set of RMI Electrapiano samples that I had created years ago by playing a diminished scale rather than every semitone. I selected all 20‑something files simultaneously and dragged them into the Sample Editor. Again, the pitch of every sample was identified and this time allocated to an appropriate range of keys. Again, I looped the samples and, again, I transferred the results to the Piano 5. And again, the result was fabulous. Next, I tried a more complex sound to see whether this might fool the software. I took a dual‑oscillator‑per‑voice polybrass patch and followed the same procedure. Manual looping was required for best results but, once I had done so, the results again sounded superb. Finally, I used the Sample Editor to load a handful of discrete samples into the Piano 5, so that I could trigger them from individual notes. The only thing that I missed in all of this was ‘alternate’ looping, so I hope that Clavia will one day add this.

So now we come to perhaps the biggest upgrade in the new model. Previous Nord Pianos from the Piano 2 through to the Grand have each provided one Piano and one Sample Synth, allowing you to play either, layer the two, or play them either side of one of seven pre‑defined split points. In contrast, the Piano 5 offers two Pianos and two Sample Synths. You can’t distribute these freely across the keyboard, but you can decide whether each lies across the whole keyboard or above or below the split point. You can also transpose any of the layers up or down in octaves, which means that you can program sounds to lie in meaningful ranges in both regions. In addition, you can change the nature of the split point from an instant transition to a crossfade of 12 or 24 semitones width. Unfortunately, transposition (as opposed to octave shifting) is on a per‑program basis rather than a per‑layer basis, so you can’t set up classic sounds such as I/IV/V solo patches or polyphonic sevenths. However, the Piano section allows you to choose one of three degrees of detune between the two piano layers so you can create some amazing honky‑tonks. I accept that that may not be everyone’s target in life, but the results can be great fun.

At the end of the signal path, the Piano 5 seems to offer the same effects as its predecessors, but it doesn’t. To start with, two of the effects sections have been renamed (a trivial change), and their order has been changed (which may or may not be trivial because nowhere does Clavia reveal whether this represents a change in the underlying order in which the effects are applied). Either way, it seems to me that the effects in the Nord Piano have evolved from one wrong order to another wrong order. Dynamics after modulation effects? Really? The effects themselves are largely unchanged although the delay unit now boasts a ping‑pong mode while the reverb now offers a dark mode, models of two additional reverberant spaces, and a Chorale mode that modulates the reverberated signal.

Of course, the ways in which you can use the effects have also been updated to take account of the two new layers. You can apply the Mod 1 effects to Piano A or Piano B or both, or to Synth A or Synth B or both, but not to a mixture of Piano and Synth layers. The same is true of the Mod 2 effects and the amp/compressor effects. This means that you can (for example) apply wah and compression to your Clavinets while at the same time applying phasing to your strings, but you can’t apply wah, compression and phasing to both. In contrast, the EQ and Delay have a global mode that allows you to apply them to all four layers but not to just one of the Pianos plus one of the Synths or to any combinations of three layers. Finally, the reverb, as it has always been, remains global. If you think that this all sounds a bit arcane, you’re right. But don’t worry, the effects routing is far easier to use than it is to explain.

Tying all of these elements together, a Piano 5 Program contains all of the Piano, Sample Synth and Effects settings that comprise your sound. In addition to the five that are immediately accessible via the ‘Live’ Program memories, there are 16 banks of these, each containing 25 Programs arranged as five pages of five. You can swap these around using the Organise function on the Piano 5 itself, but it’s much quicker and easier using the Sound Manager software.