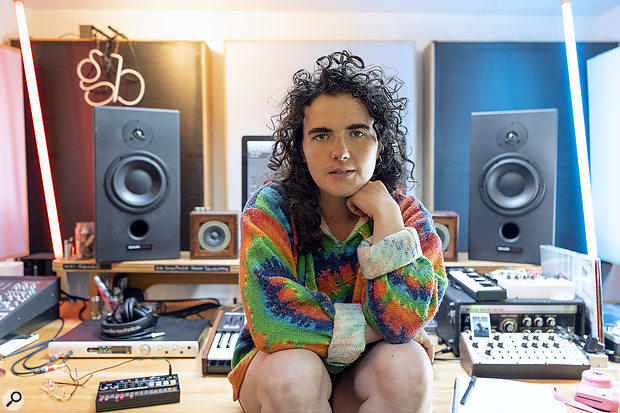 An explosive Glastonbury performance and acclaimed second album have propelled Georgia Barnes into the mainstream.

Few electronic solo projects find themselves at the top of BBC Radio 1's A List, and fewer still are fronted by female drummers. But Georgia Barnes, a DIY producer, self-confessed studio nerd and brilliant drummer and vocalist, is like few other British music makers. Turns out, she was almost born to do it.

"I was brought up in central London in a co-operative living scheme with my parents," she says. "My dad is Neil Barnes from Leftfield, so my bedroom was actually the band's studio where they wrote Leftism."

Her love of clubs should perhaps come as no surprise. She aimed to distill this heady, spinning world of bright lights, beats, and sonic sensations on her new second album, Seeking Thrills. Featuring killer tracks such as 'About Work The Dancefloor' and 'Starting Out', the record draws extensively on Georgia's twin loves: the thumping, minimal world of Chicago house and cooler pop productions of auteurs such as Kate Bush or Soft Cell.

"Some of my motivation came from imagining the '80s, dancing in a club and hearing a track like Donna Summer's 'I Feel Love' for the first time," explains Georgia. "That was the drive for me, for people to feel like they were hearing something new yet at the same time familiar and capable of transporting them to this euphoric dancefloor state."

Despite her dad being a titan of British rave, Georgia never had music thrust upon her by her parents. Rather, she was exposed to studios and live shows, then left to make her own choices about where she wanted her life to head. "My parents bought me guitars and keyboards, and being around Leftfield was obviously very inspiring," she says. "As a kid, I'd get to go to shows and see how music could bring people together in a really positive way.

"But my dad never had too much to do with my own journey as a musician. He let me decide for myself what I wanted to do, which was an attitude I really respected. It meant I had to find my own way."

The gift of a four-track recorder proved to be a pivotal moment for Georgia. She played drums from a very young age but cites getting to grips with the intricacies of recording as a real epiphany.

"Learning the basics of working with tape just blew my mind," she laughs. "Instead of going outside and playing with other kids, I'd spend hours inside learning covers and putting them onto tape. It really set me up for when I began thinking about my own projects. I was able to manage the production side of my music, as it had alway been a part of me."

Georgia's excursions among London's vital underground music scene during the early 2010s coincided with her finding a niche as a session drummer. Balancing an experimental style with enviable skills meant many underground artists sat up and took notice of her talents behind the kit. Suddenly opportunities began appearing.

"By the time I was 18, I was at a good standard as a drummer and started investigating how I could use electronics to enhance my music. I bought an Alesis MIDI module on eBay and came up with a way to hook it up to my computer and...