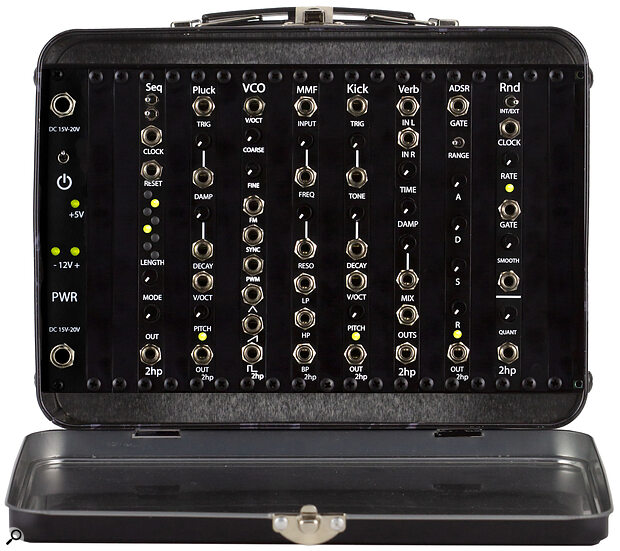 A troublesome 2020 presented American developer 2hp with a host of Covid‑related delays when it came to getting their flagship 42hp Lunchbox systems out and into the world. At long last they managed to start shipping back in November, in a total of four fully housed and powered variations. The Synth Voice hosts 2hp’s envelope, oscillator, filter and VCA modules; the Drum Machine has their kick, snare, hat and mixer modules; the Effects Rack offers 2hp’s ‘Grain’ granular processor, delay, Freez and stereo reverb modules, while the larger and more mysteriously named Picnic Basket — which happens to be the one in my custody — contains a sequencer, Pluck physical modelling unit, a VCO, multimode filter, kick, reverb, ADSR envelope and random voltage generator. Each module is separated by a blank panel: partly to space the modules out a little (a fully stocked 2hp rack can get a little dense), but more crucially to offer space for more modules, the significance of which I’ll come to later.

The Lunchbox case itself is literally an aluminium lunchbox, and even has a little handle on the top so you can take it to school on the bus. It’s cute. Not altogether practical, but cute. The lid opens toward you and isn’t removable, meaning that it does get in the way a little unless you stand it up vertically, where you may well find yourself pushing the whole thing across the table while patching, considering how light it is. 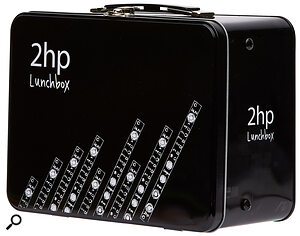 On its own the case retails at around £140, which feels rather pricey considering its size, not to mention the fact that it is literally a tin. It feels slightly paradoxical that while the Lunchbox series’ portability is marketed as one of its main assets, it’s a long way from a flight case and more likely to be treated as fragile than a trusty road‑worn companion. In fact it feels, dare I say it, somewhat rickety. However: it’s light, it’s fun, it is portable and, as I said, it’s cute. It has character. It plays well either by itself or in partnership with a larger system, so doubtless will make an ideal addition to any creative modular environment. You certainly look at it and want to plug it in — an asset not to be underrated in my experience. In this respect, the case and character of the Lunchbox are a great success. Just don’t chuck it in the hold of an aeroplane.

Comparisons will doubtless be drawn between the Picnic Basket and Erica Synths’ Pico System, but it’s more akin to something like Erica’s Black System, in that it’s a collection of 2hp’s flagship modules in a bespoke case and in a curated, albeit customisable, order. I’ve never felt that 2hp, aside from their name, try to peddle their micro format as any kind of novelty or ‘compact’ versions of other modules. Their algorithms are robust and sonically punch well above their (literal) weight, their workflow is inventive and their interfaces are efficient. They also pull no punches when it comes to pushing the envelope with ideas, as demonstrated by things like their recently announced time‑domain pitch‑shifter module. In creating a range of modules that rely a little more on mults, stacking cables and most of all on one another, 2hp are a company who simply make modular a little more... modular.

One frustration with the Picnic Basket’s module selection is that while it promises to be a self‑sufficient system (or in the company website’s words, ‘the complete 2hp experience’), this doesn’t entirely seem to be the case. At the very least it still relies on an external mixer module to cope with its possible eight separate audio outputs, and the noticeable absence of a VCA means the filter becomes more or less the only dynamic control on offer, somewhat limiting its scope for other more creative applications. Here the reason behind leaving space for further modules seems to become a little clearer. It’s easy to imagine unboxing the Picnic Basket and after a matter of minutes hopping straight back onto the 2hp website to order a mixer and a VCA, so obvious is the need for them. It’s equally easy to imagine feeling ever so slightly cheated at this prospect, as the Picnic Basket is not exactly cheap. But, in fairness, it still works out as better value for money than buying its modules and case separately, and since 2hp’s modules are by no means the only units available in their size, the Lunchbox system paves the way for a powerful custom mini‑system of slimline modules from all kinds of developers. Just remember that if you see a 500‑series API preamp and get excited, you’re looking at the wrong kind of lunchbox.

For all my reservations with the Picnic Basket’s case and module selection, the modules themselves are quite simply excellent. The filter is deep and smooth, the Curtis CEM3340 IC‑based VCO is rich and full, and the reverb is lush.

For all my reservations with the Picnic Basket’s case and module selection, the modules themselves are quite simply excellent. The filter is deep and smooth, the Curtis CEM3340 IC‑based VCO is rich and full, and the reverb is lush. Highly impressive too is the Karplus‑Strong driven Pluck physical modelling module, which capably sits among category leaders like Mutable Instruments’ Rings. The sequencer represents possibly the most inventive and impressive use of the 2hp real estate, managing to pack a full 16‑step sequencer with selectable scale, glide and length into its minuscule footprint. The system ships with a set of patch leads and a passive mult, something of a statement of intent from 2hp: to get the most from this you’ll need to be inventive and resourceful with your patching, a challenge I’d imagine to be gratefully accepted by many modular synthesists.

All things considered, the Picnic Basket does more or less exactly what it says on the tin (apologies for that). It looks good, it sounds great and its compact format opens up a huge range of possible applications; from field recording expeditions to porta‑studios in unusual locations. For newcomers it’s a great entry point into the world of modular, and for experienced synthesists it’s a worthy addition to the pallet. Sandwich, anybody?