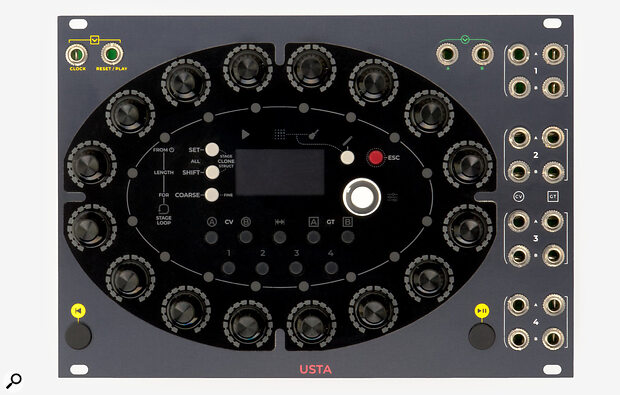 There are a multitude of excellent Eurorack sequencers available in all shapes and sizes. Principally they all fulfil a similar function, which is to generate tuned phrases of movement for your melodies, modulation or whatever else you patch them into, but don’t for a second think that this is best done with a straight line of 16 LEDs. There are a great many inventive and off‑kilter sequencers on the market that may well be the thing to get you out of that patching rut, and perhaps make you rethink sequencing entirely.

With an elliptical layout reminiscent of Buchla’s iconic Model 250e, the USTA is a ‘4x4 track’ sequencer, meaning every stage can store and generate up to four separate voltages. It also boasts variable stage duration and even different clock speeds for different tracks, meaning that it’s not beholden to one tempo. Its oval of 16 LED‑ringed push rotary encoders promise easy hands‑on step editing, not to mention plentiful Euclidean and polyrhythm potential.

A brand‑new contribution from Eventide, the Misha is a sequencer with a pedigree harking back to composer Arnold Schoenberg and the tone‑row methods of Serialism. Its sequencing is based not on note values but on intervals between notes according to a given scale (it hosts 100 factory and 100 user scales). It even has its own oscillator, opening up standalone playability or out‑of‑the‑box sync options with other oscillators in your system. Nice colours, too.

Described by Make Noise as “a powerful three‑dimensional prism of composition,” the René is another sequencer with a weighty conceptual heritage, this time going back to the French philosopher and mathematician René Descartes. Utilising three ‘axes’ across a Cartesian coordinate system, it’s possibly more accurate to think of the René as a time‑based matrix than a sequencer, with its grid of light‑up knobs and corresponding conductive touch‑pads for ultra‑quick editing or performance.

Built around the concept of ‘controlled chance’, the Eloquencer is a rather beautiful sequencer from Winter Modular with the potential for sweeping, complex sequences spanning a whopping 256 steps each. With eight separate CV and gate tracks, you can easily chain patterns and work in larger step counts, as well as apply probability‑based randomness to a wide range of parameters and performatively shift tracks to reallocate steps. If you’re visually minded, you’re going to love the beautiful, big sequence display in the middle, as well as the lush OLED screen to the left of the panel.

In some ways 2hp’s 16‑step Seq is the most conventional sequencer on this list, with adjustable portamento, length and playback mode and a nifty eight‑LED display; but with its minuscule footprint and single CV output it expertly toes the line between modulation and sequencing, opening up worlds of potential new approaches. Chain several together, for example, for some seriously sequenceable modulation power, or use one in conjunction with any of the other sequencers above to sprinkle quantised magic dust over any of your modifiers.